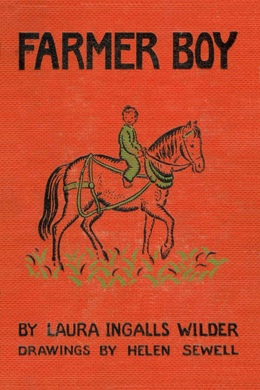 Growing up on his family’s farm in New York, Almanzo Wilder wishes for just one thing–his very own horse. But Father doesn’t yet trust him with such a big responsibility. Almanzo needs to prove himself–but how? Almanzo’s story as a young man, Almanzo Wilder will meet a brown-eyed, brown-haired girl named Laura Ingalls and fall in love. But as a young boy, Almanzo has no time for girls! His life is about farming and chores, and most of all, about wanting his own horse. Before his dreams can come true, Almanzo must prove to his father that he is ready to take on more responsibilities - and this is harder than he ever imagined.

It was January in northern New York State, sixty-seven years ago. Snow lay deep everywhere. It loaded the bare limbs of oaks and maples and beeches, it bent the green boughs of cedars and spruces down into the drifts. Billows of snow covered the fields and the stone fences.

Down a long road through the woods a little boy trudged to school, with his big brother Royal and his two sisters, Eliza Jane and Alice. Royal was thirteen years old, Eliza Jane was twelve, and Alice was ten. Almanzo was the youngest of all, and this was his first going-to-school, because he was not quite nine years old. He had to walk fast to keep up with the others, and he had to carry the dinner-pail.

“Royal ought to carry it,” he said. “He’s bigger than I be.” Royal strode ahead, big and manly in boots, and Eliza Jane said: “No, ‘Manzo. It’s your turn to carry it now, because you’re the littlest.” Eliza Jane was bossy. She always knew what was best to do, and she made Almanzo and Alice do it.

Almanzo hurried behind Royal, and Alice hurried behind Eliza Jane, in the deep paths made by bobsled runners. On each side the soft snow was piled high. The road went down a long slope, then it crossed a little bridge and went on for a mile through the frozen woods to the schoolhouse.

The cold nipped Almanzo’s eyelids and numbed his nose, but inside his good woolen clothes he was warm. They were all made from the wool of his father’s sheep. His underwear was creamy white, but Mother had dyed the wool for his outside clothes. Butternut hulls had dyed the thread for his coat and his long trousers. Then Mother had woven it, and she had soaked and shrunk the cloth into heavy, thick fullcloth. Not wind nor cold nor even a drenching rain could go through the good fullcloth that Mother made. For Almanzo’s waist she had dyed fine wool as red as a cherry, and she had woven a soft, thin cloth. It was light and warm and beautifully red.

Almanzo’s long brown pants buttoned to his red waist with a row of bright brass buttons, all around his middle. The waist’s collar buttoned snugly up to his chin, and so did his long coat of brown fullcloth. Mother had made his cap of the same brown fullcloth, with cozy ear-flaps that tied under his chin. And his red mittens were on a string that went up the sleeves of his coat and across the back of his neck. That was so he couldn’t lose them.

He wore one pair of socks pulled snug over the legs of his underdrawers, and another pair outside the legs of his long brown pants, and he wore moccasins. They were exactly like the moccasins that Indians wore.

Girls tied heavy veils over their faces when they went out in winter. But Almanzo was a boy, and his face was out in the frosty air. His cheeks were red as apples and his nose was redder than a cherry, and after he had walked a mile and a half he was glad to see the schoolhouse.

It stood lonely in the frozen woods, at the foot of Hardscrabble Hill. Smoke was rising from the chimney, and the teacher had shoveled a path through the snowdrifts to the door. Five big boys were scuffling in the deep snow by the path.

Almanzo was frightened when he saw them. Royal pretended not to be afraid, but he was. They were the big boys from Hardscrabble Settlement, and everybody was afraid of them. They smashed little boys’ sleds, for fun. They’d catch a little boy and swing him by his legs, then let him go headfirst into the deep snow. Sometimes they made two little boys fight each other, though the little boys didn’t want to fight and begged to be let off.

These big boys were sixteen or seventeen years old and they came to school only in the middle of the winter term. They came to thrash the teacher and break up the school. They boasted that no teacher could finish the winter term in that school, and no teacher ever had. This year the teacher was a slim, pale young man. His name was Mr. Corse. He was gentle and patient, and never whipped little boys because they forgot how to spell a word. Almanzo felt sick inside when he thought how the big boys would beat Mr. Corse. Mr. Corse wasn’t big enough to fight them.

There was a hush in the schoolhouse and you could hear the noise the big boys were making outside. The other pupils stood whispering together by the big stove in the middle of the room. Mr. Corse sat at his desk. One thin cheek rested on his slim hand and he was reading a book. He looked up and said pleasantly:

Royal and Eliza Jane and Alice answered him politely, but Almanzo did not say anything. He stood by the desk, looking at Mr. Corse. Mr. Corse smiled at him and said:

“Do you know I’m going home with you tonight?” Almanzo was too troubled to answer.

Every family in the district boarded the teacher for two weeks. He went from farm to farm till he had stayed two weeks at each one. Then he closed school for that term.