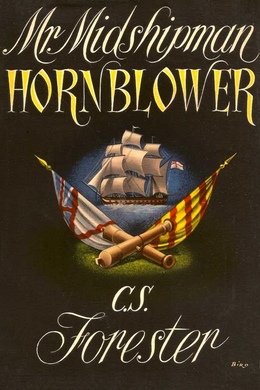 The year is 1793, the eve of the Napoleonic Wars, and Horatio Hornblower, a seventeen-year-old boy unschooled in seafaring and the ways of seamen, is ordered to board a French merchant ship and take command of crew and cargo for the glory of England. Though not an unqualified success, this first naval adventure teaches the young midshipman enough to launch him on a series of increasingly glorious exploits. This novel–in which young Horatio gets his sea legs, proves his mettle, and shows the makings of the legend he will become–is the first of the eleven swashbuckling Hornblower tales that are today regarded as classic adventure stories of the sea.

A January gale was roaring up the Channel, blustering loudly, and bearing in its bosom rain squalls whose big drops rattled loudly on the tarpaulin clothing of those among the officers and men whose duties kept them on deck. So hard and so long had the gale blown that even in the sheltered waters of Spithead the battleship moved uneasily at her anchors, pitching a little in the choppy seas, and snubbing herself against the tautened cables with unexpected jerks. A shore boat was on its way out to her, propelled by oars in the hands of two sturdy women; it danced madly on the steep little waves, now and then putting its nose into one and sending a sheet of spray flying aft. The oarswoman in the bow knew her business, and with rapid glances over her shoulder not only kept the boat on its course but turned the bows into the worst of the waves to keep from capsizing. It slowly drew up along the starboard side of the Justinian, and as it approached the mainchains the midshipman of the watch hailed it.

“Aye aye” came back the answering hail from the lusty lungs of the woman at the stroke oar; by the curious and ages-old convention of the Navy the reply meant that the boat had an officer on board–presumably the huddled figure in the sternsheets looking more like a heap of trash with a boat-cloak thrown over it.

That was as much as Mr. Masters, the lieutenant of the watch, could see; he was sheltering as best he could in the lee of the mizzen-mast bitts, and in obedience to the order of the midshipman of the watch the boat drew up towards the mainchains and passed out of his sight. There was a long delay; apparently the officer had some difficulty in getting up the ship’s side. At last the boat reappeared in Master’s field of vision; the women had shoved off and were setting a scrap of lugsail, under which the boat, now without its passenger, went swooping back towards Portsmouth, leaping on the waves like a steeplechaser. As it departed Mr. Masters became aware of the near approach of someone along the quarterdeck; it was the new arrival under the escort of the midshipman of the watch, who, after pointing Masters out, retired to the mainchains again. Mr. Masters had served in the Navy until his hair was white; he was lucky to have received his commission as lieutenant, and he had long known that he would never receive one as captain, but the knowledge had not greatly embittered him, and he diverted his mind by the study of his fellow men.

So he looked with attention at the approaching figure. It was that of a skinny young man only just leaving boyhood behind, something above middle height, with feet whose adolescent proportions to his size were accentuated by the thinness of his legs and his big half-boots. His gawkiness called attention to his hands and elbows. The newcomer was dressed in a badly fitting uniform which was soaked right through by the spray; a skinny neck stuck out of the high stock, and above the neck was a white bony face. A white face was a rarity on the deck of a ship of war, whose crew soon tanned to a deep mahogany, but this face was not merely white; in the hollow cheeks there was a faint shade of green–clearly the newcomer had experienced sea-sickness in his passage out in the shore boat. Set in the white face were a pair of dark eyes which by contrast looked like holes cut in a sheet of paper; Masters noted with a slight stirring of interest that the eyes, despite their owner’s seasickness, were looking about keenly, taking in what were obviously new sights; there was a curiosity and interest there which could not be repressed and which continued to function notwithstanding either seasickness or shyness, and Mr. Masters surmised in his far-fetched fashion that this boy had a vein of caution or foresight in his temperament and was already studying his new surroundings with a view to being prepared for his next experiences. So might Daniel have looked about him at the lions when he first entered their den.

The dark eyes met Masters’, and the gawky figure came to a halt, raising a hand selfconsciously to the brim of his dripping hat. His mouth opened and tried to say something, but closed again without achieving its object as shyness overcame him, but then the newcomer nerved himself afresh and forced himself to say the formal words he had been coached to utter.

“Your name?” asked Masters, after waiting for it for a moment.

“Very good, Mr. Hornblower” said Masters, with the equally formal response. “Did you bring your dunnage aboard with you?”

Hornblower had never heard that word before, but he still had enough of his wits about him to deduce what it meant.