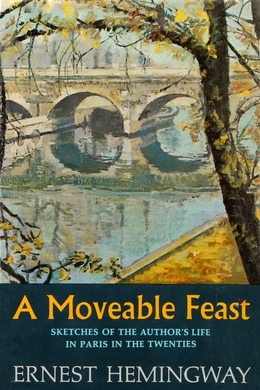 Among these small, reflective sketches are unforgettable encounters with the members of Hemingway’s slightly rag-tag circle of artists and writers, some also fated to achieve fame and glory, others to fall into obscurity. Here, too, is an evocation of the Paris that Hemingway knew as a young man - a map drawn in his distinct prose of the streets and cafes and bookshops that comprised the city in which he, as a young writer, sometimes struggling against the cold and hunger of near poverty, honed the skills of his craft. A Moveable Feast is at once an elegy to the remarkable group for expatriates that gathered in Paris during the twenties and a testament to the risks and rewards of the writerly life.

Then there was the bad weather. It would come in one day when the fall was over. We would have to shut the windows in the night against the rain and the cold wind would strip the leaves from the trees in the Place Contrescarpe. The leaves lay sodden in the rain and the wind drove the rain against the big green autobus at the terminal and the Café des Amateurs was crowded and the windows misted over from the heat and the smoke inside. It was a sad, evilly run café where the drunkards of the quarter crowded together and I kept away from it because of the smell of dirty bodies and the sour smell of drunkenness. The men and women who frequented the Amateurs stayed drunk all of the time, or all of the time they could afford it, mostly on wine which they bought by the half-liter or liter. Many strangely named apéritifs were advertised, but few people could afford them except as a foundation to build their wine drunks on. The women drunkards were called poivrottes which meant female rummies.

The Café des Amateurs was the cesspool of the rue Mouffetard, that wonderful narrow crowded market street which led into the Place Contrescarpe. The squat toilets of the old apartment houses, one by the side of the stairs on each floor with the two cleated cement shoe-shaped elevations on each side of the aperture so a locataire would not slip, emptied into cesspools which were emptied by pumping into horse-drawn tank wagons at night. In the summer time, with all windows open, we would hear the pumping and the odor was very strong. The tank wagons were painted brown and saffron color and in the moonlight when they worked the rue Cardinal Lemoine their wheeled, horse-drawn cylinders looked like Braque paintings. No one emptied the Café des Amateurs though, and its yellowed poster stating the terms and penalties of the law against public drunkenness was as flyblown and disregarded as its clients were constant and ill-smelling.

All of the sadness of the city came suddenly with the first cold rains of winter, and there were no more tops to the high white houses as you walked but only the wet blackness of the street and the closed doors of the small shops, the herb sellers, the stationery and the newspaper shops, the midwife—second class—and the hotel where Verlaine had died where I had a room on the top floor where I worked.

It was either six or eight flights up to the top floor and it was very cold and I knew how much it would cost for a bundle of small twigs, three wire-wrapped packets of short, half-pencil length pieces of split pine to catch fire from the twigs, and then the bundle of half-dried lengths of hard wood that I must buy to make a fire that would warm the room. So I went to the far side of the street to look up at the roof in the rain and see if any chimneys were going, and how the smoke blew. There was no smoke and I thought about how the chimney would be cold and might not draw and of the room possibly filling with smoke, and the fuel wasted, and the money gone with it, and I walked on in the rain. I walked down past the Lycée Henri Quatre and the ancient church of St.-Étienne-du-Mont and the windswept Place du Panthéon and cut in for shelter to the right and finally came out on the lee side of the Boulevard St.-Michel and worked on down it past the Cluny and the Boulevard St.-Germain until I came to a good café that I knew on the Place St.-Michel.

It was a pleasant café, warm and clean and friendly, and I hung up my old waterproof on the coat rack to dry and put my worn and weathered felt hat on the rack above the bench and ordered a café au lait. The waiter brought it and I took out a notebook from the pocket of the coat and a pencil and started to write. I was writing about up in Michigan and since it was a wild, cold, blowing day it was that sort of day in the story. I had already seen the end of fall come through boyhood, youth and young manhood, and in one place you could write about it better than in another. That was called transplanting yourself, I thought, and it could be as necessary with people as with other sorts of growing things. But in the story the boys were drinking and this made me thirsty and I ordered a rum St. James. This tasted wonderful on the cold day and I kept on writing, feeling very well and feeling the good Martinique rum warm me all through my body and my spirit.

A girl came in the café and sat by herself at a table near the window. She was very pretty with a face fresh as a newly minted coin if they minted coins in smooth flesh with rain-freshened skin, and her hair was black as a crow’s wing and cut sharply and diagonally across her cheek.

I looked at her and she disturbed me and made me very excited. I wished I could put her in the story, or anywhere, but she had placed herself so she could watch the street and the entry and I knew she was waiting for someone. So I went on writing.