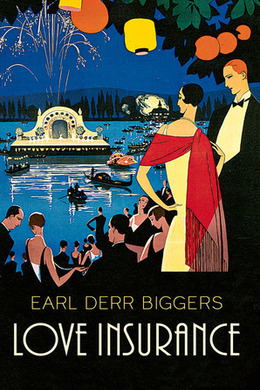 Working for an American branch of Lloyds’ insurers, Owen Jephson is used to underwriting unusual things—weight loss in actors, inconvenient rain at garden parties, twins in the family—nonetheless he is taken aback when Lord Harrowby asks him to insure against his fiancée jilting him at the altar. Never one to turn down an interesting offer, Jephson agrees, but swiftly dispatches Dick Minot to Florida to make sure that Lloyds’ assets are protected and that Cynthia Meyrick makes it down the aisle. Unfortunately Minot promptly falls in love with Cynthia after accidentally meeting her on a train, and has to decide where his loyalties lie—should he sabotage or support the wedding, especially as it comes to light Lord Harrowby may not be all that he seems? This light, sophisticated romcom is guaranteed to charm readers.

Outside a gilt-lettered door on the seventeenth floor of a New York office building, a tall young man in a fur-lined coat stood shivering.

Why did he shiver in that coat? He shivered because he was fussed, poor chap. Because he was rattled, from the soles of his custom-made boots to the apex of his Piccadilly hat. A painful, palpitating spectacle, he stood.

Meanwhile, on the other side of the door, the business of the American branch of that famous marine insurance firm, Lloyds, of London–usually termed in magazine articles “The Greatest Gambling Institution in the World”–went on oblivious to the shiverer who approached.

The shiverer, with a nervous movement shifted his walking-stick to his left hand, and laid his right on the door-knob. Though he is not at his best, let us take a look at him. Tall, as has been noted, perfectly garbed after London’s taste, mild and blue as to eye, blond as to hair. A handsome, if somewhat weak face. Very distinguished–even aristocratic–in appearance. Perhaps–the thrill for us democrats here!–of the nobility. And at this moment sadly in need of a generous dose of that courage that abounds–see any book of familiar quotations–on the playing fields of Eton.

Utterly destitute of the Eton or any other brand, he pushed open the door. The click of two dozen American typewriters smote upon his hearing. An office boy of the dominant New York race demanded in loud indiscreet tones his business there.

“My business,” said the tall young man weakly, “is with Lloyds, of London.”

The boy wandered off down that stenographer-bordered lane. In a moment he was back.

“Mr. Thacker’ll see you,” he announced.

He followed the boy, did the tall young man. His courage began to return. Why not? One of his ancestors, graduate of those playing fields, had fought at Waterloo.

Mr. Thacker sat in plump and genial prosperity before a polished flat-top desk. Opposite him, at a desk equally polished, sat an even more polished young American of capable bearing. For an embarrassed moment the tall youth in fur stood looking from one to the other. Then Mr. Thacker spoke:

“You have business with Lloyds?”

“I–I hope to have–yes.” There was in his speech that faint suggestion of a lisp that marks many of the well-born of his race. Perhaps it is the golden spoon in their mouths interfering a bit with their diction.

“What can we do for you?” Mr. Thacker was cold and matter-of-fact, like a card index. Steadily through each week he grew more businesslike–and this was Saturday morning.

The visitor performed a shaky but remarkable juggling feat with his walking-stick.

“Well,” said the tall young man desperately “perhaps it would be best for me to make myself known at once. I am Allan, Lord Harrowby, son and heir of James Nelson Harrowby, Earl of Raybrook. And I–I have come here–”

The younger of the Americans spoke, in more kindly fashion:

“You have a proposition to make to Lloyds?”

“Exactly,” said Lord Harrowby, and sank with a sigh of relief into a chair, as though that concluded his portion of the entertainment.

Lord Harrowby writhed in his chair.

“I am sure you will pardon me,” he said, “if I preface my–er–proposition with the statement that it is utterly–fantastic. And if I add also that it should be known to the fewest possible number.”

Mr. Thacker waved his hand across the gleaming surfaces of two desks.

“This is my assistant manager, Mr. Richard Minot,” he announced. “Mr. Minot, you must know, is in on all the secrets of the firm. Now, let’s have it.”

“I am right, am I not,” his lordship continued, “in the assumption that Lloyds frequently takes rather unusual risks?”

“Lloyds,” answered Mr. Thacker, “is chiefly concerned with the fortunes of those who go down to–and sometimes down into–the sea in ships. However, there are a number of non-marine underwriters connected with Lloyds, and these men have been known to risk their money on pretty giddy chances. It’s all done in the name of Lloyds, though the firm is not financially responsible.”

Lord Harrowby got quickly to his feet

“Then it would be better,” he said, relieved, “for me to take my proposition to one of these non-marine underwriters.”

“You’d have to go to London to do that,” he remarked. “Better give us an inkling of what’s on your mind.”

His lordship tapped uneasily at the base of Mr. Thacker’s desk with his stick.

“If you will pardon me–I’d rather not,” he said.