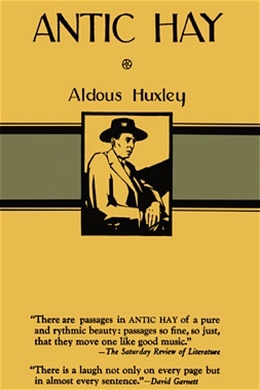 When inspiration leads Theodore Gumbril to design a type of pneumatic trouser to ease the discomfort of sedentary life, he decides the time has come to give up teaching and seek his fortune in the metropolis. He soon finds himself caught up in the hedonistic world of his friends Mercaptan, Lypiatt and the thoroughly civilised Myra Viveash, and his burning ambitions begin to lose their urgency… Wickedly funny and deliciously barbed, the novel epitomises the glittering neuroticism of the Twenties.

Gumbril, Theodore Gumbril Junior, B.A. Oxon., sat in his oaken stall on the north side of the School Chapel and wondered, as he listened through the uneasy silence of half a thousand schoolboys to the First Lesson, pondered, as he looked up at the vast window opposite, all blue and jaundiced and bloody with nineteenth-century glass, speculated in his rapid and rambling way about the existence and the nature of God.

Standing in front of the spread brass eagle and fortified in his convictions by the sixth chapter of Deuteronomy (for this first Sunday of term was the Fifth after Easter), the Reverend Pelvey could speak of these things with an enviable certainty. ‘Hear, O Israel,’ he was booming out over the top of the portentous Book: ‘the Lord our God is one Lord.’

In the great window opposite, young David stood like a cock, crowing on the dunghill of a tumbled giant. From the middle of Goliath’s forehead there issued, like a narwhal’s budding horn, a curious excrescence. Was it the embedded pebble? Or perhaps the giant’s married life?

No, but seriously, Gumbril reminded himself, the problem was very troublesome indeed. God as a sense of warmth about the heart, God as exultation, God as tears in the eyes, God as a rush of power or thought–that was all right. But God as truth, God as 2+2=4–that wasn’t so clearly all right. Was there any chance of their being the same? Were there bridges to join the two worlds? And could it be that the Reverend Pelvey, M.A., foghorning away from behind the imperial bird, could it be that he had an answer and a clue? That was hardly believable. Particularly if one knew Mr Pelvey personally. And Gumbril did.

‘And these words which I command thee this day,’ retorted Mr Pelvey, ‘shall be in thine heart.’

Or in the heart, or in the head? Reply, Mr Pelvey, reply. Gumbril jumped between the horns of the dilemma and voted for other organs.

Diligently unto thy children…. Gumbril remembered his own childhood; they had not been very diligently taught to him. ‘Beetles, black beetles’–his father had a really passionate feeling about the clergy. Mumbo-jumbery was another of his favourite words. An atheist and an anti-clerical of the strict old school he was. Not that, in any case, he gave himself much time to think about these things; he was too busy being an unsuccessful architect. As for Gumbril’s mother, her diligence had not been dogmatic. She had just been diligently good, that was all. Good; good? It was a word people only used nowadays with a kind of deprecating humorousness. Good. Beyond good and evil? We are all that nowadays. Or merely below them, like earwigs? I glory in the name of earwig. Gumbril made a mental gesture and inwardly declaimed. But good in any case, there was no getting out of that, good she had been. Not nice, not merely molto simpatica–how charmingly and effectively these foreign tags assist one in the great task of calling a spade by some other name!–but good. You felt the active radiance of her goodness when you were near her…. And that feeling, was that less real and valid than two plus two?

The Reverend Pelvey had nothing to reply. He was reading with a holy gusto of ‘houses full of all good things, which thou filledst not, and wells digged, which thou diggedst not, vineyards and olive trees, which thou plantedst not.’

She had been good and she had died when he was still a boy; died–but he hadn’t been told that till much later–of creeping and devouring pain. Malignant disease–oh, caro nome!

‘Thou shalt fear the Lord thy God,’ said Mr Pelvey.

Even when the ulcers are benign; thou shalt fear. He had travelled up from school to see her, just before she died. He hadn’t known that she was going to die, but when he entered her room, when he saw her lying so weakly in the bed, he had suddenly begun to cry, uncontrollably. All the fortitude, the laughter even, had been hers. And she had spoken to him. A few words only; but they had contained all the wisdom he needed to live by. She had told him what he was, and what he should try to be, and how to be it. And crying, still crying, he had promised that he would try.

‘And the Lord commanded us to do all these statutes,’ said Mr Pelvey, ‘for our good always, that he might preserve us alive, as it is at this day.’