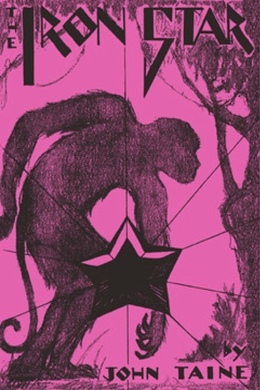 Swain, one member of an African expedition, becomes demented and attempts to exterminate a peculiar species of African ape. The other members of the expedition are befriended by an intelligent ape called the Captain. The expedition discover that the apes are in fact humans that have evolved in reverse due to exposure to a meteor and that the Captain was once human.

Young Doctor Colton was puzzled. His patient, a grizzled, muscular man of about forty-five, showed no signs of a nervous breakdown, nor was there any evidence of organic disease. Swain had stripped to the skin, and the long drawn out examination left no part of his anatomy unexplored. Yet it had disclosed precisely nothing. Nevertheless he was a very sick man, in fact sicker than he himself guessed.

Twenty years as a medical missionary in the fever-ridden swamps and jungles of the upper Congo had sapped his vitality and rotted his character to its very roots. In his secret heart Swain knew what ailed him, yet such was his disorder that he strove to deceive even himself as to its true nature.

Once as frank and open as the day, the ex-missionary now was as tricky a liar as ever fooled a doctor. Five years after his return to America Swain had sought out Colton–“Colton of Chicago”–the brilliant leader in tropical medicine, with the self-avowed purpose of being cured, but with the subconscious desire to prove himself incurable and smarter than any physician living. And now, gloating over the doctor’s puzzled frown, he felt that he had triumphed.

As he buttoned up his shirt and fastened his collar, he experienced a subtle thrill of simian cunning. Like a clever ape making a monkey of its master, he, the humble missionary, with no more science presumably than sufficed to reduce a fracture or prescribe for a colic, had routed the great Colton on his own specialty.

His disease was tropical because it had been contracted in the tropics. But neither Colton nor any other minister to human ills could name the disorder, for it was not human. Swain knew that henceforth he could sin in perfect security. If tropical medicine at its brainiest, as represented by Colton, was powerless to detect him, the Chicago police could spread no net to snare his nimble feet.

“So you don’t know what is the matter with me?” he asked with an ironical smile. “I was told you are the best man in America on tropical diseases.”

“You are ill,” he replied slowly. “A country druggist could see that much. But I am not sure that you have come to the right man, in spite of your twenty years in the tropics.” He paused, and gazed out over the flashing waters of the lake while Swain tied his shoes. “By the way,” he resumed casually, “have you ever used drugs?”

An expression of virtuous obstinacy deepened the severe lines about the eyes and mouth of the retired missionary.

“I prefer to think,” he replied with puritanical precision, “that I contracted some obscure tropical fever during my work in Africa.”

“You do not deny that you have taken harmful drugs?” Colton persisted.

For a fraction of a second Swain hesitated. His code had long since grown sufficiently elastic to embrace lies, provided they were white, or at worst gray. With a truly animal craftiness he decided that a frank statement of the whole truth would be more deceptive than a white lie.

“No,” he said, with a defiant glance at the skeptical physician, “I have never been a drug addict. I have been tempted, often, to sink to the level of the degenerate natives whom I tried to rescue. But I never gave way. You would not call the occasional use of veronal for insomnia a harmful habit, would you?”

“That depends upon what you consider ‘occasional’,” the doctor retorted dryly. “But I need not press the point, if veronal is your only weakness. You are not a victim of that particular foolishness–at least not yet. Something else, some less obvious vice, is at the root of your trouble.” His manner abruptly hardened. “It isn’t veronal, or morphine, or chloral that has made you what you are. Those things are rather hard to get, I imagine, in the jungles of the Congo. But,” and his voice stung like a whip, “you discovered some rottener beastliness in that forsaken hole, and you are its slave. No doctor on earth can do you one particle of good so long as you use your perverted ingenuity to conceal your trouble. Come on, now, confess. Then I may be able to help you. Otherwise you might as well pitch your money out of the window.”

“I came to your office to consult you about my health, not to be insulted. Good afternoon.”

Colton laughed good humoredly. He thought he understood the tantrums of the sick, and he did, provided the patient was an ordinary human being.

“All right, Mr. Swain, if you choose to take it that way there will be no fee. So you can save your money to throw in the lake. It will be less of a waste. Drop in again when you feel like talking.”