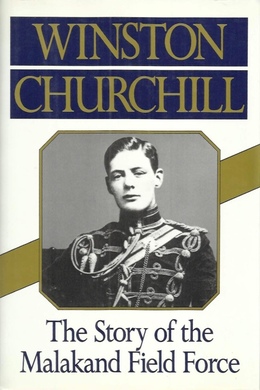 The Story of the Malakand Field Force

An Episode of Frontier War

In his first book, the renowned statesman and historian chronicles an 1897 British military campaign on the Northwest Frontier, in the vicinity of modern Pakistan and Afghanistan. Churchill served as a correspondent and cavalry officer in the conflict, and his incisive reportage reflects the energy and vision that re-emerged in his leadership during World War II.

At the time of the clash, Churchill was serving as a subaltern in the 4th Hussars. Weary of regimental life, the young soldier drew upon family connections to find a place among the brigades headed for the frontier. There he participated in his first combat in the Mamund Valley, where British troops suppressed a revolt among the region’s Pathan tribes. Churchill’s series of letters to the London Daily Telegraph formed the basis for this book, which he declared “the most noteworthy act of my life,” reflecting “the chances of my possible success in the world.” A century later, the towering historical figure’s account of military action in this still-volatile region remains powerfully relevant.

All along the north and north-west frontiers of India lie the Himalayas, the greatest disturbance of the earth’s surface that the convulsions of chaotic periods have produced. Nearly four hundred miles in breadth and more than sixteen hundred in length, this mountainous region divides the great plains of the south from those of Central Asia, and parts as a channel separates opposing shores, the Eastern Empire of Great Britain from that of Russia. The western end of this tumult of ground is formed by the peaks of the Hindu Kush, to the south of which is the scene of the story these pages contain. The Himalayas are not a line, but a great country of mountains. By one who stands on some lofty pass or commanding point in Dir, Swat or Bajaur, range after range is seen as the long surges of an Atlantic swell, and in the distance some glittering snow peak suggests a white-crested roller, higher than the rest. The drenching rains which fall each year have washed the soil from the sides of the hills until they have become strangely grooved by numberless water-courses, and the black primeval rock is everywhere exposed. The silt and sediment have filled the valleys which lie between, and made their surface sandy, level and broad. Again the rain has cut wide, deep and constantly-changing channels through this soft deposit; great gutters, which are sometimes seventy feet deep and two or three hundred yards across. These are the nullahs. Usually the smaller ones are dry, and the larger occupied only by streams; but in the season of the rains, abundant water pours down all, and in a few hours the brook has become an impassable torrent, and the river swelled into a rolling flood which caves the banks round which it swirls, and cuts the channel deeper year by year.

From the level plain of the valleys the hills rise abruptly. Their steep and rugged slopes are thickly strewn with great rocks, and covered with coarse, rank grass. Scattered pines grow on the higher ridges. In the water-courses the chenar, the beautiful eastern variety of the plane tree of the London squares and Paris boulevards, is occasionally found, and when found, is, for its pleasant shade, regarded with grateful respect. Reaching far up the sides of the hills are tiers of narrow terraces, chiefly the work of long-forgotten peoples, which catch the soil that the rain brings down, and support crops of barley and maize. The rice fields along both banks of the stream display a broad, winding strip of vivid green, which gives the eye its only relief from the sombre colours of the mountains.

In the spring, indeed, the valleys are brightened by many flowers–wild tulips, peonies, crocuses and several kinds of polyanthus; and among the fruits the water melon, some small grapes and mulberries are excellent, although in their production, nature is unaided by culture. But during the campaign, which these pages describe, the hot sun of the summer had burnt up all the flowers, and only a few splendid butterflies, whose wings of blue and green change colour in the light, like shot silk, contrasted with the sternness of the landscape.

The valleys are nevertheless by no means barren. The soil is fertile, the rains plentiful, and a considerable proportion of ground is occupied by cultivation, and amply supplies the wants of the inhabitants.

The streams are full of fish, both trout and mahseer. By the banks teal, widgeon and wild duck, and in some places, snipe, are plentiful. Chikor, a variety of partridge, and several sorts of pheasants, are to be obtained on the hills.

Among the wild animals of the region the hunter may pursue the black or brown mountain bear, an occasional leopard, markhor, and several varieties of wild goat, sheep and antelope. The smaller quadrupeds include hares and red foxes, not unlike the British breed, only with much brighter coats, and several kinds of rats, some of which are very curious and rare. Destitute of beauty but not without use, the scaly ant-eater is frequently seen; but the most common of all the beasts is an odious species of large lizard, nearly three feet long, which resembles a flabby-skinned crocodile and feeds on carrion. Domestic fowls, goats, sheep and oxen, with the inevitable vulture, and an occasional eagle, complete the fauna.

Over all is a bright blue sky and powerful sun. Such is the scenery of the theatre of war.