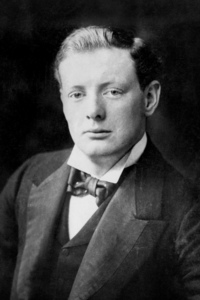 In addition to his careers of soldier and politician, Churchill was a prolific writer. After being commissioned into the 4th Queen’s Own Hussars in 1895, Churchill gained permission to observe the Cuban War of Independence, and sent war reports to The Daily Graphic. He continued his war journalism in British India, at the Siege of Malakand, then in the Sudan during the Mahdist War and in southern Africa during the Second Boer War.

Churchill’s fictional output included one novel and a short story, but his main output comprised non-fiction. After he was elected as an MP, over 130 of his speeches or parliamentary answers were also published in pamphlets or booklets; many were subsequently published in collected editions. Churchill received the Nobel Prize in Literature in 1953 “for his mastery of historical and biographical description as well as for brilliant oratory in defending exalted human values”.

A fast-paced thriller written near the end of Queen Victoria’s reign when Great Britain ruled a worldwide empire, it subtly reveals the political awaren...read more »

Here Sir Winston S. Churchill tells the tale of the Anglo-Egyptian reconquest of the Sudan. It isn’t just an account of the battles and the politics; it...read more »

The Story of the Malakand Field Force (1898)

In his first book, the renowned statesman and historian chronicles an 1897 British military campaign on the Northwest Frontier, in the vicinity of moder...read more »