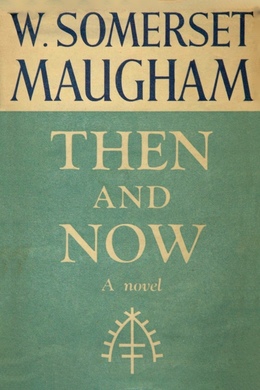 Maugham found a parallel to the turmoil of our own times in the duplicity, intrigue and sensuality of the Italian Renaissance. Then and Now enters the world of Machiavelli, and covers three important months in the career of that crafty politician, worldly seducer and high priest of schemers.

Biagio Buonaccorsi had had a busy day. He was tired, but being a man of methodical habit before going to bed made a note in his diary. It was brief: “The City sent a man to Imola to the Duke.” Perhaps because he thought it of no importance he did not mention the man’s name: it was Machiavelli. The Duke was Caesar Borgia.

It had been not only a busy day, but a long one, for Biagio had set forth from his house at dawn. With him on a stout pony went his nephew, Piero Giacomini, whom Machiavelli had consented to take with him. It happened to be Piero’s eighteenth birthday, October 6th, 1502, and so was a fitting day for him to go out into the world for the first time. He was a well-set-up youth, tall for his age and of an agreeable aspect. Under his uncle’s guidance, for his mother was a widow, he had received a good education; he could write a good hand and turn a comely phrase not only in Italian, but in Latin. On the advice of Machiavelli, who passionately admired the ancient Romans, he had acquired more than a cursory knowledge of their history. Machiavelli cherished the conviction that men are always the same and have the same passions, so that when circumstances are similar the same causes must lead to the same effects; and thus, by bearing in mind how the Romans coped with a given situation men of a later day might conduct themselves with prudence and efficiency. It was the wish both of Biagio and his sister that Piero should enter the government service in which Biagio held a modest post under his friend Machiavelli. The mission on which Machiavelli was now going seemed a good opportunity for the boy to learn something of affairs, and Biagio knew that he could not have a better mentor. The matter had been settled on the spur of the moment, for it was only the day before that Machiavelli had been given his letter of credence to the Duke and his safe-conduct. Machiavelli was of an amiable disposition, a friend of his friends, and when Biagio asked him to take Piero with him immediately agreed. But the lad’s mother, though she saw that it was a chance that could not be missed, was uneasy. He had never been parted from her before and he was young to go out into a hostile world; he was besides a good boy and she was afraid that Machiavelli would corrupt him, for it was notorious that Machiavelli was a gay fellow and a dissolute. He was, moreover, not in the least ashamed of it and would tell improper stories about his adventures with women of the town and with maidservants at wayside inns which must bring a blush to a virtuous woman’s cheek. And what made it worse was that he told them so amusingly that though outraged you could not keep a straight face. Biagio reasoned with her.

“Dear Francesca, now that Niccolò is married he will abandon his loose habits. Marietta, his wife, is a good woman and she loves him. Why should you think him so foolish as to spend money outside for what he can get at home for nothing?”

“A man who likes women as much as Niccolò will never be content with one,” said she, “and if she is his wife less than ever.”

Biagio thought there was something in what she said, but he was not prepared to admit it. He shrugged his shoulders.

“Piero is eighteen. If he has not lost his innocence already it is quite time he did. Are you a virgin, nephew?”

“Yes,” answered Piero with so much candor that anyone might have been forgiven for believing him.

“There is nothing that I do not know about my son. He is incapable of doing anything of which I should disapprove.”

“In that case,” said Biagio, “there is no reason why you should hesitate to entrust him to a man who can be useful in his career and from whom, if he has sense, he can learn much that will be valuable to him all his life.”

“You are infatuated with the man. You’re like putty in his hands. And how does he treat you? He makes use of you; he makes fun of you. Why should he be your superior in the Chancery? Why are you satisfied to be his subordinate?”

Biagio was of about the same age as Machiavelli, who was thirty-three, but because he had married the daughter of Marsilio Ficino, a celebrated scholar patronized by the Medici who then ruled the city, he had entered the government before him. For in those days influence got a man a job as often as merit. Biagio was of the middle size, plump, with a round face, a high colour and an expression of great good nature. He was honest and hard-working, a man without envy who knew his own limitations and was satisfied with his modest position. He liked good living and good company and since he asked for no more than he could have, might be counted a happy man. He was not brilliant, but neither was he stupid. Had he been so, Machiavelli would not have endured his companionship.