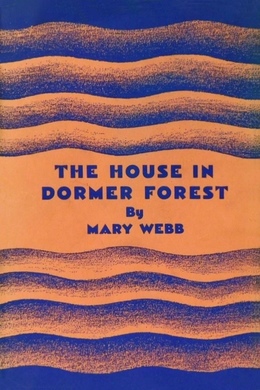 The House in Dormer Forest

In the depths of Dormer Forest, nestling in a valley, lies Dormer Old House, inhabited by the Drake family, Solomon and Rachael with their four grown children: intense, idealistic Jasper, Ruby, pretty but silly, black-eyed Peter and the odd one out, Amber, a girl with a genius for loving – and laughing. There too lives cousin Catherine of the slanting eyes, whose pleasure it is to ensnare men’s hearts. Brooding over all is the great matriarch, Grandmother Velindre, with her religious texts and reprimands, her beady eye ever upon the five young people in serach of love and happiness. As the fate of each unfolds it is Amber who emerges triumphant: one still June morning, she is found under a blossom tree by a strange and noble man…

Dormer Old House stood amid the remnants of primeval woodland that curtained the hills. These rose steeply on all sides of the house, which lay low by the water in the valley. This was called Oolert’s Dingle, and there were plenty of owls to justify the name. On a moonlit night, passing, high up, from side to side of the cuplike valley, they looked like breeze-blown feathers. Higher still, on the very rim of the cup, the far-travelled winds shouted across to one another, all winter, news of the world. When the bats slipped from their purlieus in the cobwebby outbuildings and climbed toward this rim, they had to ascend step after grey step of the windless air, and only attained their ambition after long flying.

From these heights, in fine weather, the house and its gardens lay open to the view, small but clear, beside the white thread that was Dormer brook. The place had been patched and enlarged by successive generations, very much as man’s ideas are altered, the result in both cases being the same—a mansion to the majority, a prison to the few. On clear evenings, when the westering sun struck up the valley and set the windows on fire, one could see the centuries in the house, like ferns in a fossil. There was the timbered black-and-white centre, once the complete house, with diamond lattices and the unassuming solidity of an Elizabethan manor; there was the small Queen Anne wing on the left—one room down and two up—built by a rich ancestor of the Darke family; there was the solemn, Georgian porch with its rounded, shell-like roof and Grecian pillars. The right wing, hideously stuccoed, consisted of one large room with many-paned sash-windows and a steep red roof, and had been built by the father of Solomon Darke, the present owner. At the back, perilously clinging to the Elizabethan farm, was an ancient cottage, which seemed to be the nucleus of the whole, and was built of stone and thatched. When the ambitious Elizabethan set about building his manor, no doubt the two bottle-glass windows of this cottage eyed him reproachfully, as a Vandal and a despiser of his ancestors. It was neglected now, and remained, weighed down by the large-leaved ivy, haunted by its whisper year after year, and used only by Enoch, the gardener, who stored apples there, and by the mice, who consumed the apples. The house, as a whole, had something of a malignant air, as of an old ruler from whom senility takes the power, but not the will, for tyranny.

All these things you could see in clear weather; but when it was misty—and mist lingered here as of inalienable right—the house was obliterated. It vanished like a pebble in a well, with all its cabined and shuttered wraths and woes, all its thunderous ‘thou shalt nots.’ At such times it did not seem that any law ruled in the valley except the law of the white owls and the hasty water and the mazy bat-dances. Only those who slept there night by night could tell you that the house was overspread with a spider’s-web of rules, legends and customs so complex as to render the individual soul almost helpless. It is the mass-ego that constructs dogmas and laws; for while the individual soul is, if free at all, self-poised, the mass-mind is always uncertain, driven by vague, wandering aims; conscious, in a dim fashion, of its own weakness, it builds round itself a grotesque structure in the everlastingness of which it implicitly believes. When each unit of humanity merges itself in the mass, it loses its bearings and must rely on externals. The whole effort of evolution is to the development of individual souls who will dare to be free of the architecture of crowd-morality. For when man is herded, he remembers the savage.