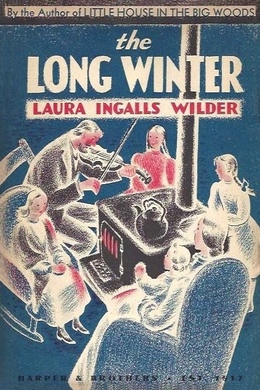 The town of De Smet in the Dakota Territory is hit with terrible blizzards in the hard winter of 1880-81, and the Ingalls family must ration their food and coal. When the supply train doesn’t arrive, all supplies are cut off from the outside. Soon there is almost no food left, so young Almanzo Wilder and a friend must make a dangerous trip in search of provisions.

The mowing machine’s whirring sounded cheerfully from the old buffalo wallow south of the claim shanty, where bluestem grass stood thick and tall and Pa was cutting it for hay.

The sky was high and quivering with heat over the shimmering prairie. Half-way down to sunset, the sun blazed as hotly as at noon. The wind was scorching hot. But Pa had hours of mowing yet to do before he could stop for the night.

Laura drew up a pailful of water from the well at the edge of the Big Slough. She rinsed the brown jug till it was cool to her hand. Then she filled it with the fresh, cool water, corked it tightly, and started with it to the hayfield.

Swarms of little white butterflies hovered over the path. A dragon-fly with gauzy wings swiftly chased a gnat. On the stubble of cut grass the striped gophers were scampering. All at once they ran for their lives and dived into their holes. Then Laura saw a swift shadow and looked up at the eyes and the claws of a hawk overhead. But all the little gophers were safe in their holes.

Pa was glad to see Laura with the water-jug. He got down from the mowing machine and drank a mouthful. “Ah! that hits the spot!” he said, and tipped up the jug again. Then he corked it, and setting it on the ground he covered it with cut grass.

“This sun almost makes a fellow want a bunch of sprouts to make a shade,” he joked. He was really glad there were no trees; he had grubbed so many sprouts from his clearing in the Big Woods, every summer. Here on the Dakota prairies there was not a single tree, not one sprout, not a bit of shade anywhere.

“A man works better when he’s warmed up, anyway!” Pa said cheerfully, and chirruped to the horses. Sam and David plodded on, drawing the machine. The long, steel-toothed blade went steadily whirring against the tall grass and laid it down flat. Pa rode high on the open iron seat, watching it lie down, his hand on the lever.

Laura sat in the grass to watch him go once around. The heat there smelled as good as an oven when bread is baking. The little brown-and-yellow-striped gophers were hurrying again, all about her. Tiny birds fluttered and flew to cling to bending grass-stems, balancing lightly. A striped garter snake came flowing and curving through the forest of grass. Sitting hunched with her chin on her knees, Laura felt suddenly as big as a mountain when the snake curved up its head and stared at the high wall of her calico skirt.

Its round eyes were shining like beads, and its tongue was flickering so fast that it looked like a tiny jet of steam. The whole bright-striped snake had a gentle look. Laura knew that garter snakes will not harm anyone, and they are good to have on a farm because they eat the insects that spoil crops.

It stretched its neck low again and, making a perfectly square turn in itself because it could not climb over Laura, it went flowing around her and away in the grass.

Then the mowing machine whirred louder and the horses came nodding their heads slowly in time with their feet. David jumped when Laura spoke almost under his nose.

“Whoa!” Pa said, startled. “Laura! I thought you’d gone. Why are you hiding in the grass like a prairie chicken?”

Pa lifted his hat and ran his fingers through his sweat-damp hair, standing it all on end and letting the wind blow through it. “You’re not very big nor strong, little Half-Pint.”

The mowing machine had cost so much that Pa had no money left to pay for help. He could not trade work, because there were only a few homesteaders in this new country and they were busy on their own claims. But he needed help to stack the hay.

“Well,” Pa said, “maybe you can. We’ll try it. If you can, by George! we’ll get this haying done all by ourselves!”

Laura could see that the thought was a load off Pa’s mind and she hurried to the shanty to tell Ma.

“Why, I guess you can,” Ma said doubtfully. She did not like to see women working in the fields. Only foreigners did that. Ma and her girls were Americans, above doing men’s work. But Laura’s helping with the hay would solve the problem. She decided, “Yes, Laura, you may.”

Carrie eagerly offered to help. “I’ll carry the drinking water out to you. I’m big enough to carry the jug!” Carrie was almost ten, but small for her age.

“And I’ll do your share of the housework, besides mine,” Mary offered happily. She was proud that she could wash dishes and make beds as well as Laura, though she was blind.

The sun and hot wind cured the cut grass so quickly that Pa raked it up next day. He raked it into long windrows, then he raked the windrows into big haycocks. And early the next morning, while the dawn was still cool and meadow-larks were singing, Laura rode to the field with Pa in the hayrack.