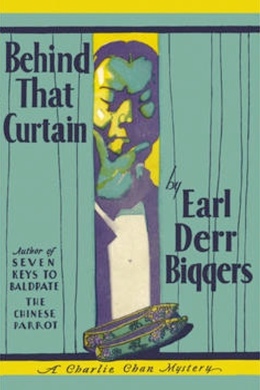 The third novel in the Charlie Chan series, set almost exclusively in California, tells the story of the former head of Scotland Yard, a detective who is pursuing the long-cold trail of a murderer. Fifteen years ago, a London solicitor was killed in circumstances in which the only clue was a pair of Chinese slippers, which he apparently donned just before his death. Sir Frederic Bruce has been following the trail of the killer ever since. He has also been interested in what appears to be a series of disappearing women around the world, which has some connection to the disappearance of a woman named Eve Durand in rural India also fifteen years ago. Just when it seems he might finally solve the murder case, at a dinner party to which a number of important and mysterious guests have been invited, Inspector Bruce is killed – and was last seen wearing a pair of Chinese slippers, which have vanished. It is left to Chan to solve the case and tie up all loose ends.

Bill Rankin sat motionless before his typewriter, grimly seeking a lead for the interview he was about to write. A black shadow shot past his elbow and materialized with a soft thud on his desk. Bill’s heart leaped into his throat and choked him.

But it was only Egbert, the office cat. Pretty lonesome round here, seemed to be Egbert’s idea. How about a bit of play? Rankin glared at the cat with deep disgust. Absurd to be so upset by a mere Egbert, but when one has been talking with a great man for over an hour and the subject of the talk has been murder, one is apt to be a trifle jumpy.

He reached out and pushed Egbert to the floor. “Go away,” he said. “What do you mean, scaring me out of a year’s growth? Can’t you see I’m busy?”

His dignity offended, Egbert stalked off through the desert of typewriter tables and empty chairs. Bill Rankin watched him disappear at last through the door leading into the hallway. The hour was five thirty; the street ten stories below was filled with home-going throngs, but up here in the city room of the Globe a momentary quiet reigned. Alone of all the green-shaded lamps in the room, the one above Rankin’s typewriter was alight, shedding a ghastly radiance on the blank sheet of paper in his machine. Even the copy desk was deserted. In his cubby-hole at the rear sat the Globe’s city editor, the only other human thing in sight. And he was not, if you believed the young men who worked for him, so very human at that.

Bill Rankin turned back to his interview. For a brief moment he sat wrapped in thought; then his long, capable fingers sought the keys. He wrote:

Suddenly Bill Rankin stopped writing and sat erect in his uncomfortable chair. There was a familiar ring to the ideas he was setting down on paper; he had heard them before, and recently. Opinions identical with these, expressed not in the polished English of Sir Frederic, but in a quite different idiom—-Ah yes. He smiled, recalling that pudgy little man he had interviewed three days ago in the lobby of the Stewart Hotel.

The reporter rose from his chair and, lighting a cigarette, began to pace the floor. He spoke aloud: “Of course–and I never thought of it. A corking feature story staring me right in the face, and I was blind–blind. I must be losing my grip.” He looked anxiously at the clock, tossed aside his cigarette and resumed his chair. Completing the sentence which he had interrupted midway, he continued: