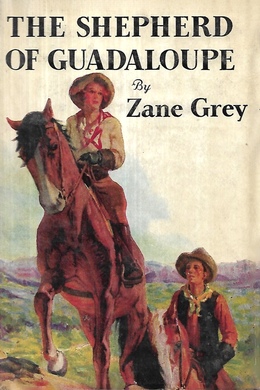 The Shepherd of Guadaloupe

A soldier returns home to find his parents displaced and their property stolen in this classic Western.

After surviving the brutality of the First World War, Clifton Forrest returns home to find that his childhood home was stolen from his family. With his parents robbed of their property and the area under the firm control of his old acquaintance, Lundeen, Cliff must fight both his enemy and his ailing body to regain the right to a peaceful life on the land he once called home.

The sea out there, dark and heaving, somehow reminded Forrest of the rolling rangeland of his beloved West, which he prayed to see once more, before he succumbed to havoc the war had done his body and soul.

He leaned propped against the rail of the great ship, in an obscure place aft, shadowed by the life-boats. It was the second night out of Cherbourg and the first time for him to be on deck. The ridged and waved Atlantic, but for its turbulence, looked like the desert undulating away to the uneven horizon. The roar of the wind in the rigging bore faint resemblance to the wind in the cottonwoods at home–a sound that had haunted him for all the long years of his absence. There was the same mystery in the black hollows of the sea as from boyhood he had seen and feared in the gloomy gulches of the foothills.

But he hated this restless, unstable, treacherous sea which seemed a part of the maelstrom in which he had been involved. He yearned for the mountains, the desert, the valley of cottonwoods, home and mother, far across this waste of waters, those dear remembered ties of the past that still survived. The emotion had only come strong during those moments when, ignoring his weakness and pain, he had clung to the rail, gazing into the pale obscurity of the night, out over the boundless ocean, with the consciousness that the dream that had mocked him during nine months on a hospital cot had become a reality. He was on the way home–home to Cottonwoods!

He visualized the winding valley between the silver hills beautiful with the green-gold trees that gave their name to the place; the rocky stream that wound leisurely down, bordered by sage and willow, bringing the blue-tinted snow water from the mountains; the old rambling Spanish ranch house, white-walled, with the vines climbing up to the red tiles.

This retrospect seemed to release him from the vise of the war horrors that had clamped him. It would be best, now he was going home, to live in thought of the brief future allotted him; and his mind clutched at the revivifying memories.

There had been changes at home, his mother’s recent letter had intimated–a strange letter coming many months after a long silence, full of thanksgiving and joy that the report of his being among the missing had been erroneous, and evidently stultified over ills she had not the courage to confide. Thinking back, Forrest recalled a letter here, another there, widely separated, the content of which had not augured well for the prosperity of the Forrests. But he had dismissed them with a bitter laugh of recollection at the absurd idea of Clay Forrest, his father, ever losing land or stock enough to matter.

How would he find things at home? The query gave him a pang, for that thought had been seldom in his mind. He hoped now to find his parents well, and surely, in view of his service to his country and the supreme sacrifice he was soon to make, they would forgive the disgrace he had brought upon them. How long ago that expulsion from college! It seemed so trivial now, the cards, the drunkenness, the fight which had ended his school career. He had tramped and worked, now a rolling stone, and again a young man in whom hope could not wholly die. Then 1914 and the war! And now, broken in body and mind, victim of an appalling chaos, like thousands of other young men who had sustained a brutal and terrible affront to faith, honor, patriotism, love, he was voyaging across the ocean, battling the gray specter that hung grimly on his trail, longing for the land of his birth, the wide sweep of the Western ranges, the sage, the cottonwoods–there gladly to lay down the burden.

The huge black ship plowed on through the sullen sea, spreading the inky billows into white, seething, crashing foam, that raced by with spectral glow and phosphorescent gleam, to pale and fade in the darkness. The funnels roared and emitted bulging clouds of smoke that hid the stars. The mighty iron mass drove on masterfully, as if to fling defiance at nature. Forward along the wide deck bright lights shone on women scantily and beautifully gowned, and men in conventional black, not one of whom, it seemed to Forrest, had a thought of the greedy, mystic sea, or the perilously rushing ship, or the precious life so prodigally theirs.

Forrest left his post and walked along the deck, hiding his limp, and the pangs in his wounded side, and the burn in his breast. He walked erect. These were Americans returning home, and many of them were young. He felt no kinship with them. What was a crippled soldier to these idle, luxurious travelers? But once in his stateroom he sagged, and the face he saw in his mirror dropped its mask. Crawling into his berth, he lay in the dark, listening to the rhythmic pulse of the engines, deep in the bowels of the ship. Alone there with his phantoms in attendance he wooed slumber until at last it mercifully came.