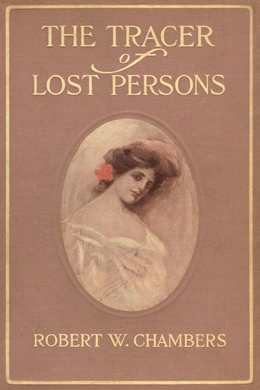 The Tracer of Lost Persons

Mr. Gatewood is a grumpy man whose friend wishes to find a woman to entertain him. A soldier continues to see visions of a woman he’d seen once on a train and wishes to find her before he must return to duty. A young man falls in love with the lifelike remains of an Egyptian dancing girl and wishes for her to come to life. Who do they all turn to in order to have their wishes fulfilled? To the Tracer of Lost Persons, of course! And that would be Mr. Keene, the finder of the women of your dreams!

He was thirty-three, agreeable to look at, equipped with as much culture and intelligence as is tolerated east of Fifth Avenue and west of Madison. He had a couple of elaborate rooms at the Lenox Club, a larger income than seemed to be good for him, and no profession. It follows that he was a pessimist before breakfast. Besides, it’s a bad thing for a man at thirty-three to come to the conclusion that he has seen all the most attractive girls in the world and that they have been vastly overrated. So, when a club servant with gilt buttons on his coat tails knocked at the door, the invitation to enter was not very cordial. He of the buttons knocked again to take the edge off before he entered; then opened the door and unburdened himself as follows:

“Mr. Gatewood, sir, Mr. Kerns’s compliments, and wishes to know if ‘e may ‘ave ‘is coffee served at your tyble, sir.”

Gatewood, before the mirror, gave a vicious twist to his tie, inserted a pearl scarf pin, and regarded the effect with gloomy approval.

“Say to Mr. Kerns that I am–flattered,” he replied morosely; “and tell Henry I want him.”

The servant left; one of the sleek club valets came in, softly sidling.

“I’ll wear a white waistcoat, if you don’t object.”

The valet laid out half a dozen.

“Which one do you usually wear when I’m away, Henry? Which is your favorite?”

“Pick it out and don’t look injured, and don’t roll up your eyes. I merely desire to borrow it for one day.”

“And, Henry, hereafter always help yourself to my best cigars. Those I smoke may injure you. I’ve attempted to conceal the keys, but you will, of course, eventually discover them under that loose tile on the hearth.”

“When you are tired of searching for my olivine and opal pin, just find it, for a change. I’d like to wear that pin for a day or two if it would not inconvenience you.”

Gatewood put on his coat, took hat and gloves from the unabashed valet, and sauntered down to the sunny breakfast room, where he found Kerns inspecting a morning paper and leisurely consuming grapefruit with a cocktail on the side.

“I’m not on the telephone,” snapped Gatewood.

“I beg your pardon; how are you, dear friend?”

“I don’t know how I am,” retorted Gatewood irritably; “how the devil should a man know how he is?”

“Everything going to the bowwows, as usual, dear friend?”

“As usual. Oh, read your paper, Tommy! You know well enough I’m not one of those tail-wagging imbeciles who wakes up in the morning singing like a half-witted lark. Why should I, with this taste in my mouth, and the laundress using vitriol, and Henry sneering at my cigars?” He yawned and cast his eyes toward the ceiling. “Besides, there’s too much gilt all over this club! There’s too much everywhere. Half the world is stucco, the rest rococo. Where’s that Martini I bid for?”

Kerns, undisturbed, applied himself to cocoa and toasted muffins. Grapefruit and an amber-tinted accessory were brought for the other and sampled without mirth. However, a little later Gatewood said: “Well, are you going to read your paper all day?”

“What you need,” said Kerns, laying the paper aside, “is a job–any old kind would do, dear friend.”

“I don’t want to make any more money.”

“I don’t want you to. I mean a job where you’d lose a lot and be scared into thanking Heaven for carfare. You’re a nice object for the breakfast table!”

“Bridge. I will be amiable enough by noon time.”

“Yes, you’re endurable by noon time, as a rule. When you’re forty you may be tolerated after five o’clock; when you’re fifty your wife and children might even venture to emerge from the cellar after dinner–”

“I said wife,” replied Kerns, as he calmly watched his man.

He had managed it well, so far, and he was wise enough not to overdo it. An interval of silence was what the situation required.

“I wish I had a wife,” muttered Gatewood after a long pause.

“Oh, haven’t you said that every day for five years? Wife! Look at the willing assortment of dreams playing Sally Waters around town. Isn’t this borough a bower of beauty–a flowery thicket where the prettiest kind in all the world grow under glass or outdoors? And what do you do? You used to pretend to prowl about inspecting the yearly crop of posies, growling, cynical, dissatisfied; but you’ve even given that up. Now you only point your nose skyward and squall for a mate, and yowl mournfully that you never have seen your ideal. I know you.”

“I never have seen my ideal,” retorted Gatewood sulkily, “but I know she exists–somewhere between heaven and Hoboken.”