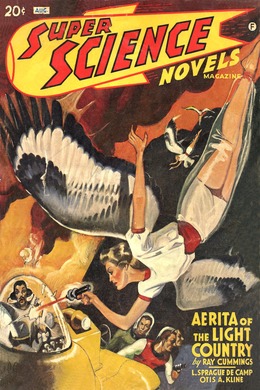 Aerita of the light country

Years have passed, and the doings of Tama, Princess of Mercury, have become the stuff of legend to the women of the Light Country. But now tyranny threatens the winged daughters of the first planet again, and one fearless young woman, Aerita, inspired by the stories of Tama, locates Guy Palisse’s legendary spacecar and blasts off for Earth in search of help. There she finds herself a prisoner in a traveling menagerie, taken captive and presented to the public as a strange creature from South America. Then Alan Grant steps into the tawdry sideshow where Aerita is being held. This is Cummings final novel of the winged women of Mercury.

“Admission only one-hundred-thousandth part of a decimar, friends. Think of it–one-tenth of a miserable little gold-dollar to see the wonder Freak Show of the ages. Come up and get your tickets, friends. See the faceless boy from Borneo. See the beautiful girl with wings. Little flying virgin in all her breath-taking beauty. Who is she? Where is she from? What weird language does she speak? Twelve foot spread of feathered wings, my friends. Human girl of glorious beauty. Flying virgin–the world’s greatest mystery … Get in line there–one at a time, please. A tenth part of a gold-dollar, to see the girl with wings–”

The barker’s voice droned on. Young Alan Grant stood among the little crowd which milled here at the entrance of “Wilkins’ Wonder Freak Show of the Ages.” A girl with wings? He smiled to himself as he dropped his arrant-cylinder, ground it out with his heel and shoved toward the ticket booth. A fake, of course, like the “Faceless Boy from Borneo” and the “Living Mummy from the Valley of the Nile.”

And then he was inside a dim smoky room, staring at a small dais which was illumined by a spot of blue tubelight. An announcer appeared.

“And now, Ladies and Gentlemen, I take great pleasure in presenting the world’s greatest mystery. The girl with wings! Watch her closely, friends. Thrill to her breath-taking beauty. Who is she? What weird language does she speak? You will hear her talk–perhaps one of you can tell us where she is from … Now–here she comes!”

The announcer stepped aside. From the semi-darkness soft weird music was welling through the smoky little room. And then from behind a curtain the girl with wings glided forward into the blue sheen of the overhead tubelight. Young Alan Grant sucked in his breath with a gasp. What he saw was a small girl, hardly more than five feet tall. She was dressed in a long, flowing, gauze-like robe of drapery–pale-blue robe which shimmered in the sheen of the tubelight.

A breath-taking beauty? She was all that–a fragile-looking, ethereal little face framed by long silver hair that hung in two thick braids forward over her shoulders. Girl with wings! Two huge blue-feathered wings arched out from behind her shoulders, folded across her back with their feathered tips almost sweeping the ground.

For a moment she stood staring out from the dais at the smoke-filled room with its circle of curious faces gazing up at her. A girl no more than sixteen, or seventeen perhaps. Yet Grant could see that her queerly frail-looking body was rounded almost into the maturity of young womanhood. A face of ethereal, delicate beauty, but of what nationality? Strangely he could not tell.

For that moment she stood gazing at her audience as though in confusion, with a little half-smile trembling on her coral lips. Grant felt his heart pounding. The wings were a fake, of course. But somehow that faint trembling smile seemed pathetic. As though she were frightened?

“Her name is Aerita,” the announcer’s voice was murmuring from the dimness. “First she will dance for us … Now, Aerita–you understand me?”

At his question she turned and nodded. And now to the slow exotic rhythm of the music she was swaying her hips, then gracefully waving her slim, pink-white arms. And still her tremulous smile persisted.

From the dimness of the audience a raucous voice suddenly protested: “Jess! What about her wings?”

A fake of course. Grant’s heart unaccountably was pounding; but he told himself that now he would see where the wings were attached to her shoulders; and if she moved them he would try and see how the thing was worked. Through the standing group of onlookers he had quietly shoved himself forward until now he was at the edge of the dais, within three feet of the girl.

“Her wings?” the announcer responded quickly. “But first, I want you to hear her talk. Who is she? Where is she from? What weird language does she speak? She’s the mystery of the ages, my friends.”

There was a rippling murmur of derision from the audience on what seemed his stalling; but he ignored it. “Now Aerita–you may stop dancing.”

The music died. The girl stood motionless; drooping. Her head was half turned toward the announcer’s voice.

Weird, breathless little voice. It had a queer soft intonation; and she spoke the words so slowly, so measured that they seemed automatic. As though she were a huge mechanical doll. Gruesome. Or was it very clever acting?

“Now, Aerita–tell us something in your own language–anything you like.”