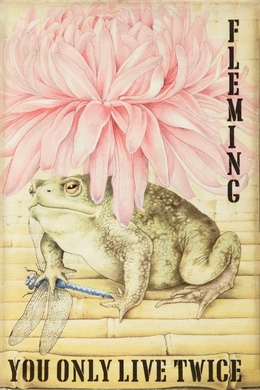 You Only Live Twice

The Castle of Death shelters a poisoned garden, curated by a criminal mastermind and set atop a rocky Japanese island. Bond is shattered by the murder of his wife at the hands of Ernst Stavro Blofeld but M. gives him one last chance. To save his job, James Bond needs to infiltrate and destroy the Castle of Death in exchange for top-secret Japanese intelligence, 007 must learn the skills of ninja warriors and face his ultimate enemy in a battle to the death.

The geisha called “Trembling Leaf,” on her knees beside James Bond, leant forward from the waist and kissed him chastely on the right cheek.

“That’s a cheat,” said Bond severely. “You agreed that if I won it would be a real kiss on the mouth. At the very least,” he added.

“Grey Pearl,” the madame, who had black lacquered teeth, a bizarre affectation, and was so thickly made up that she looked like a character out of a No play, translated. There was much giggling and cries of encouragement. Trembling Leaf covered her face with her pretty hands as if she were being required to perform some ultimate obscenity. But then the fingers divided and the pert brown eyes examined Bond’s mouth, as if taking aim, and her body lanced forward. This time the kiss was full on the lips, and it lingered fractionally. In invitation? In promise? Bond remembered that he had been promised a “pillow geisha.” Technically, this would be a geisha of low caste. She would not be proficient in the traditional arts of her calling–she would not be able to tell humorous stories, sing, paint, or compose verses about her patron. But, unlike her cultured sisters, she might agree to perform more robust services–discreetly, of course, in conditions of the utmost privacy and at a high price. But to the boorish, brutalized tastes of a gaijin, a foreigner, this made more sense than having a tanka of thirty-one syllables, which in any case he couldn’t understand, equate, in exquisite language, his charms with budding chrysanthemums on the slopes of Mount Fuji.

The applause which greeted this unbridled exhibition of lasciviousness died quickly and respectfully. The powerful chunky man in the black yukata, sitting directly across the low red lacquer table from Bond, had taken the Dunhill filter holder from between his golden teeth and had laid it beside his ash-tray. “Bondo-san,” said Tiger Tanaka, head of the Japanese Secret Service, “I will now challenge you to this ridiculous game, and I promise you in advance that you will not win.” The big creased brown face that Bond had come to know so well in the past month split expansively. The wide smile closed the almond eyes to slits–slits that glittered. Bond knew that smile. It wasn’t a smile. It was a mask with a golden hole in it.

Bond laughed. “All right, Tiger. But first, more saké! And not in these ridiculous thimbles. I’ve drunk five flasks of the stuff and its effect is about the same as one double martini. I shall need another double martini if I am to go on demonstrating the superiority of Western instinct over the wiles of the Orient. Is there such a thing as a lowly glass tumbler discarded in some corner behind the cabinets of Ming?”

“Bondo-san. Ming is Chinese. Your knowledge of porcelain is as meagre as your drinking habits are gross. Moreover, it is unwise to underestimate saké. We have a saying, ‘It is the man who drinks the first flask of saké; then the second flask drinks the first; then it is the saké that drinks the man.’” Tiger Tanaka turned to Grey Pearl, and there followed a laughing conversation which Bond interpreted as jokes at the expense of this uncouth Westerner and his monstrous appetites. At a word from the madame, Trembling Leaf bowed low and scurried out of the room. Tiger turned to Bond. “You have gained much face, Bondo-san. It is only the sumo wrestlers who drink saké in these quantities without showing it. She says you are undoubtedly an eight-flask man.” Tiger’s face became sly. “But she also suggests that you will not make much of a companion for Trembling Leaf at the end of the evening.”

“Tell her that I am more interested in her own more mature charms. She certainly possesses talents in the art of love-making which would overcome any temporary lassitude on my part.”

This leaden gallantry got what it deserved. There came a spirited crackle of Japanese from Grey Pearl. Tiger translated. “Bondo-san, this is a woman of some wit. She has made a joke. She says she is already respectably married to one bon-san and there is no room in her futon for another. Bon-san means a priest, a greybeard. Futon, as you know, is bedding. She has made a joke on your name.”