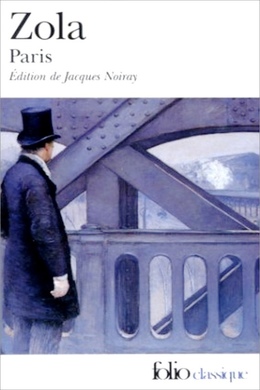 The concluding volume of the Three Cities trilogy is very different from Lourdes and Rome. Whilst recounting the struggles and fate of Abbe Froment and his brother Guillaume, and entering largely into the problem of Capital and Labour, which problem has done so much to turn the masses away from Christianity, it contains many an interesting and valuable picture of the Parisian world at the close of the nineteenth century. It is no guide-book to Paris; but it paints the city’s social life, its rich and poor, its scandals and crimes, its work and its pleasures.

That morning, one towards the end of January, Abbe Pierre Froment, who had a mass to say at the Sacred Heart at Montmartre, was on the height, in front of the basilica, already at eight o’clock. And before going in he gazed for a moment upon the immensity of Paris spread out below him.

After two months of bitter cold, ice and snow, the city was steeped in a mournful, quivering thaw. From the far-spreading, leaden-hued heavens a thick mist fell like a mourning shroud. All the eastern portion of the city, the abodes of misery and toil, seemed submerged beneath ruddy steam, amid which the panting of workshops and factories could be divined; while westwards, towards the districts of wealth and enjoyment, the fog broke and lightened, becoming but a fine and motionless veil of vapour. The curved line of the horizon could scarcely be divined, the expanse of houses, which nothing bounded, appeared like a chaos of stone, studded with stagnant pools, which filled the hollows with pale steam; whilst against them the summits of the edifices, the housetops of the loftier streets, showed black like soot. It was a Paris of mystery, shrouded by clouds, buried as it were beneath the ashes of some disaster, already half-sunken in the suffering and the shame of that which its immensity concealed.

Thin and sombre in his flimsy cassock, Pierre was looking on when Abbe Rose, who seemed to have sheltered himself behind a pillar of the porch on purpose to watch for him, came forward: “Ah! it’s you at last, my dear child,” said he, “I have something to ask you.”

He seemed embarrassed and anxious, and glanced round distrustfully to make sure that nobody was near. Then, as if the solitude thereabouts did not suffice to reassure him, he led Pierre some distance away, through the icy, biting wind, which he himself did not seem to feel. “This is the matter,” he resumed, “I have been told that a poor fellow, a former house-painter, an old man of seventy, who naturally can work no more, is dying of hunger in a hovel in the Rue des Saules. So, my dear child, I thought of you. I thought you would consent to take him these three francs from me, so that he may at least have some bread to eat for a few days.”

“But why don’t you take him your alms yourself?”

At this Abbe Rose again grew anxious, and cast vague, frightened glances about him. “Oh, no, oh, no!” he said, “I can no longer do that after all the worries that have befallen me. You know that I am watched, and should get another scolding if I were caught giving alms like this, scarcely knowing to whom I give them. It is true that I had to sell something to get these three francs. But, my dear child, render me this service, I pray you.”

Pierre, with heart oppressed, stood contemplating the old priest, whose locks were quite white, whose full lips spoke of infinite kindliness, and whose eyes shone clear and childlike in his round and smiling face. And he bitterly recalled the story of that lover of the poor, the semi-disgrace into which he had fallen through the sublime candour of his charitable goodness. His little ground-floor of the Rue de Charonne, which he had turned into a refuge where he offered shelter to all the wretchedness of the streets, had ended by giving cause for scandal. His naivete and innocence had been abused; and abominable things had gone on under his roof without his knowledge. Vice had turned the asylum into a meeting-place; and at last, one night, the police had descended upon it to arrest a young girl accused of infanticide. Greatly concerned by this scandal, the diocesan authorities had forced Abbe Rose to close his shelter, and had removed him from the church of Ste. Marguerite to that of St. Pierre of Montmartre, where he now again acted as curate. Truth to tell, it was not a disgrace but a removal to another spot. However, he had been scolded and was watched, as he said; and he was much ashamed of it, and very unhappy at being only able to give alms by stealth, much like some harebrained prodigal who blushes for his faults.

Pierre took the three francs. “I promise to execute your commission, my friend, oh! with all my heart,” he said.

“You will go after your mass, won’t you? His name is Laveuve, he lives in the Rue des Saules in a house with a courtyard, just before reaching the Rue Marcadet. You are sure to find it. And if you want to be very kind you will tell me of your visit this evening at five o’clock, at the Madeleine, where I am going to hear Monseigneur Martha’s address. He has been so good to me! Won’t you also come to hear him?”