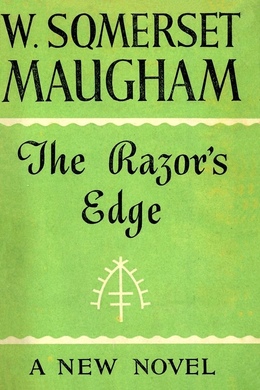 Larry Darrell is a young American in search of the absolute. The progress of this spiritual odyssey involves him with some of Maugham’s most brillant characters - his fiancee Isabel, whose choice between love and wealth have lifelong repercussions, and Elliot Templeton, her uncle, a classic expatriate American snob. The most ambitious of Maugham’s novels, this is also one in which Maugham himself plays a considerable part as he wanders in and out of the story, to observe his characters struggling with their fates.

I have never begun a novel with more misgiving. If I call it a novel it is only because I don’t know what else to call it. I have little story to tell and I end neither with a death nor a marriage. Death ends all things and so is the comprehensive conclusion of a story, but marriage finishes it very properly too and the sophisticated are ill-advised to sneer at what is by convention termed a happy ending. It is a sound instinct of the common people which persuades them that with this all that needs to be said is said. When male and female, after whatever vicissitudes you like, are at last brought together they have fulfilled their biological function and interest passes to the generation that is to come. But I leave my reader in the air. This book consists of my recollections of a man with whom I was thrown into close contact only at long intervals, and I have little knowledge of what happened to him in between. I suppose that by the exercise of invention I could fill the gaps plausibly enough and so make my narrative more coherent; but I have no wish to do that. I only want to set down what I know of my own knowledge.

Many years ago I wrote a novel called The Moon and Sixpence. In that I took a famous painter, Paul Gauguin, and, using the novelist’s privilege, devised a number of incidents to illustrate the character I had created on the suggestions afforded me by the scanty facts I knew about the French artist. In the present book I have attempted to do nothing of the kind. I have invented nothing. To save embarrassment to people still living I have given to the persons who play a part in this story names of my own contriving, and I have in other ways taken pains to make sure that no one should recognize them. The man I am writing about is not famous. It may be that he never will be. It may be that when his life at last comes to an end he will leave no more trace of his sojourn on earth than a stone thrown into a river leaves on the surface of the water. Then my book, if it is read at all, will be read only for what intrinsic interest it may possess. But it may be that the way of life that he has chosen for himself and the peculiar strength and sweetness of his character may have an ever-growing influence over his fellow men so that, long after his death perhaps, it may be realized that there lived in this age a very remarkable creature. Then it will be quite clear of whom I write in this book and those who want to know at least a little about his early life may find in it something to their purpose. I think my book, within its acknowledged limitations, will be a useful source of information to my friend’s biographers.

I do not pretend that the conversations I have recorded can be regarded as verbatim reports. I never kept notes of what was said on this or the other occasion, but I have a good memory for what concerns me, and though I have put these conversations in my own words they faithfully represent, I believe, what was said. I remarked a little while back that I have invented nothing; I want now to modify that statement. I have taken the liberty that historians have taken from the time of Herodotus to put into the mouths of the persons of my narrative speeches that I did not myself hear and could not possibly have heard. I have done this for the same reasons as the historians have, to give liveliness and verisimilitude to scenes that would have been ineffective if they had been merely recounted. I want to be read and I think I am justified in doing what I can to make my book readable. The intelligent reader will easily see for himself where I have used this artifice, and he is at perfect liberty to reject it.