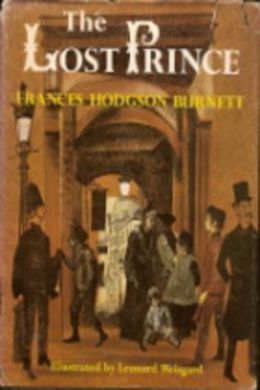 Twelve-year-old Marco and his friend, the Rat, play a vital and dangerous part in restoring the lost prince to his throne in war-torn Samavia.

There are many dreary and dingy rows of ugly houses in certain parts of London, but there certainly could not be any row more ugly or dingier than Philibert Place. There were stories that it had once been more attractive, but that had been so long ago that no one remembered the time. It stood back in its gloomy, narrow strips of uncared–for, smoky gardens, whose broken iron railings were supposed to protect it from the surging traffic of a road which was always roaring with the rattle of busses, cabs, drays, and vans, and the passing of people who were shabbily dressed and looked as if they were either going to hard work or coming from it, or hurrying to see if they could find some of it to do to keep themselves from going hungry. The brick fronts of the houses were blackened with smoke, their windows were nearly all dirty and hung with dingy curtains, or had no curtains at all; the strips of ground, which had once been intended to grow flowers in, had been trodden down into bare earth in which even weeds had forgotten to grow. One of them was used as a stone–cutter’s yard, and cheap monuments, crosses, and slates were set out for sale, bearing inscriptions beginning with “Sacred to the Memory of.” Another had piles of old lumber in it, another exhibited second–hand furniture, chairs with unsteady legs, sofas with horsehair stuffing bulging out of holes in their covering, mirrors with blotches or cracks in them. The insides of the houses were as gloomy as the outside. They were all exactly alike. In each a dark entrance passage led to narrow stairs going up to bedrooms, and to narrow steps going down to a basement kitchen. The back bedroom looked out on small, sooty, flagged yards, where thin cats quarreled, or sat on the coping of the brick walls hoping that sometime they might feel the sun; the front rooms looked over the noisy road, and through their windows came the roar and rattle of it. It was shabby and cheerless on the brightest days, and on foggy or rainy ones it was the most forlorn place in London.

At least that was what one boy thought as he stood near the iron railings watching the passers–by on the morning on which this story begins, which was also the morning after he had been brought by his father to live as a lodger in the back sitting–room of the house No. 7.

He was a boy about twelve years old, his name was Marco Loristan, and he was the kind of boy people look at a second time when they have looked at him once. In the first place, he was a very big boy—tall for his years, and with a particularly strong frame. His shoulders were broad and his arms and legs were long and powerful. He was quite used to hearing people say, as they glanced at him, “What a fine, big lad!” And then they always looked again at his face. It was not an English face or an American one, and was very dark in coloring. His features were strong, his black hair grew on his head like a mat, his eyes were large and deep set, and looked out between thick, straight, black lashes. He was as un–English a boy as one could imagine, and an observing person would have been struck at once by a sort of silent look expressed by his whole face, a look which suggested that he was not a boy who talked much.