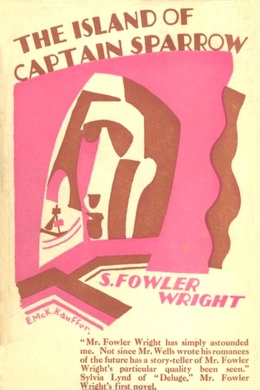 The Island of Captain Sparrow

Stranded on an unknown island in the Pacific, Charlton Foyle must fight goat-like hominids, giant, semi-intelligent birds, degenerate pirate settlers, and the remnants of an ancient race of men with powers to foretell the future, in order to save the life and love of a beautiful French girl.

The wind had fallen, but the sky was still black with low and hurrying cloud, and the sea rolled heavily.

Charlton Foyle sat in the stern of the boat, and steered with an oar. He was striving to keep her head before the wind, and gazing anxiously at the land, toward which wind and tide were united to take him.

He saw that the cliff-wall rose straight and high. There was no sign of nearer rocks or shallows. It appeared that the cliff rose abruptly from a deep water. What hope could it give?

He could not handle the boat. There was a mast, but it was not stepped, nor had he strength and skill to set it up, or to control its canvas. There were oars, but they were too heavy, and the boat too large for a single man to manage more than one.

Till the storm came in the night he had let the boat drift as it would. He had water; he had food. He had not known where he was, nor in which direction land might be nearest. His only hope was to be picked up by a passing ship.

For many days the sun shone; and the seas were kind. The indolent, laughing waters had rocked him gently, and in their arms he had regained something of the health which he had sought vainly over half the world. He had begun to care for life, when life seemed most likely to elude him. He was aware that he watched the horizons for lift of sail, or trail of smoke, with a keener vigilance than he had done in the weariness of the first days. But it was still with a mind too indifferent to the future for anxiety to disturb it, unless it were aroused by a danger which should be acute and imminent.

He had leaned lazily over the tossing side of the boat, watching strange life in deep water, or gazed at a sky of white-and-blue, or brilliant with tropic stars.

Once a flock of birds passed, low and swift, over the waves. He did not know their kind. They flew straight and fast, as having a clear goal and a common purpose. Should he make some effort to direct the boat in the same way? Even could he do it, he had doubted its wisdom. He knew nothing of how far such birds may travel. They might be on their way to a near land, or they might be leaving the near land behind them. They passed quickly, and the great loneliness of sky and water was again around him.

Once the wide expanse of solitary sky was specked by a great bird that grew in size as it came more nearly overhead. He realized that it was not merely flying over, but was descending toward him. It was gray in color, larger than a swan, and with broad wings that moved with an occasional powerful stroke. It came low. It circled the boat twice in a narrowing spiral. He saw a long hooked beak, and a dark eye that considered him. He reached for a boat-hook, and was aware that his hand shook as he did so.

Then it came with a rush, close over him. He crouched in the well of the boat, and thrust blindly as it passed.

Because he crouched as he did, the beak missed him. For a second he was under a canopy of feathered wings. The boat-hook caught, and came clear.

He saw the great bird soaring back into the sky. There was a stain of blood on the end of the hook, and some gray feathers floated on the wind, and settled down on the water.

When the wind had risen, he had got out the oar, and striven to keep the boat’s head so that she should not be swamped by the waves. He did not know whether his toil had been needless. The boat was large, strongly built, and half-decked. He supposed that the storm had not been a bad one. Certainly not as bad as some he had witnessed from a liner’s deck. But the waves had seemed large–there was a difference in the point of view.

Anyway, the wind had fallen again. The black menace of the night, with its heaving waters that came out of the darkness, was over, and he was safe, though wearied–and now the sea was carrying him swiftly toward a peril which he had no means of avoiding, or any hope to overcome. Every moment the cliff-wall showed nearer and higher, as the tide swept the boat forward.

At the rate at which it was moving, it obeyed the steering-oar very readily. He could deflect its course, but he doubted whether this would avail him. It might enable him to delay the final impact, or to strike the land somewhat further north than would otherwise be the case, but it seemed that, soon or late, he must be dashed against a cliff-wall that showed neither beach nor break so far as his eyes, could follow it.

Still, the impulse is instinctive to delay a danger which we can see no means of defeating. The swimmer will remain afloat while his strength lasts, though he may have no hope of rescue. The embarrassed tradesman will strive to renew a bill, though, as he well knows, the later date will give no better prospect of solvency. He leaned on the oar till the boat lay almost broadside to an advancing wave. It rolled in the trough, and some water slopped over the gunwale.