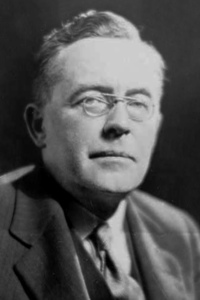 Sydney Fowler Wright was a British editor, poet, science fiction author, writer of screenplays, mystery fiction and works in other genres, as well as being an accountant and a conservative political activist.

Wright began writing science fiction in the 1920s. The book Science-Fiction: The Early Years describes Wright as “the major British writer of genre science fiction between Wells and the moderns”. In 1934, Wright visited Germany to write a series of newspaper articles. Alarmed at what he saw, he wrote three novels about a future war in Europe: Prelude in Prague: The War of 1938, Four Days’ War, and Mediggo’s Ridge.

A great cataclysm shakes the world, and much of Great Britain sinks beneath the ocean during a terrifying windstorm that has already flattened most of m...read more »

A classic novel of time travel into the future. Mankind is extinct and two other intelligent races fight for control of Earth. In this far-future Earth ...read more »

When George is transported to a far-future Earth, he finds himself caught between two very different species of humanity–the Amphibians, dwellers of the...read more »