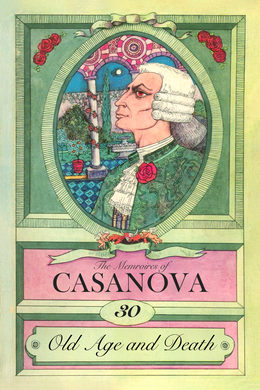 It is unknown what happened to the final volumes of Casanova’s manuscripts; did the author die before the work was complete, were they destroyed by himself or his literary executors, did they fall into bad hands? We do know, however, that Casanova finally succeeded in obtaining his pardon from the authorities of the Republic, and he was able to return to Venice, where he exercised the honourable office of secret agent of the State Inquisitors–in plain language, he became a spy. Eventually he left Venice, finally settling in Paris where he became librarian at Count Wallenstein’s Castle of Dux, near Teplitz, and there he spent the remaining fourteen years of his life.

This final part in the memoirs of Casanova contain an outline of Casanova’s career from the year 1774, when his own manuscripts abruptly end, until his death in 1798.

Thus Casanova ended his Memoirs, concluding his narrative with his sojourn at Trieste, in January 1774, where he had remained, except for a few excursions, since the 15th November 1772. He was forty-nine years of age. Since his unfortunate experiences in England, the loss of his fortune and the failure of his efforts to obtain congenial and remunerative employment in Germany or Russia, he had come to concentrate his efforts on a return to his native city.

Of his faithful friends, the nobles Bragadin, Barbaro and Dandolo, the first had died in 1767, having gone into debt “that I might have enough,” sending Casanova, from his death-bed, a last gift of a thousand crowns. Barbaro who had died also, in 1771, left Casanova a life-income of six sequins a month. The survivor, Dandolo, was poor, but until his death, he also gave Casanova a monthly provision of six sequins. However, Casanova was not without influential friends who might not only obtain a pardon from the State Inquisitors but also assist him to employment; and, in fact, it was through such influence as that wielded by the Avogador Zaguri and the Procurator Morosini, that Casanova received his pardon, and later, a position as “Confidant,” or Secret Agent, to the Inquisitors at Venice.

Casanova re-entered Venice the 14th September 1774 and, presenting himself, on the 18th, to Marc-Antoine Businello, Secretary of the Tribunal of the Inquisitors of State, was advised that mercy had been accorded him by reason of his refutation of the History of the Venetian Government by Amelot de la Houssaie which he had written during his forty-two day imprisonment at Barcelona in 1768. The three Inquisitors, Francesco Grimani, Francesco Sagredo and Paolo Bembo, invited him to dinner to hear his story of his escape from The Leads.

In 1772, Bandiera, the Republic’s resident at Ancona, drew this portrait of Casanova:

“One sees everywhere this unhappy rebel against the justice of the August Council, presenting himself boldly, his head carried high, and well equipped. He is received in many houses and announces his intention of going to Trieste and, from there, of returning to Germany. He is a man of forty years or more,” [in reality, forty-seven] “of high stature and excellent appearance, vigorous, of a very brown color, the eye bright, the wig short and chestnut-brown. He is said to be haughty and disdainful; he speaks at length, with spirit and erudition.” [Letter of information to the Very Illustrious Giovanni Zon, Secretary of the August Council of Ten at Venice. 2 October 1772.]

Returning to Venice after an absence of eighteen years, Casanova renewed his acquaintance with many old friends, among whom were:

The Christine of the Memoirs. Charles, who married Christine, the marriage being arranged by Casanova while in Venice in 1747, was of financial assistance to Casanova, who “found him a true friend.” Charles died “a few months before my last departure from Venice,” in 1783.

Mlle. X—- C—- V—-, really Giustina de Wynne, widow of the Count Rosenberg, Austrian Ambassador at Venice. “Fifteen years afterwards, I saw her again and she was a widow, happy enough, apparently, and enjoying a great reputation on account of her rank, wit and social qualities, but our connection was never renewed.”

Callimena, who was kind to him “for love’s sake alone” at Sorrento in 1770.

Marcoline, the girl he took away from his younger brother, the Abby Casanova, at Geneva in 1763.

Father Balbi, the companion of his flight from The Leads.

Doctor Gozzi, his former teacher at Padua, now become Arch-Priest of St. George of the Valley, and his sister Betting. “When I went to pay him a visit … she breathed her last in my arms, in 1776, twenty-four hours after my arrival. I will speak of her death in due time.”

Angela Toselli, his first passion. In 1758 this girl married the advocate Francesco Barnaba Rizzotti, and in the following year she gave birth to a daughter, Maria Rizzotti (later married to a M. Kaiser) who lived at Vienna and whose letters to Casanova were preserved at Dux.

C—- C—-, the young girl whose love affair with Casanova became involved with that of the nun M—- M—- Casanova found her in Venice “a widow and poorly off.”

The dancing girl Binetti, who assisted Casanova in his flight from Stuttgart in 1760, whom he met again in London in 1763, and who was the cause of his duel with Count Branicki at Warsaw in 1766. She danced frequently at Venice between 1769 and 1780.

The good and indulgent Mme. Manzoni, “of whom I shall have to speak very often.”