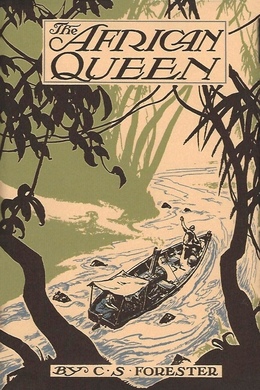 A classic story of adventure and romance, perhaps better known as the novel that inspired the legendary movie starring Katherine Hepburn and Humphrey Bogart. As World War I reaches the heart of the African jungle, Charlie Allnutt and Rose Sayer, a dishevelled trader and an English spinster missionary, find themselves thrown together by circumstance. Fighting time, heat, malaria, and bullets, they make their escape on the The African Queen, an old, dirty, and unreliable steamboat.

Although she herself was ill enough to justify being in bed had she been a person weak-minded enough to give up, Rose Sayer could see that her brother, the Reverend Samuel Sayer, was far more ill. He was very, very weak indeed, and when he knelt to offer up the evening prayer the movement was more like an involuntary collapse than a purposed gesture, and the hands which he raised trembled violently. Rose could see, in the moment before she devoutly closed her eyes, how thin and transparent those hands were, and how the bones of the wrists could be seen with almost the definition of a skeleton’s.

The damp heat of the African forest seemed to be intensified with the coming of the night, which closed in upon them while they prayed. The hands which Rose clasped together were wet as though dipped in water, and she could feel the streams of sweat running down beneath her clothes as she knelt, and forming two little pools at the backs of her bent knees. It was this sensation which helped most to reconcile Rose’s conscience to the absence, in this her approaching middle age, of her corset–a garment without which, so she had always been taught, no woman of the age of fourteen and upwards ever appeared in public. A corset, in fact, was quite an impossibility in Central Africa, although Rose had resolutely put aside, as promptings of the evil one, all the thoughts she had occasionally found forming in her mind of wearing no underclothing at all beneath her white drill frock.

Under the stress of this wet heat that notion even returned at this solemn moment of prayer, but Rose spurned it away and bent her mind once more with anguished intensity to the prayer which Samuel was offering in his feeble voice and with his halting utterance. Samuel prayed for heavenly guidance in the ordering of their lives, and for the forgiveness of their sins. Then as he began to utter his customary petition for the blessing of God upon the mission, his voice faltered more and more. The mission, to which they had given their lives, could hardly be said to exist, now that von Hanneken and his troops had descended upon the place and had swept off the entire village, converts and heathen alike, to be soldiers or bearers in the Army of German Central Africa, which he was assembling. Livestock and poultry, pots and pans and foodstuffs, all had been taken, even the portable chapel, leaving only the mission bungalow standing on the edge of the deserted clearing. So the weakness vanished from Samuel’s voice as he went on to pray that the awful calamity of war which had descended upon the world would soon pass away, that the slaughter and destruction would cease, and that when they had regained their sanity men would turn from war to universal peace. And with the utterance of the last of his petition Samuel’s voice grew stronger yet, as he prayed that the Almighty would bless the arms of England and carry her safely through this the severest of all her trials, and would crown her efforts with victory over the godless militarists who had brought about this disaster. There was a ring of fighting spirit in Samuel’s voice as he said this, and an Old Testament flavour in his speech, as another Samuel had once prayed for victory over the Amalekites.

‘Amen! Amen! Amen!’ sobbed Rose with her head bowed over her clasped hands.

They knelt in silence for a few seconds when the prayer was finished, and then they rose to their feet. There was still just light enough for Rose to see Samuel’s white-clad figure and his white face as he stood there swaying. She made no move to light the lamp. Now that German Central Africa was in arms against England no one could tell when next they would be able to obtain oil, or matches. They were cut off from all communication with the world save through hostile territory.

‘I think, sister,’ said Samuel, faintly, ‘that I shall retire now.’

Rose did not help him to undress–they were brother and sister and strictly brought up and it would have been impossible to her unless he had been quite incapable of helping himself–but she crept in in the dark after he was in bed to see that his mosquito curtains were properly closed round him.

‘Good night, sister,’ said Samuel. Even in that sweltering heat his teeth were chattering.

She herself went back to her own room and lay on her string bed in a torment of heat, although she wore only her thin nightdress. Outside she could hear the noise of the African night, the howling of the monkeys, the shriek of some beast of prey and the bellow of crocodiles down by the river, with, as an accompaniment to it all–so familiar that she did not notice it–the continuous high-pitched whine of the cloud of mosquitoes outside her curtains.