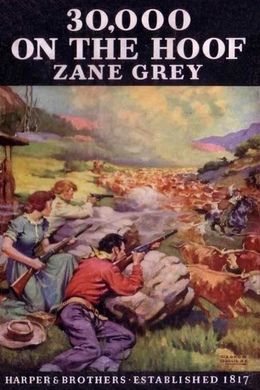 Logan Huett believed he knew the West. Once a scout in the Army, he was familiar with both the hardships and rewards of living the pioneer life, but not even Logan could have foreseen the challenges that lay ahead for him and his young wife Lucinda–raising theit brood of headstrong children. After many struggles to achieve financial security in the wilderness, and surviving the tragedy dealt them by the advent of World War I, they overcome all obstacles set in their path.

General Crook and his regiment of the Western Division of the U.S. Army were cutting a road through the timber on the rim of the Mogollon Mesa above the Tonto Basin. They had as captives a number of Apache Indians, braves, squaws, and children, whom they were taking to be placed under guard on the reservation.

At sunset they made camp at the head of one of the canyons running away from the rim. It was a park-like oval, a little way down from the edge, rich with silver grass and watered by a crystal brook that wound under the giant pines. The noisy advent of the soldiers and their horses and pack-mules disturbed a troop of deer that trotted down the canyon to stop and look back, long ears erect.

Crook’s campaign was about over and the soldiers were jubilant. They joked with the sombre-eyed Apaches, who sat huddled in a group under guard. Packs and saddles plopped to the grass, the ring of axes echoed through the forest, blue smoke curled up into sunset-flushed pines.

The general, never a stickler for customs of the service, sat with his captain and a sergeant, resting after the hard day, and waiting for supper.

“Wonder how old Geronimo is going to take this,” mused Crook.

“We haven’t heard the last of thet redskin,” replied Willis, emphatically. “He’ll break out sooner or later, and then there’ll be hell to pay.”

“I’m glad we didn’t have to kill any of these Apaches.”

“We were lucky, General. I’ll bet McKinney will burn powder before he stops thet Matazel an’ his braves. Bad youngsters.”

“I’ve seen him. Strappin’ young buck. Only Indian I ever saw with grey eyes. He’s said to be one of Geronimo’s sons.”

“Wal, McKinney won’t stand any monkey business from thet outfit,” added Willis. “He’s collared them by this time. Huett knows the country. He’ll track them to some hole in the woods.”

“Good scout, Logan Huett, for so young a man. He has been invaluable in this campaign. I shall recommend him to my successor.”

“Huett is through with army scout service after this campaign. He’ll be missed if old Geronimo breaks out an’ goes on the warpath. Fine woodsman. Best rifle shot I ever saw.”

“What is Huett going to do?”

“Told me he wanted to go home to Missouri for a while. He’s got a girl, I reckon. But he’s hipped on the West an’ will soon be back.”

“He surely will,” added the other officer. “Logan Huett was cut out for a pioneer.”

“The West needs such men more than the Army…. Hello, I hear shouts from above.”

“Sure enough. I see horses an’ army blue through the trees,” added the sergeant.

Presently a squad of soldiers rode down into the glade. They had three mounted Indians with them and another on foot, a tall lithe brave, straight as an arrow, whose bearing was proud. These captives were herded with the others. Sergeant McKinney reported to General Crook that he had secured Matazel and three of his companions. The others got away on foot.

“Any shooting?” queried the general.

“Yes, sir. We couldn’t surprise them an’ they showed fight. We have two men wounded, not serious.”

“I hope you didn’t kill any Indians.”

“We didn’t, to our knowledge.”

The scout approached. He was a young man about twenty-three years old, dark of face. In fact he bore somewhat of a resemblance to Matazel, and he was so stalwart and powerfully built that he did not look tall.

“General, we made sure of getting Matazel alive,” replied the scout, “otherwise none of them would have escaped…. I guessed where Matazel’s bunch was headed for. We cut in behind them, chased them into a box canyon, where we cornered them. They had but little ammunition, or we’d had a different story to tell.”

“Don’t dodge the main point, as McKinney did. Were there any Indians killed?”

“We couldn’t find any dead ones.”

“Willis, fetch this Apache to me.”

In a few moments Matazel stood before the general, his arms crossed over his ragged buckskin shirt, his sombre eyes steady and inscrutable.

“General, he can understand you an’ speak a little English,” spoke up the sergeant who knew Matazel.

“Did my soldiers kill any of your people?”

The Apache shook his head.

“But you would have killed us,” said the general, severely.

Matazel made a magnificent gesture that embraced the forest and the surrounding wilderness.

General Crook had no ready answer for that retort.

“You Indians will be taken care of,” he said presently. “It’s better for you to stay peaceably on the reservation with plenty to eat.”