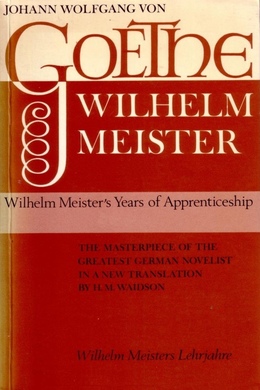 Wilhelm Meister, the son of a merchant, has been seduced by the chimerical world of the theater and embarks on the ambitious quest to become a great theatrical performer and dramatist. The Apprenticeship was a landmark in European literature, as not only one of the key works of Weimar Classicism, and the prototype for the Bildungs­roman genre, but also for being a timeless tale of self-discovery and a fascinating portrayal of theatre in the late 18th-century.

The play was late in breaking up: old Barbara went more than once to the window, and listened for the sound of carriages. She was waiting for Mariana, her pretty mistress, who had that night, in the afterpiece, been acting the part of a young officer, to the no small delight of the public. Barbara’s impatience was greater than it used to be, when she had nothing but a frugal supper to present: on this occasion Mariana was to be surprised with a packet, which Norberg, a young and wealthy merchant, had sent by the post, to show that in absence he still thought of his love.

As an old servant, as confidant, counsellor, manager, and housekeeper, Barbara assumed the privilege of opening seals; and this evening she had the less been able to restrain her curiosity, as the favor of the open-handed gallant was more a matter of anxiety with herself than with her mistress. On breaking up the packet, she had found, with unfeigned satisfaction, that it held a piece of fine muslin and some ribbons of the newest fashion, for Mariana; with a quantity of calico, two or three neckerchiefs, and a moderate rouleau of money, for herself. Her esteem for the absent Norberg was of course unbounded: she meditated only how she might best present him to the mind of Mariana, best bring to her recollection what she owed him, and what he had a right to expect from her fidelity and thankfulness.

The muslin, with the ribbons half unrolled, to set it off by their colors, lay like a Christmas present on the small table; the position of the lights increased the glitter of the gilt; all was in order, when the old woman heard Mariana’s step on the stairs, and hastened to meet her. But what was her disappointment, when the little female officer, without deigning to regard her caresses, rushed past her with unusual speed and agitation, threw her hat and sword upon the table, and walked hastily up and down, bestowing not a look on the lights, or any portion of the apparatus.

“What ails thee, my darling?” exclaimed the astonished Barbara. “For Heaven’s sake, what is the matter? Look here, my pretty child! See what a present! And who could have sent it but thy kindest of friends? Norberg has given thee the muslin to make a night-gown of; he will soon be here himself; he seems to be fonder and more generous than ever.”

Barbara went to the table, that she might exhibit the memorials with which Norberg had likewise honored her, when Mariana, turning away from the presents, exclaimed with vehemence, “Off! off! Not a word of all this to-night. I have yielded to thee; thou hast willed it; be it so! When Norberg comes, I am his, am thine, am any one’s; make of me what thou pleasest; but till then I will be my own; and, if thou hadst a thousand tongues, thou shouldst never talk me from my purpose. All, all that is my own will I give up to him who loves me, whom I love. No sour faces! I will abandon myself to this affection, as if it were to last forever.”

The old damsel had abundance of objections and serious considerations to allege: in the progress of the dialogue, she was growing bitter and keen, when Mariana sprang at her, and seized her by the breast. The old damsel laughed aloud. “I must have a care,” she cried, “that you don’t get into pantaloons again, if I mean to be sure of my life. Come, doff you! The girl will beg my pardon for the foolish things the boy is doing to me. Off with the frock. Off with them all. The dress beseems you not; it is dangerous for you, I observe; the epaulets make you too bold.”

Thus speaking, she laid hands upon her mistress: Mariana pushed her off, exclaiming, “Not so fast! I expect a visit to-night.”

“Visit!” rejoined Barbara: “you surely do not look for Meister, the young, soft-hearted, callow merchant’s son?”

“Just for him,” replied Mariana.

“Generosity appears to be growing your ruling passion,” said the old woman with a grin: “you connect yourself with minors and moneyless people, as if they were the chosen of the earth. Doubtless it is charming to be worshipped as a benefactress.”

“Jeer as thou pleasest. I love him! I love him! With what rapture do I now, for the first time, speak the word! This is the passion I have mimicked so often, when I knew not what it meant. Yes! I will throw myself about his neck: I will clasp him as if I could hold him forever. I will show him all my love, will enjoy all his in its whole extent.”

“Moderate yourself,” said the old dame coolly, “moderate yourself. A single word will interrupt your rapture: Norberg is coming! Coming in a fortnight! Here is the letter that arrived with the packet.”

“And, though the morrow were to rob me of my friend, I would conceal it from myself and him. A fortnight! An age! Within a fortnight, what may not happen, what may not alter?”