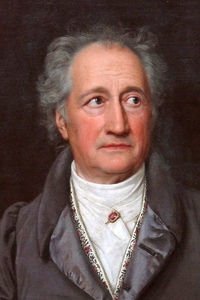 Goethe was a German writer and statesman whose body of work includes epic and lyric poetry; prose and verse dramas; memoirs; an autobiography; literary and aesthetic criticism; treatises on botany, anatomy, and colour; and four novels. A literary celebrity by the age of 25, Goethe was ennobled by the Duke of Saxe-Weimar, Karl August in 1782 after first taking up residence there in November 1775 following the success of his first novel, The Sorrows of Young Werther. He was an early participant in the Sturm und Drang literary movement.

After returning from a tour of Italy in 1788, his first major scientific work, the Metamorphosis of Plants, was published. In 1791 he was made managing director of the theatre at Weimar, and in 1794 he began a friendship with the dramatist, historian, and philosopher Friedrich Schiller, whose plays he premiered until Schiller’s death in 1805. During this period Goethe published his second novel, Wilhelm Meister’s Apprenticeship, the verse epic Hermann and Dorothea, and, in 1808, the first part of his most celebrated drama, Faust. His conversations and various common undertakings throughout the 1790s with Schiller, Johann Gottlieb Fichte, Johann Gottfried Herder, Alexander von Humboldt, Wilhelm von Humboldt, and August and Friedrich Schlegel have, in later years, been collectively termed Weimar Classicism.

A play written in 1787 and originally with music composed by Beethoven. Egmont is a Flemish warrior whose nemesis is the Duke of Alba. Heeventully ends ...read more »

Based on the fable of the man who traded his soul for superhuman powers and knowledge, it became the life’s work of Germany’s greatest poet, Goethe. Beg...read more »

There are few modern poems of any country so perfect in their kind as the Hermann and Dorothea of Goethe. In clearness of characterization, in unity of ...read more »

In King Thaos’s kingdom, Iphigenia is the priestess of Artemis who takes the lives of strangers in sacrifice for the gods. Until the day two special str...read more »

Geothe’s fourteen hundred Maxims and Reflections reveal some of his deepest thought on art, ethics, literature and natural science, but also his immedia...read more »

Visiting an idyllic German village, Werther, a sensitive and romantic young man, meets and falls in love with sweet-natured Lotte. Although he realizes ...read more »

Wilhelm Meister, the son of a merchant, has been seduced by the chimerical world of the theater and embarks on the ambitious quest to become a great the...read more »