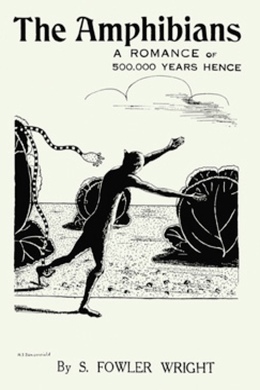 A classic novel of time travel into the future. Mankind is extinct and two other intelligent races fight for control of Earth. In this far-future Earth where mankind is extinct, new intelligent species have thrived. George encounters the Amphibians, the troglodytic Dwellers Underground, and the giant Dwellers, who are engaged in their own struggle for existence.

“Applied science,” said the Professor, “is always incredible to the vulgar mind.”

“You know, George, they really did go–disappeared absolutely–and there’s only one door to the room, and we sat round it. There’s no kid about that,” young Danby added–perhaps recognizing that his father lacked somewhat in the amenities of social intercourse.

“If I go at all, I shall take an axe,” I remarked irrelevantly.

Bryant leant forward, and knocked the ashes out of his pipe.

“Templeton went like a Pirate Chief,” he said, smiling slightly.

“Look here, Bryant,” I said, “tell me what really happened, and I’ll do my best to believe it.”

He hesitated a moment, and then answered slowly, “It’s true enough, what they’ve told you, as far as we can tell it. As to theories of time and space, I know no more than you do. I used to think they were obvious. I’ve heard the Professor talk two nights a week for three years, and I’ve realized that it isn’t all quite as simple as it seemed, though I don’t get much further. But the next room’s a fact. We lay things down on the central slab, and the room goes dark, and we go back in two minutes, and it gets light again, and they’re still there. And the Professor says he’s projected them 500,000 years ahead in the interval, and they don’t look worse for the journey.”

“And it must be true, because they don’t deny it,” I said flippantly. “It sounds rather a dull game, but not very difficult.”

“Yes, I know how it sounds,” he answered, “and we thought just the same; but it did seem to prove one thing–that it did no harm to the objects of the experiment.

“If they went anywhere, at least they came back safely. So at last we tried it with Harry Brett–and he didn’t. We left him there, and we went back, and the room was empty. It’s just a bare circular room, metal-walled, with one exit. You can see for yourself.

“The next day Harry’s wife came and kicked up a row, and we got frightened, and told Templeton, and he said he didn’t believe a word of it, but he was going to find out, so we tried it on him too.”

“He disappeared the same way?”

“No, he didn’t. He came out all right, and he said, ‘It’s true enough, but I reckon you’ve settled Brett. But what’s the use of half-an-hour? I’m going back now. Give me a year, and I may find him.’

“The Professor told him he couldn’t repeat the experiment twice the same night, but he could come back the next, and so he did–and that’s the end of it so far.”

“But if he were to be gone for a year, and he went last Tuesday?”

“He wasn’t to be gone for a year; he was to be there for a year, and be back in two minutes. That’s simple. The Professor’ll tell you.”

“But–if the Professor will excuse the remark–it wouldn’t be any good if he did. I’ve read The Time Machine, and I know that space is curved, thanks to Einstein’s enterprising investigation. I quite understand that, if I got at the right distance from the earth (and my eyesight were good enough), I should see our Darwinian ancestor shinning up the tree-trunk for the fatal apple, but I don’t profess to follow these mysteries further. When I had to learn science, I always preferred the demonstrations. Now, if the Professor would project a pullet six months old backward, and it returned a chicken—-“

Young Danby laughed, and I saw Bryant’s eyes twinkle, but the Professor answered me patiently.

“It is obviously impossible to project anything into the past, which is fixed irrevocably.

“Otherwise there would be no finality, and the confusion would be intolerable. It requires no scientific training of intellect to understand that the ordered experience of life would become chaotic if, for instance, upon reading of a long-past murder, I could project myself into the past, and intervene to save the victim.

“In such event the murder would both have occurred, and been prevented: which is absurd.

“But the future is different. It is unformed, or, at least, its facts are in a condition of fluidity. We are all occupied in forming them. If I kill an insect, I do not destroy it only, but its descendants also. I also influence the lives of other insects with which they would have mated, and which will form other alliances. From such alliances other insects will be born which would not have existed. The present consequences of any action, even the most momentous, are trivial, because the present is but a moment. Its future consequences are incalculably greater, because the future is infinite.

“Realizing this, we recognize that our present actions belong to the future almost entirely, and it becomes a less important possibility that we may be able to project ourselves forward into some future period, and influence its circumstances by the physical methods with which we are familiar here.”

I don’t suppose the Professor had finished, but he paused for breath for a second, and I took the chance he offered.