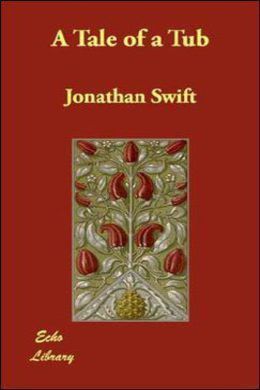 A Tale of a Tub

A Tale of a Tub was the first major work written by Jonathan Swift, composed between 1694 and 1697 and published in 1704. It is probably his most difficult satire, and possibly his most masterly. The Tale is a prose parody which is divided into sections of “digression” and a “tale” of three brothers, each representing one of the main branches of Christianity.The “tale” presents a consistent satire of religious excess, while the digressions are a series of parodies of contemporary writing in literature, politics, theology, Biblical exegesis, and medicine. The overarching parody is of enthusiasm, pride, and credulity. At the time it was written, politics and religion were still linked very closely in England, and the religious and political aspects of the satire can often hardly be separated. The work was published anonymously, and Swift’s cousin Thomas later claimed to have written it. It was enormously popular, but Swift believed it damaged his prospect of advancement in the Church of England.

Whoever has an ambition to be heard in a crowd must press, and squeeze, and thrust, and climb with indefatigable pains, till he has exalted himself to a certain degree of altitude above them. Now, in all assemblies, though you wedge them ever so close, we may observe this peculiar property, that over their heads there is room enough; but how to reach it is the difficult point, it being as hard to get quit of number as of hell.

“But to return, and view the cheerful skies, In this the task and mighty labour lies.”

To this end the philosopher’s way in all ages has been by erecting certain edifices in the air; but whatever practice and reputation these kind of structures have formerly possessed, or may still continue in, not excepting even that of Socrates when he was suspended in a basket to help contemplation, I think, with due submission, they seem to labour under two inconveniences. First, that the foundations being laid too high, they have been often out of sight and ever out of hearing. Secondly, that the materials being very transitory, have suffered much from inclemencies of air, especially in these north–west regions.