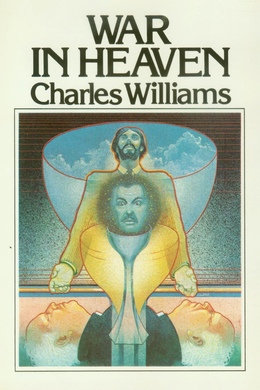 The Holy Grail mysteriously surfaces in an obscure country parish becoming a sacramental object to protect, or a vessel of power to exploit. Williams gives a contemporary setting to the traditional Grail quest, examining the distinction between magic and religion. War in Heaven is an eerily disturbing book, one that graphically portrays a metaphysical journey through the shadowy crevices of the human mind.

The telephone bell was ringing wildly, but without result, since there was no-one in the room but the corpse.

A few moments later there was. Lionel Rackstraw, strolling back from lunch, heard in the corridor the sound of the bell in his room, and, entering at a run, took up the receiver. He remarked, as he did so, the boots and trousered legs sticking out from the large knee-hole table at which he worked, but the telephone had established the first claim on his attention.

He put the receiver down and looked back at the boots. It occurred to him that someone was probably doing something to the telephone; people did, he knew, at various times drift in on him for such purposes. But they usually looked round or said something; and this fellow must have heard him talking. He bent down towards the boots.

“Shall you be long?” he said into the space between the legs and the central top drawer; and then, as there was no answer, he walked away, dropped hat and gloves and book on to their shelf, strolled back to his desk, picked up some papers and read them, put them back, and, peering again into the dark hole, said more impatiently, “Shall you be long?”

No voice replied; not even when, touching the extended foot with his own, he repeated the question. Rather reluctantly he went round to the other side of the table, which was still darker, and, trying to make out the head of the intruder, said almost loudly: “Hallo! hallo! What’s the idea?” Then, as nothing happened, he stood up and went on to himself: “Damn it all, is he dead?” and thought at once that he might be.

That dead bodies did not usually lie round in one of the rooms of a publisher’s offices in London about half-past two in the afternoon was a certainty that formed now an enormous and cynical background to the fantastic possibility. He half looked at the door which he had closed behind him, and then attempted the same sort of interior recovery with which he had often thrown off the knowledge that at any moment during his absence his wife might be involved in some street accident, some skidding bus or swerving lorry. These things happened–a small and unpleasant, if invisible, deity who lived in a corner of his top shelves had reminded him–these things happened, and even now perhaps…. People had been crushed against their own front doors; there had been a doctor in Gower Street. Of course, it was all untrue. But this time, as he moved to touch the protruding feet, he wondered if it were.

The foot he touched apparently conveyed no information to the stranger’s mind, and Lionel gave up the attempt. He went out and crossed the corridor to another office, whose occupant, spread over a table, was marking sentences in newspaper cuttings.

“Mornington,” Lionel said, “there’s a man in my room under the table, and I can’t get him to take any notice. Will you come across? He looks,” he added in a rush of realism, “for all the world as if he was dead.”

“How fortunate!” Mornington said, gathering himself off the table. “If he were alive and had got under your table and wouldn’t take any notice I should be afraid you’d annoyed him somehow. I think that’s rather a pleasant notion,” he went on as they crossed the corridor, “a sort of modern King’s Threshold–get under the table of the man who’s insulted you and simply sulk there. Not, I think, starve–that’s for more romantic ages than ours–but take a case filled with sandwiches and a thermos…. What’s the plural of thermos?…” He stared at the feet, and then, going up to the desk, went down on one knee and put a hand over the disappearing leg. Then he looked up at Lionel.

“Something wrong,” he said sharply. “Go and ask Dalling to come here.” He dropped to both knees and peered under the table.

Lionel ran down the corridor in the other direction, and returned in a few minutes with a short man of about forty-five, whose face showed more curiosity than anxiety. Mornington was already making efforts to get the body from under the table.

“He must be dead,” he said abruptly to the others as they came in. “What an incredible business! Go round the other side, Dalling; the buttons have caught in the table or something; see if you can get them loose.”

“Hadn’t we better leave it for the police?” Dalling asked. “I thought you weren’t supposed to move bodies.”

“How the devil do I know whether it is a body?” Mornington asked. “Not but what you may be right.” He made investigations between the trouser-leg and the boot, and then stood up rather suddenly. “It’s a body right enough,” he said. “Is Persimmons in?”