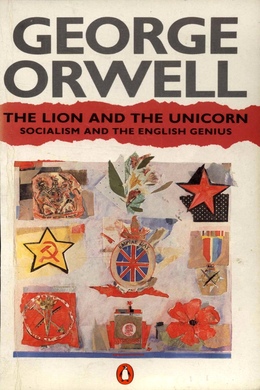 The Lion and the Unicorn

Socialism and the English Genius

Orwell’s moving reflections on the English character and his passionate belief in the need for political change. The Lion and the Unicorn was written in London during the worst period of the blitz. It is vintage Orwell, a dynamic outline of his belief in socialism, patriotism and an English revolution. His fullest political statement, it has been described as ‘one of the most moving and incisive portraits of the English character’ and is as relevant now as it ever has been.

As I write, highly civilized human beings are flying overhead, trying to kill me.

They do not feel any enmity against me as an individual, nor I against them. They are ‘only doing their duty’, as the saying goes. Most of them, I have no doubt, are kind-hearted law-abiding men who would never dream of committing murder in private life. On the other hand, if one of them succeeds in blowing me to pieces with a well-placed bomb, he will never sleep any the worse for it. He is serving his country, which has the power to absolve him from evil.

One cannot see the modern world as it is unless one recognizes the overwhelming strength of patriotism, national loyalty. In certain circumstances it can break down, at certain levels of civilization it does not exist, but as a positive force there is nothing to set beside it. Christianity and international Socialism are as weak as straw in comparison with it. Hitler and Mussolini rose to power in their own countries very largely because they could grasp this fact and their opponents could not.

Also, one must admit that the divisions between nation and nation are founded on real differences of outlook. Till recently it was thought proper to pretend that all human beings are very much alike, but in fact anyone able to use his eyes knows that the average of human behaviour differs enormously from country to country. Things that could happen in one country could not happen in another. Hitler’s June purge, for instance, could not have happened in England. And, as western peoples go, the English are very highly differentiated. There is a sort of back-handed admission of this in the dislike which nearly all foreigners feel for our national way of life. Few Europeans can endure living in England, and even Americans often feel more at home in Europe.

When you come back to England from any foreign country, you have immediately the sensation of breathing a different air. Even in the first few minutes dozens of small things conspire to give you this feeling. The beer is bitterer, the coins are heavier, the grass is greener, the advertisements are more blatant. The crowds in the big towns, with their mild knobby faces, their bad teeth and gentle manners, are different from a European crowd. Then the vastness of England swallows you up, and you lose for a while your feeling that the whole nation has a single identifiable character. Are there really such things as nations? Are we not forty-six million individuals, all different? And the diversity of it, the chaos! The clatter of clogs in the Lancashire mill towns, the to-and-fro of the lorries on the Great North Road, the queues outside the Labour Exchanges, the rattle of pintables in the Soho pubs, the old maids biking to Holy Communion through the mists of the autumn morning—all these are not only fragments, but characteristic fragments, of the English scene. How can one make a pattern out of this muddle?

But talk to foreigners, read foreign books or newspapers, and you are brought back to the same thought. Yes, there is something distinctive and recognizable in English civilization. It is a culture as individual as that of Spain. It is somehow bound up with solid breakfasts and gloomy Sundays, smoky towns and winding roads, green fields and red pillar-boxes. It has a flavour of its own. Moreover it is continuous, it stretches into the future and the past, there is something in it that persists, as in a living creature. What can the England of 1940 have in common with the England of 1840? But then, what have you in common with the child of five whose photograph your mother keeps on the mantelpiece? Nothing, except that you happen to be the same person.

And above all, it is your civilization, it is you. However much you hate it or laugh at it, you will never be happy away from it for any length of time. The suet puddings and the red pillar-boxes have entered into your soul. Good or evil, it is yours, you belong to it, and this side the grave you will never get away from the marks that it has given you.

Meanwhile England, together with the rest of the world, is changing. And like everything else it can change only in certain directions, which up to a point can be foreseen. That is not to say that the future is fixed, merely that certain alternatives are possible and others not. A seed may grow or not grow, but at any rate a turnip seed never grows into a parsnip. It is therefore of the deepest importance to try and determine what England is, before guessing what part England can play in the huge events that are happening.