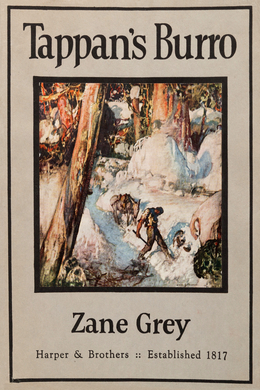 Prospecting was a lonely business for Tappan, but his burro Jenet was good company, and more. She knew the trails and waterholes better than Tappan, from the scorching heat and poison air of Death Valley to the blinding blizzards of Arizona’s mountains. Jenet tracked with him, faithful, his only friend. And he repaid her loyalty with a final, supreme effort of heart, will, and spirit.

An unwanted burro becomes the legendary partner of Tappan–wanderer, hunter, prospector and loner. Together they face everything man and nature can hurl at them, from sly swindlers and claim-jumping murderers to the midnight furnace winds of Death Valley and the killer snows of the high range.

Tappan gazed down upon the newly born little burro with something of pity and consternation. It was not a vigorous offspring of the redoubtable Jennie, champion of all the numberless burros he had driven in his desert-prospecting years. He could not leave it there to die. Surely it was not strong enough to follow its mother. And to kill it was beyond him.

“Poor little devil!” soliloquized Tappan. “I’ll have to hole up in this camp a few days. You can never tell what a burro will do. It might fool us an’ grow strong all of a sudden.”

Whereupon Tappan left Jennie and her tiny, gray lop-eared baby to themselves, and leisurely set about making permanent camp. The water at this oasis was not much to his liking, but it was drinkable, and he felt he must put up with it. For the rest, the oasis was desirable enough as a camping-site.

Desert wanderers like Tappan favored the lonely water holes. This one was up under the bold brow of the Chocolate Mountains, where rocky wall met the desert sand, and a green patch of palo verdes and mesquites proved the presence of water. It had a magnificent view down a many-leagued slope of desert growths, across the dark belt of green and the shining strip of red that marked the Rio Colorado, and on to the upflung Arizona land, range lifting to range until the saw-toothed peaks notched the blue sky.

Locked in the iron fastnesses of these desert mountains was gold. Tappan, if he had any calling, was a prospector. But the lure of gold did not bind him to this wandering life any more than the freedom of it. He had never made a rich strike. About the best he could ever do was to dig enough gold to grubstake himself for another prospecting trip into some remote corner of the American Desert. Tappan knew the arid Southwest from San Diego to the Pecos River and from Picacho on the Colorado to the Tonto Basin. Few prospectors had the strength and endurance of Tappan. He was a giant in build, and at thirty-five had never yet reached the limit of his physical force.

With hammer and pick and magnifying glass Tappan scaled the bare ridges. He was not an expert in testing minerals. He knew he might easily pass by a rich vein of ore. But he did his best, sure at least that no prospector could get more than he out of the pursuit of gold. Tappan was more of a naturalist than a prospector, and more of a dreamer than either. Many were the idle moments that he sat staring down the vast reaches of the valleys, or watching some creature of the wasteland, or marveling at the vivid hues of desert flowers.

Tappan waited two weeks at this oasis for Jennie’s baby burro to grow strong enough to walk. And the very day that Tappan decided to break camp he found signs of gold at the head of a wash above the oasis. Quite by chance, as he was looking for his burros, he struck his pick into a place no different from a thousand others there, and hit into a pocket of gold. He cleaned out the pocket before sunset, the richer for several thousand dollars.

“You brought me luck,” said Tappan, to the little gray burro staggering around its mother. “Your name is Jenet. You’re Tappan’s burro, an’ I reckon he’ll stick to you.”

Jenet belied the promise of her birth. Like a weed in fertile ground she grew. Winter and summer Tappan patrolled the sand beats from one trading-post to another, and his burros traveled with him. Jenet had an especially good training. Her mother had happened to be a remarkably good burro before Tappan had bought her. And Tappan had patience; he found leisure to do things, and he had something of pride in Jenet. Whenever he happened to drop into Ehrenberg or Yuma, or any freighting-station, some prospector always tried to buy Jenet. She grew as large as a medium-sized mule, and a three-hundred-pound pack was no load to discommode her.

Tappan, in common with most lonely wanderers of the desert, talked to his burro. As the years passed this habit grew, until Tappan would talk to Jenet just to hear the sound of his voice. Perhaps that was all which kept him human.

“Jenet, you’re worthy of a happier life,” Tappan would say, as he unpacked her after a long day’s march over the barren land. “You’re a ship of the desert. Here we are, with grub an’ water, a hundred miles from any camp. An’ what but you could have fetched me here? No horse! No mule! No man! Nothin’ but a camel, an’ so I call you ship of the desert. But for you an’ your kind, Jenet, there’d be no prospectors, and few gold mines. Reckon the desert would be still an unknown waste. You’re a great beast of burden, Jenet, an’ there’s no one to sing your praise.”

And of a golden sunrise, when Jenet was packed and ready to face the cool, sweet fragrance of the desert, Tappan was wont to say: