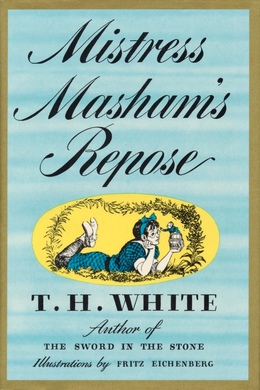 So ten-year-old Maria, orphaned mistress of Malplaquet, discovers the secret of her deteriorating estate: on a deserted island at its far corner, in the temple long ago nicknamed Mistress Masham’s Repose, live an entire community of people — ‘The People’, as they call themselves—all only inches tall. With the help of her only friend—the absurdly erudite Professor—Maria soon learns that this settlement is no less than the kingdom of Lilliput (first seen in Gulliver’s Travels) in exile. Safely hidden for centuries, the Lilliputians are at first endangered by Maria’s well-meaning but clumsy attempts to make their lives easier, but their situation grows truly ominous when they are discovered by Maria’s greedy guardians, who look at The People and see only a bundle of money.

Maria was ten years old. She had dark hair in two pigtails, and brown eyes the color of marmite, but more shiny. She wore spectacles for the time being, though she would not have to wear them always, and her nature was a loving one. She was one of those tough and friendly people who do things first and think about them afterward. When she met cows, however, she did not like to be alone with them, and there were other dangers, such as her governess, from which she would have liked to have had a protector. Her main accomplishment was that she enjoyed music, and played the piano well. Perhaps it was because her ear was good that she detested loud noises, and dreaded the fifth of November. This, however, with the cows, was her only weakness, and she was said to be good at games.

Unfortunately she was an orphan, which made her difficulties more complicated than they were with other people. She lived in an enormous house in the wilds of Northamptonshire, which was about four times longer than Buckingham Palace, but was falling down. It had been built by one of her ducal ancestors who had been a friend of the poet Pope’s, and it was surrounded by Vistas, Obelisks, Pyramids, Columns, Temples, Rotundas, and Palladian Bridges, which had been built in honor of General Wolfe, Admiral Byng, the Princess Amelia, and others of the same kidney. Maria’s parents had made a desperate attempt to keep the grounds in order. They had been killed in an accident, however, and after that there had been no money left, not even enough to live on respectably in a boarding-house, somewhere else. The Rates and so on had used up all the available income, and nobody could be persuaded to buy the place for a school nor for a hospital. Consequently she and her governess had to sleep in two bedrooms which still had a bit of roof over them, the governess using one of the smaller drawing rooms to live in, and they had a cook to look after them, who dwelt in the kitchen. It is literally true that this cook had a bicycle in the basement corridor, which she used to ride along the corridor, when she had to answer the bell.

The house had 365 windows, all broken but six, 52 state bedrooms, and 12 company rooms. It was called Malplaquet.

Maria’s governess was a Miss Brown. She had been appointed by the local vicar, who was Maria’s guardian. Both the Vicar and the governess were so repulsive that it is difficult to write about them fairly.

The Vicar was 5 ft. 7 ins. in height, and looked as if he were fifty years old. His face was red, with hundreds of little veins of a purple color, because he suffered either from blood pressure or from a weak heart or from both. It was difficult to see his eyes, partly because they were of the same general color as the rest of his face, and partly because he wore thick spectacles, behind which they lurked like oysters. His hair was parted in the middle and brushed flat. He had rather pouting bluish lips, and he walked upright and slow, giving a faint humming noise from the back of his nose, like a bee. He had been a housemaster in a public school before he got the job as Maria’s guardian, and his only pleasure then had been in caning the boys–but he had not been able to do so much of this as he would have liked to do, owing to his heart. His name was Mr. Hater. He was a bachelor. It was suspicious that he had a Rolls-Royce, and spent much of his time in London, while Maria had to live in the ruined house on sago and other horrors.