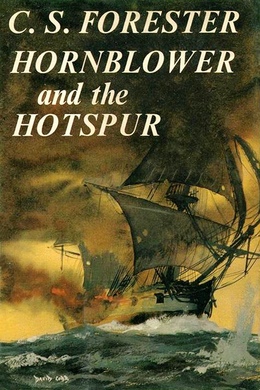 Hornblower and the Hotspur

The Peace of Amiens is breaking down. Napoleon is building ships and amassing an army just across the Channel. Horatio Hornblower, who, at age twenty-seven, has already distinguished himself as one of the most daring and resourceful officers in the Royal Navy-commands the three-masted Hotspur on a dangerous reconnaissance mission that evolves, as war breaks out, into a series of spectacular confrontations. All the while, the introspective young commander struggles to understand his new bride and mother-in-law, his officers and crew, and his own ‘accursed unhappy temperament‘-matters that trouble him more, perhaps, than any of Bonaparte’s cannonballs.

The thought came up in Hornblower’s mind that these were the last few seconds in which he could withdraw from doing something which he knew to be ill-considered. Maria was not the right woman to be his wife, even admitting that he was suitable material for marriage in any case. If he had a grain of sense, he would break off this ceremony even at this last moment, he would announce that he had changed his mind, and he would turn away from the altar and from the parson and from Maria, and he would leave the church a free man.

‘To have and to hold–’ he was still, like an automaton, repeating the parson’s words. And there was Maria beside him, in the white that so little became her. She was melting with happiness. She was consumed with love for him, however misplaced it might be. He could not, he simply could not, deal her a blow so cruel. He was conscious of the trembling of her body beside him. That was not fear, for she had utter and complete trust in him. He could no more bring himself to shatter that trust than he could have refused to command the Hotspur.

‘And thereto I plight thee my troth,’ repeated Hornblower. That settled it, he thought. Those must be the final deciding words that made the ceremony legally binding. He had made a promise and now there was no going back on it. There was a comfort in the odd thought that he had really been committed from a week back, when Maria had come into his arms sobbing out her love for him, and he had been too soft-hearted to laugh at her and too–too weak? too honest?–to take advantage of her with the intention of betraying her. From the moment that he had listened to her, from the moment that he had returned her kisses, gently, all these later results, the bridal dress, this ceremony in the church of St Thomas à Becket–and the vague future of cloying affection–had been inevitable.

Bush was ready with the ring, and Hornblower slipped it over Maria’s finger, and the final words were said.

‘I now pronounce that they are man and wife,’ said the parson, and he went on with the blessing, and then a blank five seconds followed, until Maria broke the silence.

‘The happiest day of my life,’ he said; if a thing had to be done it might as well be done thoroughly, so that in the same spirit he continued. ‘In my life so far.’

It was actually painful to note the unbounded happiness of the smile that answered this gallant speech. Maria put her other hand up to him, and he realised she expected to be kissed, then and there, in front of the altar. It hardly seemed a proper thing to do, in a sacred edifice–in his ignorance he feared lest he should affront the devout–but once more there was no drawing back, and he stooped and kissed the soft lips that she proffered.

‘Your signatures are required in the register,’ prompted the parson, and led the way to the vestry.

They wrote their names.

‘Now I can kiss my son-in-law,’ announced Mrs Mason loudly, and Hornblower found himself clasped by two powerful arms and soundly kissed on the cheek. He supposed it was inevitable that a man should feel a distaste for his mother-in-law.

But here was Bush to disengage him, with outstretched hand and unusual smile, offering felicitations and best wishes.

‘Many thanks,’ said Hornblower, and added, ‘Many thanks for many services.’

Bush was positively embarrassed, and tried to brush away Hornblower’s gratitude with the same gestures as he would have used to brush away flies. He had been a tower of strength in this wedding, just as he had been in the preparation of the Hotspur for sea.

‘I’ll see you again at the breakfast, sir,’ he said, and with that he withdrew from the vestry, leaving behind him an awkward gap.

‘I was counting on Mr Bush’s arm for support down the aisle,’ said Mrs Mason, sharply.

It certainly was not like Bush to leave everyone in the lurch like this; it was in marked contrast with his behaviour during the last few whirlwind days.

‘We can bear each other company, Mrs Mason,’ said the parson’s wife. ‘Mr Clive can follow us.’

‘You are very kind, Mrs Clive,’ said Mrs Mason, although there was nothing in her tone to indicate that she meant what she said. ‘Then the happy pair can start now. Maria, take the captain’s arm.’