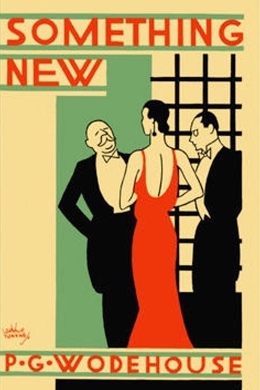 Young neighbours and fellow-writers Ashe Marson and Joan Valentine, newly met and both in need of a change of direction, find themselves drawn down to Blandings, for various reasons attempting to retrieve a scarab belonging to an American millionaire, absent-mindedly purloined by Lord Emsworth. Once within the Castle’s idyllic walls, despite impersonating servants, romance cannot help but blossom; meanwhile, Freddie Threepwood, engaged to the millionaire’s daughter, is worried about some incriminating letters….

The sunshine of a fair Spring morning fell graciously on London town. Out in Piccadilly its heartening warmth seemed to infuse into traffic and pedestrians alike a novel jauntiness, so that bus drivers jested and even the lips of chauffeurs uncurled into not unkindly smiles. Policemen whistled at their posts–clerks, on their way to work; beggars approached the task of trying to persuade perfect strangers to bear the burden of their maintenance with that optimistic vim which makes all the difference. It was one of those happy mornings.

At nine o’clock precisely the door of Number Seven Arundell Street, Leicester Square, opened and a young man stepped out.

Of all the spots in London which may fairly be described as backwaters there is none that answers so completely to the description as Arundell Street, Leicester Square. Passing along the north sidewalk of the square, just where it joins Piccadilly, you hardly notice the bottleneck opening of the tiny cul-de-sac. Day and night the human flood roars past, ignoring it. Arundell Street is less than forty yards in length; and, though there are two hotels in it, they are not fashionable hotels. It is just a backwater.

In shape Arundell Street is exactly like one of those flat stone jars in which Italian wine of the cheaper sort is stored. The narrow neck that leads off Leicester Square opens abruptly into a small court. Hotels occupy two sides of this; the third is at present given up to rooming houses for the impecunious. These are always just going to be pulled down in the name of progress to make room for another hotel, but they never do meet with that fate; and as they stand now so will they in all probability stand for generations to come.

They provide single rooms of moderate size, the bed modestly hidden during the day behind a battered screen. The rooms contain a table, an easy-chair, a hard chair, a bureau, and a round tin bath, which, like the bed, goes into hiding after its useful work is performed. And you may rent one of these rooms, with breakfast thrown in, for five dollars a week.

Ashe Marson had done so. He had rented the second-floor front of Number Seven.

Twenty-six years before this story opens there had been born to Joseph Marson, minister, and Sarah his wife, of Hayling, Massachusetts, in the United States of America, a son. This son, christened Ashe after a wealthy uncle who subsequently double-crossed them by leaving his money to charities, in due course proceeded to Harvard to study for the ministry. So far as can be ascertained from contemporary records, he did not study a great deal for the ministry; but he did succeed in running the mile in four minutes and a half and the half mile at a correspondingly rapid speed, and his researches in the art of long jumping won him the respect of all.

That he should be awarded, at the conclusion of his Harvard career, one of those scholarships at Oxford University instituted by the late Cecil Rhodes for the encouragement of the liberal arts, was a natural sequence of events.

That was how Ashe came to be in England.

The rest of Ashe’s history follows almost automatically. He won his blue for athletics at Oxford, and gladdened thousands by winning the mile and the half mile two years in succession against Cambridge at Queen’s Club. But owing to the pressure of other engagements he unfortunately omitted to do any studying, and when the hour of parting arrived he was peculiarly unfitted for any of the learned professions. Having, however, managed to obtain a sort of degree, enough to enable him to call himself a Bachelor of Arts, and realizing that you can fool some of the people some of the time, he applied for and secured a series of private tutorships.

A private tutor is a sort of blend of poor relation and nursemaid, and few of the stately homes of England are without one. He is supposed to instill learning and deportment into the small son of the house; but what he is really there for is to prevent the latter from being a nuisance to his parents when he is home from school on his vacation.

Having saved a little money at this dreadful trade, Ashe came to London and tried newspaper work. After two years of moderate success he got in touch with the Mammoth Publishing Company.

The Mammoth Publishing Company, which controls several important newspapers, a few weekly journals, and a number of other things, does not disdain the pennies of the office boy and the junior clerk. One of its many profitable ventures is a series of paper-covered tales of crime and adventure. It was here that Ashe found his niche. Those adventures of Gridley Quayle, Investigator, which are so popular with a certain section of the reading public, were his work.