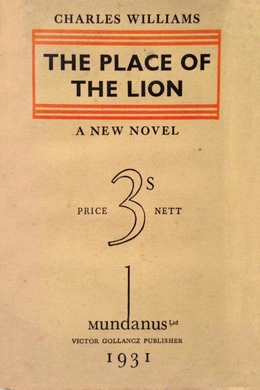 The Place of the Lion

When platonic archetypes begin to invade London and the heavenly world intrudes on our own, a small number of people who know what is happening react in varying ways. Some attempt to control these rabid Ideas while others run and hide. One ignores their existence and another vows to stop their impending rule.

From the top of the bank, behind a sparse hedge of thorn, the lioness stared at the Hertfordshire road. She moved her head from side to side, then suddenly she became rigid as if she had scented prey or enemy; she crouched lower, her body trembling, her tail swishing, but she made no sound.

Almost a mile away Quentin Sabot jumped from the gate on which he had been sitting and looked at his wrist-watch.

‘I don’t see much sign of this bus of yours,’ he said, glancing along the road.

Anthony Durrant looked in the same direction. ‘Shall we wander along and meet it?’

‘Or go on and let it catch us up?’ Quentin suggested. ‘After all, that’s our direction.’

‘The chief use of the material world,’ Anthony said, still sitting on the gate, ‘is that one can, just occasionally, say that with truth. Yes, let’s.’ He got down leisurely and yawned. ‘I feel I could talk better on top of a bus than on my feet just now,’ he went on. ‘How many miles have we done, should you think?’

‘Thereabouts,’ the other nodded, and stretched himself lazily. ‘Well, if we’re going on, let’s,’ and as they began to stroll slowly along, ‘Mightn’t it be a good thing if everyone had to draw a map of his own mind–say, once every five years? With the chief towns marked, and the arterial roads he was constructing from one idea to another, and all the lovely and abandoned by-lanes that he never went down, because the farms they led to were all empty?’

‘And arrows showing the directions he wanted to go?’ Quentin asked idly.

‘They’d be all over the place,’ Anthony sighed. ‘Like that light which I see bobbing about in front of me now.’

‘I see several,’ Quentin broke in. ‘What are they–lanterns?’

‘They look like them–three–five,’ Anthony said. ‘They’re moving about, so it can’t be the road up or anything.’

‘They may be hanging the lanterns on poles,’ Quentin protested.

‘But’, Anthony answered, as they drew nearer to the shifting lanterns, ‘they are not. Mortality, as usual, carries its own star.’

He broke off as a man from the group in front beckoned to them with something like a shout. ‘This is very unusual,’ he added. ‘Have I at last found someone who needs me?’

‘They all seem very excited,’ Quentin said, and had no time for more. There were some dozen men in the group the two had reached, and Quentin and Anthony stared at it in amazement. For all the men were armed–four or five with rifles, two with pitchforks; others who carried the lanterns had heavy sticks. One of the men with rifles spoke sharply. ‘Didn’t you hear the warning that’s been sent out?’

‘We’ve sent a man to all the crossroads this half hour or more,’ the other said. ‘Where have you come from that you didn’t meet him?’

‘Well, for half an hour we’ve been sitting on a gate waiting for a bus,’ Anthony explained, and was surprised to hear two or three of the men break into a short laugh, while another added sardonically, ‘And so you might wait.’ He was about to ask further when the first speaker said sharply, ‘The fact is there’s a lioness loose somewhere round here, and we’re after it.’

‘The devil there is!’ Quentin exclaimed, while Anthony, more polite, said, ‘I see–yes. That does seem a case for warning people. But we’ve been resting down there and I suppose your man made straight for the cross-roads and missed us.’ He waited to hear more.

‘It got away from a damned wild beast show over there,’ the other said, nodding across the darkening fields, ‘close by Smetham. We’re putting a cordon of men and lights round all the part as quickly as we can and warning the people in the houses. Everything on the roads has been turned away–that’s why you missed your bus.’

‘It seems quite a good reason,’ Anthony answered. ‘Was it a large lioness? Or a fierce one?’

‘Fierce be damned,’ said another man, who possibly belonged to the show. ‘It was as tame as a white mouse, only some fool startled it.’

‘I’ll make it a darn sight tamer if I get a shot at it,’ the first man said. ‘Look here, you gentlemen had better get straight ahead as fast as you can. We’re going to meet some others and then beat across the fields to that wood–that’s where it’ll be.’

‘Can’t we help you?’ Anthony asked, looking round him. ‘It seems such a pity to miss the nearest thing to a lion hunt we’re ever likely to find.’

But the other had made up his mind. ‘You’ll be more use at the other end,’ he said. ‘That’s where we want the numbers. About a mile up that way there’s the main road, and the more we’ve got there the better. It isn’t likely to be on any road–not even this one–unless it just dashes across, so you’ll be pretty safe, safer along here than you will be across the fields with us. Unless you’re used to country by night.’