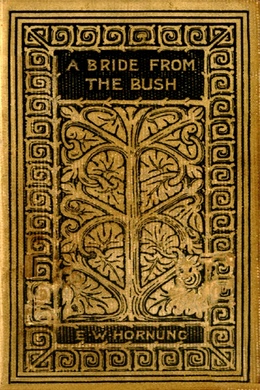 A Bride from the Bush

Today, a family would think nothing of the fact that one of their sons had fallen in love with an Australian woman. In the stodgy nineteenth century, however, the news was taken somewhat differently. Indeed, for the proper British Bligh family in E. W. Hornung’s A Bride From the Bush, a dispatch delivering this information is received in the manner of a bomb detonating at the breakfast table. The author skillfully spins what starts out as a classic fish-out-of-water tale into a beguiling mystery.

There was consternation in the domestic camp of Mr. Justice Bligh on the banks of the Thames. It was a Sunday morning in early summer. Three-fourths of the family sat in ominous silence before the mockery of a well-spread breakfast-table: Sir James and Lady Bligh and their second son, Granville. The eldest son—the missing complement of this family of four—was abroad. For many months back, and, in fact, down to this very minute, it had been pretty confidently believed that the young man was somewhere in the wilds of Australia; no one had quite known where, for the young man, like most vagabond young men, was a terribly meagre corespondent; nor had it ever been clear why any one with leisure and money, and of no very romantic turn, should have left the beaten track of globe-trotters, penetrated to the wilderness, and stayed there—as Alfred Bligh had done. Now, however, all was plain. A letter from Brindisi, just received, explained everything; Alfred’s movements, so long obscure, were at last revealed, and in a lurid light—that, as it were, of the bombshell that had fallen and burst upon the Judge’s breakfast-table. For Alfred was on his way to England with an Australian wife; and this letter from Brindisi, was the first that his people had heard of it, or of her.

“Of course,” said Lady Bligh, in her calm and thoughtful manner, “it was bound to happen sooner or later. It might have happened very much sooner; and, indeed, I often wished that it would; for Alfred must be—what? Thirty?”

“Quite,” said Granville; “I am nearly that myself.”

“Well, then,” said Lady Bligh gently, looking tenderly at the Judge (whose grave eyes rested upon the sunlit lawn outside), “from one point of view—a selfish one—we ought to consider ourselves the most fortunate of parents. And this news should be a matter for rejoicing, as it would be, if—if it were only less sudden, and wild, and—and—”

Her voice trembled; she could not go on.

“And alarming,” added Granville briskly, pulling himself together and taking an egg.

Then the Judge spoke.

“I should like,” he said, “to hear the letter read slowly from beginning to end. Between us, we have not yet given it a fair chance; we have got only the drift of it; we may have overlooked something. Granville, perhaps you will read the letter aloud to your mother and me?”

Granville, who had just laid open his egg with great skill, experienced a moment’s natural annoyance at the interruption. To stop to read a long letter now was, he felt, treating a good appetite shabbily, to say nothing of the egg. But this was not a powerful feeling; he concealed it. He had a far stronger appetite than the mere relish for food; the intellectual one. Granville had one of the nicest intellects at the Junior Bar. His intellectual appetite was so hearty, and even voracious, that it could be gratified at all times and places, and not only by the loaves and fishes of full-bodied wit, but by the crumbs and fishbones of legal humour—such as the reading aloud of indifferent English and ridiculous sentiments in tones suitable to the most chaste and classic prose. This he had done in court with infinite gusto, and he did it now as he would have done it in court.

“‘My dear Mother’” (he began reading, through a single eyeglass that became him rather well),—”‘Before you open this letter you’ll see that I’m on my way home! I am sorry I haven’t written you for so long, and very sorry I didn’t before I sailed. I should think when I last wrote was from Bindarra. But I must come at once to my great news—which Heaven knows how I’m to tell you, and how you’ll take it when I do. Well, I will, in two words—the fact is, I’m married! My wife is the daughter of ‘the boss of Bindarra’—in other words, a ‘squatter’ with a ‘run’ (or territory) as big as a good many English counties.’”

The crisp forensic tones were dropped for an explanatory aside. “He evidently means—father” (Granville nearly said “my lord,” through force of habit), “that his father-in-law is the squatter; not his wife, which is what he says. He writes in such a slipshod style. I should also think he means that the territory in question is equal in size to certain English counties, individually (though this I venture to doubt), and not—what you would infer—to several counties put together. His literary manner was always detestable, poor old chap; and, of course, Australia was hardly likely to improve it.”

The interpolation was not exactly ill-natured; but it was received in silence; and Granville’s tones, as he resumed the reading, were even more studiously unsympathetic than before.