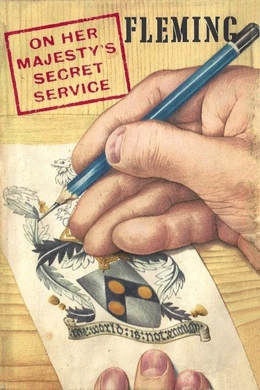 On Her Majesty's Secret Service

A Lancia Spyder with its hood down tore past him, cut in cheekily across his bonnet and pulled away, the sexy boom of its twin exhausts echoing back at him. It was a girl driving, a girl with a shocking pink scarf tied round her hair. And if there was one thing that set James Bond really moving, it was being passed at speed by a pretty girl.

When Bond rescues a beautiful, reckless girl from self-destruction, he finds himself with a lead on one of the most dangerous men in the world—Ernst Stavro Blofeld, the head of SPECTRE. In the snow-bound fastness of his Alpine base, Blofeld is conducting research that could threaten the safety of the world. To thwart the evil genius, Bond must get himself and the vital information he has gathered out of the base and keep away from SPECTRE’s agents.

It was one of those Septembers when it seemed that the summer would never end.

The five-mile promenade of Royale-les-Eaux, backed by trim lawns emblazoned at intervals with tricolour beds of salvia, alyssum and lobelia, was bright with flags and, on the longest beach in the north of France, the gay bathing tents still marched prettily down to the tide-line in big, money-making battalions. Music, one of those lilting accordion waltzes, blared from the loudspeakers around the Olympic-size piscine and, from time to time, echoing above the music, a man’s voice announced over the public address system that Philippe Bertrand, aged seven, was looking for his mother, that Yolande Lefèvre was waiting for her friends below the clock at the entrance, or that a Madame Dufours was demanded on the telephone. From the beach, particularly from the neighbourhood of the three playground enclosures–‘Joie de Vivre’, ‘Helio’ and ‘Azur’–came a twitter of children’s cries that waxed and waned with the thrill of their games and, farther out, on the firm sand left by the now distant sea, the shrill whistle of the physical-fitness instructor marshalled his teenagers through the last course of the day.

It was one of those beautiful, naive seaside panoramas for which the Brittany and Picardy beaches have provided the setting–and inspired their recorders, Boudin, Tissot, Monet–ever since the birth of plages and bains de mer more than a hundred years ago.

To James Bond, sitting in one of the concrete shelters with his face to the setting sun, there was something poignant, ephemeral about it all. It reminded him almost too vividly of childhood–of the velvet feel of the hot powder sand, and the painful grit of wet sand between young toes when the time came for him to put his shoes and socks on, of the precious little pile of sea-shells and interesting wrack on the sill of his bedroom window (‘No, we’ll have to leave that behind, darling. It’ll dirty up your trunk!’), of the small crabs scuttling away from the nervous fingers groping beneath the seaweed in the rock-pools, of the swimming and swimming and swimming through the dancing waves–always in those days, it seemed, lit with sunshine–and then the infuriating, inevitable ‘time to come out’. It was all there, his own childhood, spread out before him to have another look at. What a long time ago they were, those spade-and-bucket days! How far he had come since the freckles and the Cadbury milk-chocolate Flakes and the fizzy lemonade! Impatiently Bond lit a cigarette, pulled his shoulders out of their slouch and slammed the mawkish memories back into their long-closed file. Today he was a grown-up, a man with years of dirty, dangerous memories–a spy. He was not sitting in this concrete hideout to sentimentalize about a pack of scrubby, smelly children on a beach scattered with bottle-tops and lolly-sticks and fringed by a sea thick with sun-oil and putrid with the main drains of Royale. He was here, he had chosen to be here, to spy. To spy on a woman.

The sun was getting lower. Already one could smell the September chill that all day had lain hidden beneath the heat. The cohorts of bathers were in quick retreat, striking their little camps and filtering up the steps and across the promenade into the shelter of the town where the lights were going up in the cafés. The announcer at the swimming-pool harried his customers: ‘Allo! Allo! Fermeture en dix minutes! A dix-huit heures, fermeture de la piscine!’ Silhouetted in the path of the setting sun, the two Bombard rescue-boats with flags bearing a blue cross on a yellow background were speeding northwards for their distant shelter up-river in the Vieux Port. The last of the gay, giraffe-like sand-yachts fled down the distant water-line towards its corral among the sand dunes, and the three agents cyclistes in charge of the car-parks pedalled away through the melting ranks of cars towards the police station in the centre of the town. In a matter of minutes the vast expanse of sand–the tide, still receding, was already a mile out–would be left to the seagulls that would soon be flocking in their hordes to forage for the scraps of food left by the picnickers. Then the orange ball of the sun would hiss down into the sea and the beach would, for a while, be entirely deserted, until, under cover of darkness, the prowling lovers would come to writhe briefly, grittily in the dark corners between the bathing-huts and the sea-wall.