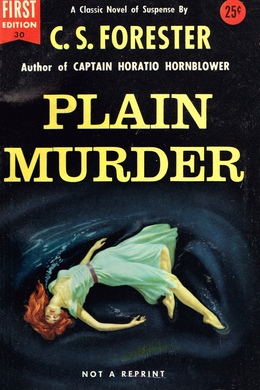 At the Universal Advertising Agency on the Strand, London, a murder is being planned. Three men have been discovered taking bribes and face the grim prospect of the dole queue, unless they can get rid of the person who caught them. Their ringleader, thick-set and vicious Mr Morris, soon discovers that killing is far easier than he thought - and that he even has a talent for it. He might, he feels, be superhuman. But as he will discover, there is no such thing as the perfect crime, and no deed goes unpunished.

Taking us into a 1930s London of grimy back streets, smoky cafes and shabby rooms, Forester’s second crime novel, is a brilliantly atmospheric and gripping portrayal of the dark heart of a killer.

The three young men sat together at a marble-topped table in the teashop. Their cups of coffee stood untasted before them. The saucer under Reddy’s cup was half full of coffee, slopped into it by an irritated waitress who missed the usual familiar smirk which Morris wontedly bestowed upon her when he gave his order. Reddy had not noticed this bad piece of service, although normally it would have curled his fastidious lip. He flicked nervously at the ash of his cigarette and looked across the table at the other two, first Morris with his scowling brow, his woolly hair horrid with grease, his eyelid drooping and his mouth pulled to one side to keep the cigarette smoke out of his eye, and then Oldroyd with his heavy face wrinkled with perplexity.

“He knows about it all right, then,” said Morris bitterly.

“Certain of it,” said Reddy. “I couldn’t have made a mistake. What would he have said that about Hunter for if he didn’t know?”

“It means the sack,” said Oldroyd. “It does that.”

“Tell me something I don’t know,” sneered Morris. “God damn it, of course it does. We know what Mac’s like as well as you do, if not better. The minute he comes back from Glasgow old Harrison’ll go trotting in there, and five minutes after that Mac’s buzzer will go, and Maudie will come and fetch us in to get the key of the street. Mac won’t ever let that by, silly old fool he is, with all his notions about ‘commercial honour’ and stuff like that.”

Morris ended by making a noise in the back of his throat indicating profound disgust; he flung himself back in his chair and filled his lungs deep with cigarette smoke.

“And we’ll be looking for a job,” said Oldroyd. “I’ve been out before and I know what it’s like.”

There was a north-country flavour about his speech: his I’s were softened into Ah’s.

“Know what it’s like? D’you think I don’t know too?” said Morris. “‘Dear Sir, In reply to your advertisement in to-day’s “Daily Express”’—bah, I’ve done hundreds of ’em. God, you’re lucky compared to me. I got a wife an’ two nippers, don’t you forget. An’ a fat chance we’ve got of finding another job. ‘Copies of two recent testimonials.’ What sort of testimonials do you think old Mac’s going to give us? Sacked for taking bribes! We’ll be starving in the streets in a fortnight’s time. Jesus, it’ll be cold. I’ve had some. And all I made out of that damned show was three quid—three measly quid, up to date. Just because that blinking fool, Cooper, couldn’t keep his mouth shut.”

He glowered round at the other two, and so evident was the fiendish bad temper which possessed him that they did not dare remind him of the other factors in the situation which oppressed them with grievances beyond the immediate one of prospective dismissal—they dared not remind him that the whole scheme for extracting bribes from Mr. Cooper was of his devising, nor that they had only shared three pounds between the two of them; their rogue’s agreement gave half the spoils to Morris and divided the other half between Reddy and Oldroyd.

Morris’s rage frightened Reddy even more than did the prospect of dismissal; never having been unemployed, and always having had a father and mother at his back, Reddy did not appreciate fully the gnawing fears which were assaulting the other two—hunger and cold were only words to him. Reddy knew his father would be pained and hurt by his ignominious dismissal, but his mother would stand up for him. It might be long before he could buy himself another new suit; it might even mean giving up his beloved motor-bicycle, although such a catastrophe was too stupendous to be really possible; those were realities which lay in the future, while across the table to him was reality in the present—Morris mad with fury, his thick lips writhing round his cigarette and his thick, hairy hands beating on the table.

That may have been Reddy’s first contact with reality in all his twenty-two years of life, for that matter. He was in touch with emotions and possibilities which he had only read about, inappreciatively, before that. It was strangely fascinating as well as terrifying. Morris had always exercised a certain fascination for him, possibly through the contrast of his virility and coarseness compared with his own frail elegance, but now in the hour of defeat the spell was stronger still. Certainly at the moment Reddy felt no regret at having allowed Morris to seduce them into the manipulation of correspondence which had left a clear field for the tenders of the Adelphi Artistic Studio, and had earned them six pounds in secret commissions and their approaching dismissal.

The blind ferocity in Morris’s face changed suddenly to something more deliberate and calculating.

“By God,” he said, leaning forward and tapping the table, “if we could get Harrison out of this business it’d be all right for us.”