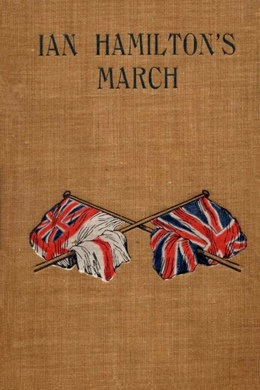 Ian Hamilton’s March picks up the action immediately after Churchill’s London to Ladysmith chronicles, documenting the eponymous general’s 400-mile advance from Bloemfontein to Pretoria. The march saw ten major battles and numerous skirmishes, culminating in the release of prisoners from the camp where Churchill himself was held. Written mostly in the field, this book offers a vivid, personal account of the conditions under which the Boer War was fought, as well as a fascinating look at the formative years of one of the twentieth century’s preeminent leaders.

Ladysmith, her garrison and her rescuers, were still recovering, the one from the effects of long confinement, the other from over-exertion. All was quiet along the Tugela except for the plashing of the waters, and from Hunger’s Poorte to Weenen no sound of rifle or cannon shot disturbed the echoes.

The war had rolled northward: the floods of invasion that had isolated–almost overwhelmed–Ladysmith and threatened to submerge the whole country had abated and receded, so that the Army of Natal might spread itself out to feed and strengthen at its leisure and convenience on the reconquered territory.

Knox’s (Ladysmith) Brigade went into camp at Arcadia, five miles west of the town. Howard’s (Ladysmith) Brigade retired to the breezy plains south of Colenso. Clery’s Division–for the gallant Clery, recovered from his sickness, had displaced the gallant and successful Lyttelton–moved north and encamped beyond Elandslaagte along the banks of Sunday’s River. Hunter’s Division was disposed with one brigade at Elandslaagte and one at Tinta Inyoni. Warren, whom it was no longer necessary to send to the Cape Colony, established himself and his two brigades north of Ladysmith, along the railway line to the Orange Free State. Brocklehurst, with the remnants of what had once been almost a Cavalry Division, and now could scarcely mount three squadrons, occupied a neighbouring plain, sending his regiments one by one to Colenso, or even Mooi River, to be re-horsed; and around all this great Army, resting after its labours and preparing for fresh efforts, the Cavalry brigades of Dundonald and Burn-Murdoch drew an immense curtain of pickets and patrols which extended from Acton Homes in the east, through Bester’s Station right round to Wessels Nek and further still, and which enabled the protected soldiers within to close their eyes by night and stretch their legs by day.

Meanwhile, the burghers had all retreated to the Drakensburg and the Biggarsburg and other refuges, from which elevated positions they defied intrusion or attack, and their scattered line stretched in a vast crescent even around our widely extended front from the Tintwa Pass, through Waschbank to Pomeroy.

All this might be war, but it was not journalism. The tempest for the moment had passed, and above the army in Natal the sky was monotonously blue. It was true that dark clouds hung near the northern horizon, but who should say when they would break? Not, at any rate, for three weeks, I thought, and so resolved to fill the interval by trying to catch a little of the tempest elsewhere.

After the relief of Ladysmith four courses offered themselves to Sir Redvers Buller. To stand strictly on the defensive in Natal and to send Lord Roberts every gun and man who could be spared; to break into the Free State by forcing Van Reenen’s Pass or the Tintwa; to attack the twelve thousand Boers in the Biggarsburg, clear Natal, and invade the Transvaal through the Vryheid district; and, lastly, to unite and reorganise and co-operate with Lord Roberts’s main advance either by striking west or north.

Which course would be adopted? I made inquiries. Staff officers, bland and inscrutable–it is wonderful how well men can keep secrets they have not been told–continued to smile and smile. Brigadiers frankly confessed their ignorance. The general-in-chief observed pleasantly that he would ‘go for’ the enemy as soon as he was ready, but was scarcely precise about when and where.

It was necessary to go to more humble sources for truth, and after diligent search I learned from a railway porter, or somebody like that, that all attempts to repair the bridge across the Sunday’s River had been postponed indefinitely. This, on further inquiry, proved to be true.

Now, what does this mean? It means, I take it, that no direct advance against the Biggarsburg is intended for some time; and as the idea of reducing the Natal Army to reinforce the Cape Colony forces has been definitely abandoned the western line of advance suggests itself.

It would be absurd to force Van Reenen’s Pass with heavy loss of life, when by waiting until the main Army has reached, let us say, Kroonstad, we could walk through without opposition; so that it looks very likely that the Natal troops will do nothing until Lord Roberts’s advance is more developed, and that then they will enter the Free State and operate in conjunction with him, all of which is strategy and common-sense besides. At any rate there will be a long delay.