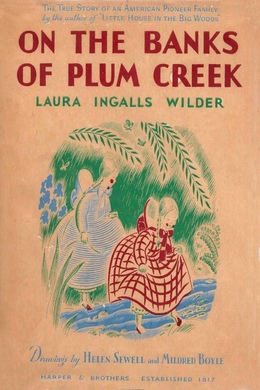 On the Banks of Plum Creek

The adventures of Laura Ingalls and her family continue as they leave the prairie and travel in their covered wagon to Walnut Grove, Minnesota. Here they settle in a new home made of sod beside the banks of Plum Creek. Soon Pa builds a wonderful new little house with real glass windows and a hinged door. Laura and her sister Mary go to school, help with the chores, and fish in the creek. At night everyone listens to the merry music of Pa’s fiddle. Misfortunes come in the form of a grasshopper plague and a terrible blizzard, but the pioneer family works hard together to overcome these challenges.

The Door in the Ground

The dim wagon track went no farther on the prairie, and Pa stopped the horses.

When the wagon wheels stopped turning, Jack dropped down in the shade between them. His belly sank on the grass and his front legs stretched out. His nose fitted in the furry hollow. All of him rested, except his ears. All day long for many, many days, Jack had been trotting under the wagon. He had trotted all the way from the little log house in Indian Territory, across Kansas, across Missouri, across Iowa, and a long way into Minnesota. He had learned to take his rest whenever the wagon stopped.

In the wagon Laura jumped up, and so did Mary. Their legs were tired of not moving. “This must be the place,” Pa said. “It’s half a mile up the creek from Nelson’s. We’ve come a good half-mile, and there’s the creek.”

Laura could not see a creek. She saw a grassy bank, and beyond it a line of willow-tree tops, waving in the gentle wind. Everywhere else the prairie grasses were rippling far away to the sky’s straight edge.

“Seems to be some kind of stable over there,” said Pa, looking around the edge of the canvas wagon-cover. “But where’s the house?”

Laura jumped inside her skin. A man was standing beside the horses. No one had been in sight anywhere, but suddenly that man was there. His hair was pale yellow, his round face was as red as an Indian’s, and his eyes were so pale that they looked like a mistake. Jack growled.

Pa spoke slowly and loudly. “I heard you want to go west. You trade your place?”

The man looked slowly at the wagon. He looked at the mustangs, Pet and Patty. After a while he said again, “Yah.”

Pa got out of the wagon, and Ma said, “You can climb out and run around, girls, I know you are tired, sitting still.”

Jack got up when Laura climbed down the wagon wheel, but he had to stay under the wagon until Pa said he might go. He looked out at Laura while she ran along a little path that was there.

The path went across short sunny grass, to the edge of the bank. Down below it was the creek, rippling and glistening in the sunshine. The willow trees grew up beyond the creek. Over the edge of the bank, the path turned and went slanting down, close against the grassy bank that rose up like a wall.

Laura went down it cautiously. The bank rose up beside her till she could not see the wagon. There was only the high sky above her, and down below her the water was talking to itself. Laura went a step farther, then one more step. The path stopped at a wider, flat place, where it turned and dropped down to the creek in stair-steps. Then Laura saw the door. The door stood straight up in the grassy bank, where the path turned. It was like a house door, but whatever was behind it was under the ground. The door was shut.

In front of it lay two big dogs with ugly faces. They saw Laura and slowly rose up. Laura ran very fast, up the path to the safe wagon. Mary was standing there, and Laura whispered to her, “There’s a door in the ground, and two big dogs—” She looked behind her. The two dogs were coming.

Jack’s deep growl rolled from under the wagon. He showed those dogs his fierce teeth. “Those your dogs?” Pa said to Mr. Hanson. Mr. Hanson turned and spoke words that Laura could not understand. But the dogs understood. One behind the other, they slunk over the edge of that bank, down out of sight.

Pa and Mr. Hanson walked slowly away toward the stable. The stable was small and it was not made of logs. Grass grew on its walls and its roof was covered with growing grasses, blowing in the wind.

Laura and Mary stayed near the wagon, where Jack was. They looked at the prairie grasses swaying and bending, and yellow flowers nodding. Birds rose and flew and sank into the grasses. The sky curved very high and its rim came neatly down to the faraway edge of the round earth.

When Pa and Mr. Hanson came back, they heard Pa say: “All right, Hanson. We’ll go to town tomorrow and fix up the papers. Tonight we’ll camp here.”

He unhitched Pet and Patty and led them to the creek to drink. He put them on their picket lines and helped Ma make camp for the night. Laura was quiet. She did not want to play and she was not hungry when they all sat eating supper by the camp fire.

“The last night out,” said Pa. “Tomorrow we’ll be settled again. The house is in the creek bank, Caroline.”

“I think you’ll find it very clean,” Pa told her. “Norwegians are clean people. It will be snug for winter, and that’s not far away.”