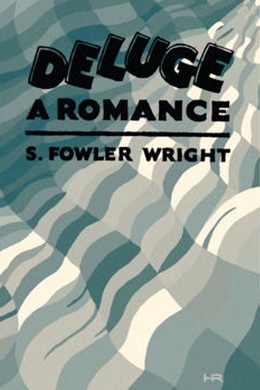 A great cataclysm shakes the world, and much of Great Britain sinks beneath the ocean during a terrifying windstorm that has already flattened most of mankind’s dwellings. Deluge is one of the most famous of the English catastrophe novels. Beautifully written and action packed-RKO Radio Pictures even filmed this story-the novel depicts a flood so severe that it destroys modern civilization, leaving the few survivors to adapt to the rigors of the natural world.

May 31 was Whitsunday. It was one of those rare days that the English climate would sometimes give to those who had grown weary of its more sinister vagaries, green and cool and sunny after a week of showers. It was on that day that Mrs. Templeton lunched at the Websters’. She was the wife of a newspaper proprietor; a lean, short-haired, painted woman, such as were common at that period. She had no children, and made a boast of her barrenness, which she implied was deliberate. “Besides,” she said, “how could we afford it, with income tax as it is, and a new car to be bought in the autumn? And then the cost of education!–I always think it is so wicked to bring a child into the world to be handicapped afterwards. Charles? Oh, men are so sentimental, and so inconsiderate–they never think what it means to us women–as Bishop Storr said at the last Congress…. Oh yes, I think your babies are beautiful–I dote on children–but I do hope you won’t be silly again—-“

And two days later–well, perhaps it was time.

The woman spoke with the assurance of one whose vices were popular, and who felt it was her hosts, rather than herself, who were on the defensive, for the crime of having two children in the nursery; and Helen was always polite to a guest, and had special reasons of importance (as they appeared then) for conciliating Mrs. Templeton. As for Martin, several years of law-court practice had taught him to conceal opinions till they were needed, and he contented himself with eliciting casually that she was a seventh child, and agreeing that there was something to be said for small families.

It was that night that the wind rose. It blew against the house with a steady pressure, free from gusts, and there was a continuous whining sound from the trees, very different from the rustle and creak of swaying boughs that is usual in time of tempest.

Martin, wakeful in an unusual restlessness, found it hard to turn his mind from this sound. It seemed to him that the trees whined in a conscious terror, and as though to an implacable power which they had no hope to propitiate.

The wind increased. He heard the loud crack of a tree-trunk that had snapped at the strain. There were many noises in the night. There was a crash, as though a chimney fell at the further end of the house. But Helen slept quietly through it, and while she did so, he would not rise to disturb her.

The wind came from the north. The room in which they slept had a northern wall, but the windows were on the western side. The door was on the south. It opened to a passage leading to the room where the children slept. There was no sound to alarm him from that direction.

The side of the house from which the sound of falling had come was vacant that night. The servants–a married couple–had been given leave over the weekend. The sudden illness of a brother had occasioned the absence of the nurse since the previous afternoon. They were alone in the house.

It was toward morning, in an interval of broken sleep, that he heard the telephone ringing in the room below with an unmistakable urgency. He rose and went down.

He found that it was a call from the local police station to tell him that a tree had fallen across the road adjoining his premises, and broken the fence of his field. Had he any animals loose in the field, and, if so, would he take steps to secure them? The inspector added that he had had so many accidents reported during the last hour that he was short of staff to deal with them. Could Mr. Webster’s man put some warning light upon the obstruction, such as would last till sunrise?

Mr. Webster’s man was away, but Mr. Webster would do it. The inspector was hurriedly grateful. He rang off. Martin went upstairs to dress hastily.

Helen was still sleeping peacefully, and when he waked her sufficiently to explain why he was going, she only said, “Don’t be long; it’s too cold to stay out at this time of night,” and was asleep again as she said it.

The house lay at some distance south of the road, and the wind blew from the north, so that it faced him almost directly as he entered the drive, to which the house stood sideways, facing west, and though the trees must have done something to break its force, he found that he could stand against it only with difficulty. He switched on the drive lamps (for the night was still dark) so that he found his way easily, though every yard was an effort, as though the air into which he stepped were solid substance into which a foot must be forced with difficulty.