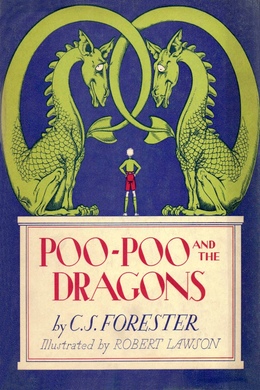 Poo-Poo and the Dragons

Forester came up with the premise for the book while he was at home in the Berkeley hills, minding his two boys while his wife Kathleen was away. The younger of the two, 8 year old George, went on a hunger strike; he refused to eat. Forester made up the stories to tell during dinnertime, but would only tell them if George would eat. If George stopped eating, Forester stopped talking mid-sentence. By the time Kathleeen returned home and everything returned to normal, there were a number of Poo-Poo stories, and 3 dragons. Forester collected the stories in manuscript form and Little Brown published it.

Once there was a boy called Poo-Poo. His other names were Harold Heavyside Brown, and it might be just as well if you were to remember them. On Saturday morning Poo-Poo was wondering what to do because all his friends were doing something else. First he tried to play inside the house, but his mother (her name was Mrs. Brown) turned him out because she wanted to do the cleaning. Then he went to play at the back of the house, but his father (and his name was Mr. Brown and he was a very clever man) sent him away because, as he said, he did not feel like answering questions that morning, and then Poo-Poo (what were his other names?) found himself in the front of the house and wondering harder than ever what he should do. Just in front of him there was a fuchsia bush growing under the window, and Harold helped the fuchsia bush a lot by popping all its buds open for it. When he had finished that he went on wondering what he could do, and so he wandered up inside one of the fuchsia flowers.

He walked a long way along the dark passage until he came out on to a vacant piece of land which had a dragon on it. He was a nice dragon, quite a fair size as dragons go, something between a duck and a motor bus, and he was running about in the long grass and swishing his tail, and he looked rather like a dachshund who has been taking lessons from a pollywog, and he was not quite as brilliant as dragons sometimes are because he was only black and blue and purple and white and green and red and yellow and orange and violet and magenta with spots of other colours here and there.

The dragon was very pleased to see Poo-Poo (what were his other names?), and he came galloping up to him through the long grass and he skipped about and he swished his long tail and he shot out his long tongue, which would have looked like an eel if it had not looked like a slice of bacon, and he licked Poo-Poo’s hand and then he galloped away, and he came back and licked Poo-Poo’s legs so that they tickled, and he ran round in circles and he was a very friendly dragon indeed. So Poo-Poo patted him behind the ears and tried to stroke his back and found it was too spiky, and he went on across the field with the dragon galloping round him. And at the far side of the field there was a little wooden building with a sign over it, and on the sign were the words “Maxwell Murray McIntosh,” “Chimney-pots constructed.” And inside the building there was a man sitting in a chair making belts out of umbrella handles.

Now Poo-Poo (don’t forget what his other name was) was a very polite boy, and so he went up to the man and said, “Excuse me.”

And Poo-Poo said, “Excuse me, Mr. McIntosh, but is this your dragon?”

And Mr. McIntosh said, “Now do I look like a man who had a dragon?”

And Poo-Poo said, “I’ve never seen anyone who did have a dragon.”

“I think I’m going to one of these days,” said Poo-Poo.

“Well, I shan’t stop you,” said Mr. McIntosh (can you remember what Mr. McIntosh’s first names were?).

“I should like to know the way home if you please,” said Poo-Poo (remember he was always a very polite boy).

“Thank you,” said Poo-Poo, still being very polite and rubbing his leg where the dragon had licked it impatiently. “I’ll try to remember that. Good morning.” And Poo-Poo went on across the field with the dragon skipping and galumphing, clippety-clop round and round him.

And they came to a tremendous big ladder, and Poo-Poo started to climb it, and he had only got a little way up when the dragon came up the ladder with a tremendous rush after him and climbed straight on Poo-Poo’s shoulder and went on up the ladder in front of him. Have you ever seen a dragon running up a ladder? It is one of the most surprising things you could see anywhere. He went up jumping, with all four feet at once, about six rungs at a time, and at every jump he made the ladder spring in and out and all the spines on his back went “rattle-rattle,” and on the end of his tail there was a spike like a big arrowhead which shook in Poo-Poo’s face every time the dragon made a jump, so that Poo-Poo had to hold on very tight to the ladder and shout up to the dragon,

“Take your silly old tail out of my face and don’t jump so much.” Poo-Poo only had to say it once, and then the dragon coiled up his tail in a neat roll and walked up the ladder the way respectable dragons walk up a ladder, with Poo-Poo climbing up behind him and needing to puff a little bit as the ladder went on and on and on.