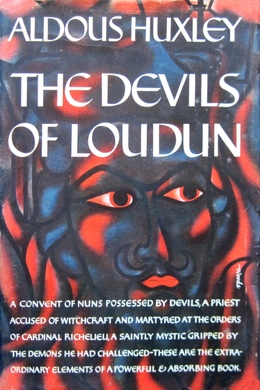 In 1634 Urbain Grandier, a handsome and dissolute priest of the parish of Loudun was tried, tortured and burnt at the stake. He had been found guilty of conspiring with the devil to seduce an entire convent of nuns in what was the most sensational case of mass possession and sexual hysteria in history. Grandier maintained his innocence to the end and four years after his death the nuns were still being subjected to exorcisms to free them from their demonic bondage. Huxley’s vivid account of this bizarre tale of religious and sexual obsession transforms our understanding of the medieval world.

It was in 1605 that Joseph Hall, the satirist and future bishop, made his first visit to Flanders. “Along our way how many churches saw we demolished, nothing left but rude heaps to tell the passenger, there hath been both devotion and hostility. Oh, the miserable footsteps of war! … But (which I wondered at) churches fall, and Jesuits’ colleges rise everywhere. There is no city where these are not rearing or built. Whence cometh this? Is it for that devotion is not so necessary as policy? These men (as we say of the fox) fare best when they are most cursed. None so much spited of their own; none so hated of all; none so opposed of by ours; and yet these ill weeds grow.”

They grew for a very simple and sufficient reason: the public wanted them. For the Jesuits themselves, “policy,” as Hall and his whole generation knew very well, was the first consideration. The schools had been called into existence for the purpose of strengthening the Roman Church against its enemies, the “libertines” and the Protestants. The good fathers hoped, by their teaching, to create a class of educated laymen totally devoted to the interests of the Church. In the words of Cerutti—words which drove the indignant Michelet almost to frenzy—“as we swathe the limbs of an infant in the cradle to give them a right proportion, so it is necessary from his earliest youth to swathe, so to speak, his will, that it may preserve through his life a happy and salutary suppleness.” The spirit of domination was willing enough, but the flesh of propagandist method was weak. In spite of the swaddling of their wills, some of the Jesuits’ best pupils left school to become free thinkers or even, like Jean Labadie, Protestants. So far as “policy” was concerned, the system was never as efficient as its creators had hoped. But the public was not interested in policy; the public was interested in good schools, where their boys could learn all that a gentleman ought to know. Better than most other purveyors of education, the Jesuits supplied the demand. “What did I observe during the seven years I passed under the Jesuits’ roof? A life full of moderation, diligence and order. They devoted every hour of the day to our education, or to the strict fulfillment of their vows. As evidence of this, I appeal to the testimony of the thousands who, like myself, were educated by them.” So wrote Voltaire. His words bear witness to the excellence of the Jesuits’ teaching methods. At the same time, and yet more emphatically, his entire career bears witness to the failure of that “policy,” which the teaching methods were intended to serve.

When Voltaire went to school, the Jesuit colleges were familiar features of the educational scene. A century earlier their merits had seemed positively revolutionary. In an age when most pedagogues were amateurs in everything except the handling of the birch, their disciplinary methods were relatively humane and their professors carefully chosen and systematically trained. They taught a peculiarly elegant Latin and the very latest in optics, geography and mathematics, together with “dramatics” (their end-of-term theatricals were famous), good manners, respect for the Church and (in France, at least, and after Henri IV’s conversion) obedience to the royal authority. For all these reasons the Jesuit colleges recommended themselves to every member of the typical upper-class family—to the tender-hearted mother, who could not bear to think of her darling undergoing the tortures of an old-fashioned education; to the learned ecclesiastical uncle, with his concern for sound doctrine and a Ciceronian style; and finally to the father who, as a patriotic official, approved of monarchical principles and, as a prudent bourgeois, counted on the Company’s backstairs influence to help their pupil to a job, a place at court, an ecclesiastical sinecure. Here, for example, is a very substantial couple—M. Corneille of Rouen, Avocat du Roy à la Table de Marbre du Palais, and his wife, Marthe le Pesant. Their son, Pierre, is such a promising boy that they decide to send him to the Jesuits. Here is M. Joachim Descartes, Counselor of the Parlement of Rennes. In 1604 he takes his youngest—a bright little fellow of eight, called René—to the recently founded and royally endowed Jesuit College of La Flèche. And here too, at about the same date, is the learned Canon Grandier of Saintes. He has a nephew, son of another lawyer not quite so rich and aristocratic as M. Descartes or M. Corneille, but still eminently respectable. The boy, called Urbain, is now fourteen years old and wonderfully clever. He deserves to be given the best of educations, and in the neighborhood of Saintes the best education available is to be had at the Jesuit College of Bordeaux.