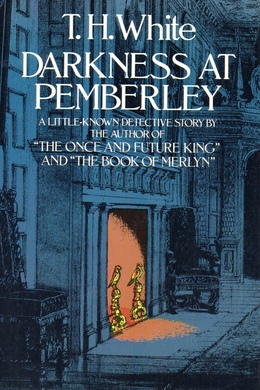 Described by T.H. White as a study in claustrophobia and fear. Police Inspector Buller is called upon to investigate two mysterious deaths in a Cambridge College. The Inspector is able to solve the mystery, but cannot find sufficient evidence to convict the clever murderer. The murderer and Buller are reunited when an attempt is made on the life of Inspector Buller’s host Charles Darcy at the country retreat of Pemberley. The story climaxes when it is discovered that the killer is hiding within the network of large chimneys—and he has abducted the hostess into the gloom with him.

Mr. Mauleverer stood in the middle of the Old Court and shouted upwards to the occupier of C4. The latter poked his head out of the window and answered: “Coming!” Then the head disappeared; the light swallowed itself with a leap; footsteps echoed on the wooden stairs. Mr. Mauleverer was taking the occupier, an undergraduate named Weans, to the Festival Theatre. He was also taking Mr. Beedon, the history don whose rooms were on A staircase.

As they moved up the court Mr. Mauleverer said: “There’s a light in Beedon’s room. Just run up and see if he’s ready.” Weans ran up the stairs and turned to the right at the first landing. Mr. Beedon’s rooms were on the first floor, with windows looking over the court on one side and across Copper Street on the other. The landing opposite Mr. Beedon’s door was very narrow and unlighted. Weans could scarcely make out the white letters MR. BEEDON above the door. The door was sported, and he knocked. There was no answer. Weans conscientiously said the Lord’s Prayer and knocked again. After a minute he clattered down the stairs to Mr. Mauleverer and said: “Mr. Beedon’s door is sported. I can’t make him hear.”

The two stood on the cobbled pathway opposite the lighted window and shouted “Beedon!” in unison. Still no reply.

“How very remiss of him,” said Mr. Mauleverer. “I do think he might have remembered an invitation to the theatre. I expect he’s in his study: the one with the window on the other side.”

Weans asked helpfully: “Shall I go round to Copper Street and shout from there?”

Two pairs of footsteps clumped up the stairs again and halted in the darkness of the tiny landing. Mr. Mauleverer called “Beedon! Beedon!” and thumped the door with his umbrella. He stooped down and tried to pull the door open–there was no handle–by inserting the tips of his fingers into the T-shaped keyhole. But it was locked.

“What a nuisance!” exclaimed Mr. Mauleverer. “How very boring! One more shout together”:

In the silence which followed, a gramophone began to play inside the room.

“Really!” said Mr. Mauleverer, “if we can hear his gramophone he can hear us. How stupid! I suppose he’s forgotten all about the theatre and thinks this is a rag or something.” Then, raising his voice and giving another bang with his umbrella: “Beedon! What about the theatre?”

The gramophone went on playing without interruption. Muttering something about rudeness, Mr. Mauleverer led his companion down the stairs again: started for the Festival Theatre in an irritable frame of mind.

The serious undergraduate in the rooms above Mr. Beedon’s shut his book with a sigh, switched off his light and came lumbering down the stairs. He had worked nine hours and felt that a walk to Grantchester before eleven would do him good. He knew that he must be careful not to overdo it. There was a car in Copper Street, and a small crowd of people. He passed by on the other side, since he disliked accidents, and tramped the boring road to Grantchester, thinking about Byron’s “Don Juan” and its Relation to Restoration Comedy.

The Master of the college pottered into the Old Court five minutes later and made for Beedon’s rooms. He stood on the dark landing for some time, wheezing a little, and slipped something into Beedon’s letter box. There was silence inside the room, except for a thin scraping or swashing noise, like somebody mowing rhythmically with a scythe, only fast and quietly. The Master tiptoed down the stairs, looked out under the archway, and, seeing nobody about, walked quickly to the centre of the Court. There he resumed his shuffle and disappeared in time towards his own Lodge.

At about half past ten the Chaplain, biting his fingers nervously, made his way up the stairs and stood opposite Mr. Beedon’s door. He did not knock. As he waited, the telephone bell rang inside. There was no answer. The Chaplain looked over his shoulder and, taking his sport key out of his pocket, fitted it into Mr. Beedon’s lock. It fitted. The Chaplain opened the door half an inch, so that a beam of light struck across the landing. Apparently intimidated by this, he stood hesitating for a moment. Then, closing the door again with infinite precaution, he also tiptoed down the stairs.

Finally, at midnight, the porter Rudd went round to turn off the lights on the staircases. He did not content himself with turning off the light at the bottom of A staircase, but went up to the landing and stood for a few moments opposite Mr. Beedon’s door, in silent reflection.