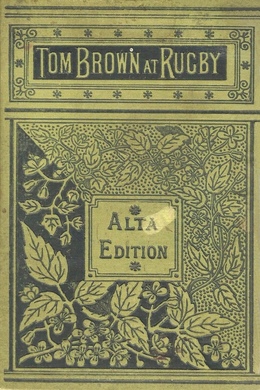 Tom’s second year starts at a private school, but due to an epidemic of fever in the area, all the school’s boys are sent home, and Tom is transferred mid-term to Rugby School. On his arrival, the eleven-year-old Tom Brown is looked after by a more experienced classmate, Harry ‘Scud’ East. Tom’s nemesis at Rugby is the bully Flashman. The intensity of the bullying increases, and, after refusing to hand over a sweepstake ticket for the favourite in a horse race, Tom is deliberately burned in front of a fire. Tom and East defeat Flashman with the help of Diggs, a kind, comical, older boy. In their triumph they become unruly…

The Browns have become illustrious by the pen of Thackeray and the pencil of Doyle, within the memory of the young gentlemen who are now matriculating at the universities. Notwithstanding the well-merited but late fame which has now fallen upon them, any one at all acquainted with the family must feel that much has yet to be written and said before the British nation will be properly sensible of how much of its greatness it owes to the Browns. For centuries, in their quiet, dogged, homespun way, they have been subduing the earth in most English counties, and leaving their mark in American forests and Australian uplands. Wherever the fleets and armies of England have won renown, there stalwart sons of the Browns have done yeomen’s work. With the yew bow and cloth-yard shaft at Cressy and Agincourt–with the brown bill and pike under the brave Lord Willoughby–with culverin and demi-culverin against Spaniards and Dutchmen–with hand-grenade and sabre, and musket and bayonet, under Rodney and St. Vincent, Wolfe and Moore, Nelson and Wellington, they have carried their lives in their hands; getting hard knocks and hard work in plenty, which was, on the whole, what they looked for, and the best thing for them; and little praise or pudding, which indeed they, and most of us, are better without. Talbots and Stanleys, St. Maurs, and such-like folk have led armies and made laws time out of mind; but those noble families would be somewhat astounded–if the accounts ever came to be fairly taken–to find how small their work for England has been by the side of that of the Browns.

These latter, indeed, have until the present generation rarely been sung by poet, or chronicled by sage. They have wanted their “sacer vates,” having been too solid to rise to the top by themselves, and not having been largely gifted with the talent of catching hold of, and holding on tight to, whatever good things happened to be going–the foundation of the fortunes of so many noble families. But the world goes on its way, and the wheel turns, and the wrongs of the Browns, like other wrongs, seem in a fair way to get righted. And this present writer, having for many years of his life been a devout Brown-worshipper, and moreover having the honor of being nearly connected with an eminently respectable branch of the great Brown family, is anxious, so far as in him lies, to help the wheel over, and throw his stone on to the pile.

However, gentle reader, or simple reader, whichever you may be, lest you should be led to waste your precious time upon these pages, I make so bold as at once to tell you the sort of folk you’ll have to meet and put up with, if you and I are to jog on comfortably together. You shall hear at once what sort of folk the Browns are, at least my branch of them; and then if you don’t like the sort, why cut the concern at once, and let you and I cry quits before either of us can grumble at the other. In the first place, the Browns are a fighting family. One may question their wisdom, or wit, or beauty, but about their fight there can be no question. Wherever hard knocks of any kind, visible or invisible, are going, there the Brown who is nearest must shove in his carcass. And these carcasses for the most part answer very well to the characteristic propensity; they are a square-headed and snake-necked generation, broad in the shoulder, deep in the chest, and thin in the flank, carrying no lumber. Then for clanship, they are as bad as Highlanders; it is amazing the belief they have in one another. With them there is nothing like the Browns, to the third and fourth generation. “Blood is thicker than water,” is one of their pet sayings. They can’t be happy unless they are always meeting one another. Never was such people for family gatherings, which, were you a stranger, or sensitive, you might think had better not have been gathered together. For during the whole time of their being together they luxuriate in telling one another their minds on whatever subject turns up; and their minds are wonderfully antagonistic, and all their opinions are downright beliefs. Till you’ve been among them some time and understand them, you can’t think but that they are quarrelling. Not a bit of it; they love and respect one another ten times the more after a good set family arguing bout, and go back, one to his curacy, another to his chambers, and another to his regiment, freshened for work, and more than ever convinced that the Browns are the height of company.