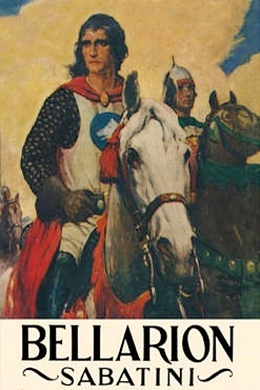 Set against a backdrop of pre-Renaissance Italy (a larger than life time, with swaggering condottieri, Machiavellian plotting, and high stakes in politics and war) convent-bred orphan Bellarion is sidetracked almost immediately upon setting out on a journey from the monastery at Cigliano to study at Pavia. The adventure and practical lessons he finds along the way replace the further education he craves…

‘Half god, half beast,’ the Princess Valeria once described him, without suspecting that the phrase describes not merely Bellarion, but Man.

Aware of this, the anonymous chronicler who has preserved it for us goes on to comment that the Princess said at once too much and too little. He makes phrases in his turn—which I will spare you—and seeks to prove, that, if the moieties of divinity and beastliness are equally balanced in a man, that man will be neither good nor bad. Then he passes on to show us a certain poor swineherd, who rose to ultimate eminence, in whom the godly part so far predominated that naught else was humanly discernible, and a great prince—of whom more will be heard in the course of this narrative—who was just as the beasts that perish, without any spark of divinity to exalt him. These are the extremes. For each of the dozen or so intermediate stages which he discerns, our chronicler has a portrait out of history, of which his learning appears to be considerable.

From this, from his general manner, from the fact that most of his illustrations are supplied by Florentine sources, and from the austerely elegant Tuscan language in which he writes, a fairly definite conclusion is possible on the score of his identity. It is more than probable that this study of Bellarion the Fortunate (Bellarione Il Fortunato) belongs to that series of historical portraits from the pen of Niccolò Macchiavelli, of which ‘The Life of Castruccio Castracane’ is perhaps the most widely known. Research, however, fails to discover the source from which he draws. Whilst many of his facts agree completely with those contained in the voluminous, monkish ‘Vita et Gesta Bellarionis,’ left us by Fra Serafino of Imola, whoever he may have been, yet discrepancies are frequent and irreconcilable.

Thus, at the very outset, on the score of his name, Macchiavelli (to cling to my assumption) tells us that he was called Bellarion not merely because he was a man of war, but because he was the very child of War, born as it were out of the very womb of conflict—‘e di guerra propriamente partorito.’ The use of this metaphor reveals a full acquaintance with the tale of the child’s being plucked from the midst of strife and alarums. But Fra Serafino’s account of the name is the only one that fits into the known facts. That this name should have been so descriptive of Bellarion’s after life merely provides one of those curious instances of homonymy in which history abounds.

Continuing his comments upon the Princess Valeria’s phrase, Macchiavelli states that Bellarion’s is not a nature thus to be packed into a sentence. Because of his perception of this fact, he wrote his biographical sketch. Because of my perception of it, I have embarked upon this fuller narrative.

I choose to begin at a point where Bellarion himself may be said to make a certain beginning. I select the moment when he is to be seen standing upon the threshold of the secular world, known to him until that moment only from the writings of other men, yet better known to him thus than it is to many who have lived a lifetime among their fellows. After all, to view a scene from a distance is to enjoy advantages of perspective denied to the actors in that scene.

Bellarion’s reading had been prodigious. There was no branch of learning—from the Theological Fathers to Vegetius Hyginus on ‘The Art of War’—to which he had not addressed his eager spirit. And his exhaustion of all immediately available material for study was one of the causes of his going forth from the peace of the convent of which he was a nursling, in quest of deeper wells of learning, to slake his hot intellectual thirst. Another cause was a certain heretical doctrine of which it was hoped that further study would cure him; a doctrine so subversive of theological teaching that a hundred years later it must have made him closely acquainted with the operations of the Holy Office and probably—in Spain certainly—have brought him to the fire. This abominable heresy, fruit of much brooding, was that in the world there is not, nor can be, such a thing as sin. And it was in vain that the Abbot, who loved him very dearly, sought by argument to convert him.

‘It is your innocence that speaks. Alas, my child, in the world, from which hitherto you have been mercifully sheltered, you will find that sin is not only real but terribly abundant.’

Bellarion answered with a syllogism, the logical formula to which he had reduced his doctrine. He presented it in the Socratic manner of inquiry, which was the method of argument he ever preferred.

‘Are not all things in the world from God? Is not God the fount of all goodness? Can, therefore, any created thing be other than good?’

‘And the devil, then?’ quoth the Abbot.

Bellarion smiled, a singularly sweet smile that had power to draw men’s love and lead them into agreement with him.