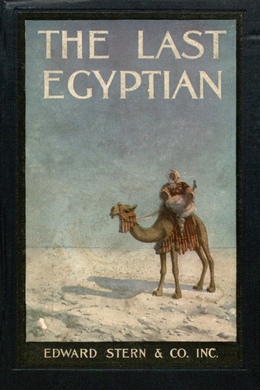 A Romance of the Nile

An Egyptian romance of the present time, full of the charm of the land of the Nile and dramatic in plot and setting. The book is a most creditable romance vibrant with human nature and the mystery and fascination of the East. A young Englishman, with an abundant fortune and a passion for Egyptology, visits the village of Al-Kusiyeh because of the rumor that ancient arms and jewels had come from the Sheik. There he meets Kara, the lineal descendant of the great Athka-Ra and grandson of Princess Hatatcha, who, at seventeen, captivated London and Lord Roane, who divorced his wife for her sake, but whom she refused to marry. Their daughter was Kara’s mother. Lord Roan’s grand-daughter was the one unselfish, honest love of his life, and he and his dissolute son are given government positions in Cairo, where the Englishman and Kara both meet, and wish to marry the grand-daughter. Jealousy, treachery, plot and counterplot are thrown against a background of ancient custom and belief. It is a story of a vendetta, in which an Egyptian prince—to avenge the wrong of his grandmother—pits himself against the love of an Englishman for the possession of the woman who is by blood his cousin.

The sun fell hot upon the bosom of the Nile and clung there, vibrant, hesitating, yet aggressive, as if baffled in its desire to penetrate beneath the river’s lurid surface. For the Nile defies the sun, and relegates him to his own broad domain, wherein his power is undisputed.

On either side the broad stream humanity shrank from Ra’s seething disc. The shaduf workers had abandoned their skin-covered buckets and bamboo poles to seek shelter from the heat beneath a straggling tree or a straw mat elevated on stalks of ripe sugar-cane. The boats of the fishermen lay in little coves, where the sails were spread as awnings to shade their crews. The fellaheen laborers had all retired to their clay huts to sleep through this fiercest period of the afternoon heat.

On the Nile, however, a small steam dahabeah puffed lazily along, stemming with its slow motion the sweep of the mighty river toward the sea. The Arab stoker, naked and sweating, stood as far as possible from the little boiler and watched it with a look of absolute repulsion upon his swarthy face. The engineer, also an Arab, lay stretched upon the deck half asleep, but with both ears alert to catch any sound that might denote the fact that the straining, rickety engine was failing to perform its full duty. Back of the tiny cabin sat the dusky steersman, as naked and inert as his fellows, while under the deck awning reclined the one white man of the party, a young Englishman clothed in khaki knickerbockers and a white silk shirt well open at the throat.

There were no tourists in Egypt at this season. If you find a white man on the Nile in April, he is either attached to some exploration party engaged in excavations or a government employee from Cairo, Assyut or Luxor, bent upon an urgent mission.

The dahabeah was not a government boat, though, so that our Englishman was more likely to be an explorer than an official. It was evident he was no stranger to tropical climes, if we judged by his sun-browned skin and the quiet resignation to existing conditions with which he puffed his black briar and relaxed his muscular frame. He did not sleep, but lay with his head upon a low wicker rest that enabled him to sweep the banks of the Nile with his keen blue eyes.

The three Arabs regarded their master from time to time with stealthy glances, in which wonder was mingled with a certain respect. The foreigner was a fool to travel during the heat of the day; no doubt of that at all. The native knows when to work and when to sleep–a lesson the European never learns. Yet this was no casual adventurer exploiting his folly, but a man who had lived among them for years, who spoke Arabic fluently and could even cipher those hieroglyphics of the dead ages which abound throughout modern Egypt. Hassan, Abdallah and Ali knew this well, for they had accompanied Winston Bey on former expeditions, and heard him translate the ugly signs graven upon the ugly stones into excellent Arabic. It was all very wonderful in its way, but quite useless and impractical, if their opinion were allowed. And the master himself was impractical. He did foolish things at all times, and sacrificed his own comfort and that of his servants in order to accomplish unnecessary objects. Had he not paid well for his whims, Winston Bey might have sought followers in vain; but the Arab will even roast himself upon the Nile on an April afternoon to obtain the much-coveted gold of the European.

At four o’clock a slight breeze arose; but what matter? The journey was nearly done now. They had rounded a curve in the river, and ahead of them, lying close to the east bank, were the low mountains of Gebel Abu Fedah. At the south, where the rocks ended abruptly, lay a small grove of palms. Between the palms and the mountains was the beaten path leading from the Nile to the village of Al-Kusiyeh, a mile or so inland, which was the particular place the master had come so far and so fast to visit.

The breeze, although hardly felt, served to refresh the enervated travelers. Winston sat up and knocked the ashes from his pipe, making a careful scrutiny at the same time of the lifeless landscape ahead.

The mountains of gray limestone looked very uninviting as they lay reeking under the terrible heat of the sun. From their base to the river was no sign of vegetation, but only a hardened clay surface. The desert sands had drifted in in places. Even under the palms it lay in heavy drifts, for the land between the Nile and Al-Kusiyeh was abandoned to nature, and the fellaheen had never cared to redeem it.

The water was deep by the east bank, for the curve of the river swept the current close to the shore. The little dahabeah puffed noisily up to the bank and deposited the Englishman upon the hard clay. Then it backed across into shallow water, and Hassan shut down the engine while Abdallah dropped the anchor.