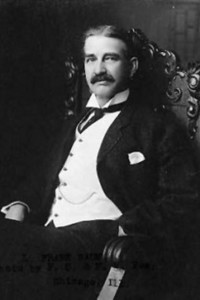 Lyman Frank Baum was an American author, actor, and independent filmmaker best known as the creator, along with illustrator W. W. Denslow, of one of the most popular books in American children’s literature, The Wonderful Wizard of Oz, better known today as simply The Wizard of Oz. Born in Chittenango, New York, into a Protestant family of German origin, he was the seventh of nine children born to Cynthia Stanton and Benjamin Ward Baum, only five of whom survived into adulthood. He was named “Lyman” after his father’s brother, but always disliked the name, and preferred to go by “Frank”.

Frank started writing at an early age, perhaps due to an early fascination with printing. When his father bought him a cheap printing press he used it to produce The Rose Lawn Home Journal with the help of his younger brother Harry. Then in 1897 he wrote and published Mother Goose in Prose, illustrated by Maxfield Parrish. Mother Goose was a moderate success, and allowed Baum to quit his day job.

In 1900, Baum and Denslow published The Wonderful Wizard of Oz to much critical and financial acclaim, the book went on to become the bestselling children’s book for two years after its initial publication, and the legacy was born. (source: Wikipedia)

Santa Claus lives in the Laughing Valley. On one side of the Valley is the mighty Forest of Burzee, home of the fairies. At the other side stands a terr...read more »

The fourth book in Baum’s Oz series, Dorothy returns to lands of magic and fantasy with her cousin Zeb, kitten Eureka, and a cab-horse named Jim. They e...read more »

Peace, prosperity, and happiness are the rule in the marvelous Land of Oz, but in a faraway corner of this magical domain dwell two tribes–the Flatheads...read more »

Published three years before the author achieved fame as the creator of The Wonderful Wizard of Oz, this engaging volume, inspired by well-known nursery...read more »

Blown overboard while sailing with her uncle, Dorothy finds herself in the fairy realm of Ev. She sets out with her friends to rescue the Queen of Ev an...read more »

Prince Inga of Pingaree and King Rinkitink and their companions have adventures that lead to the land of the Nomes and, eventually, Oz. When all the inh...read more »

Sam Steele, sixteen years old, is the son of a sea captain. His father is reported killed in a shipwreck, and Sam is quickly cheated of his inheritance....read more »

Trot is the young daughter of a California schooner captain. She is accompanied by Captain Bill – an old sailor with a wooden leg who was her father’s c...read more »

Book 6 of L. Frank Baum’s beloved OZ books, in which the wicked Nome king, who plots to conquer Oz and enslave its people, prepares to invade the Emeral...read more »

An Egyptian romance of the present time, full of the charm of the land of the Nile and dramatic in plot and setting. The book is a most creditable roman...read more »

The Life and Adventures of Santa Claus (1902)

Draw close to the fire, all you who believe in the spirit of Christmas, whether you call it Santa Claus, or simply good will to men; and listen to the s...read more »

You expect Button-Bright to get lost, but not Ozma! As soon as it is discovered that not only is the ruler of Oz lost but so are all of the kingdom’s im...read more »

There’s trouble once again in the land of Oz! A mischievous boy named Kiki Aru has discovered a magical word–Pyrxqzgl–that can transform him and anyone ...read more »

The Marvelous Land of Oz is the second book in Baum’s Oz series. The series chronicles the further adventures of Dorothy both in and out of Oz, as she d...read more »

Forced to venture out of the dark forest, Unc Nunkie and Ojo the Unlucky call on the Crooked Magician, who introduces them to his latest creation: a liv...read more »

Dorothy and her friend, Polychrome, find themselves on a road through some strange places, to the Land of the Winkies, and on to beautiful Emerald City....read more »

L Frank Baum considered The Scarecrow of Oz to be his best book. It opens with Trot and Cap’n Bill rowing along a shore of the Pacific Ocean, a mighty w...read more »

Enchanting fantasy by creator of beloved “Oz” stories whisks young readers away on an exciting underwater adventure where they meet a school of beguilin...read more »

In the twelfth Oz story, the Tin Woodman and the Scarecrow meet Woot, a Gillikin boy. The Woodman tells him how the Wicked Witch of the East (punishing ...read more »

When a cyclone hits Kansas, Dorothy and her little dog, Toto, are whisked away to the magical land of Oz. All alone in this strange world, they wonder h...read more »

Join Tik-Tok, the Shaggy Man, and a host of other friends - both old and new - on an exciting, imaginative journey through the world of Oz. Betsy Bobbin...read more »