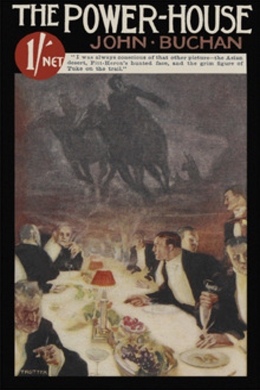 When his friend Charles Pitt-Heron vanishes mysteriously, Sir Edward Leithen is at first only mildly concerned. But a series of strange events that follow Pitt-Heron’s disappearance convinces Leithen that he is dealing with a sinister secret society. Their codename is ‘The Power-House’. The authorities are unable to act without evidence. As he gets deeper involved with the underworld, Leithen finds himself facing the enemy alone and in terrible danger.

It all started one afternoon early in May when I came out of the House of Commons with Tommy Deloraine. I had got in by an accident at a by-election, when I was supposed to be fighting a forlorn hope, and as I was just beginning to be busy at the Bar I found my hands pretty full. It was before Tommy succeeded, in the days when he sat for the family seat in Yorkshire, and that afternoon he was in a powerful bad temper. Out of doors it was jolly spring weather; there was greenery in Parliament Square and bits of gay colour, and a light wind was blowing up from the river. Inside a dull debate was winding on, and an advertising member had been trying to get up a row with the Speaker. The contrast between the frowsy place and the cheerful world outside would have impressed even the soul of a Government Whip.

Tommy sniffed the spring breeze like a supercilious stag.

“This about finishes me,” he groaned. “What a juggins I am to be mouldering here! Joggleberry is the celestial limit, what they call in happier lands the pink penultimate. And the frowst on those back benches! Was there ever such a moth-eaten old museum?”

“It is the Mother of Parliaments,” I observed.

“Damned monkey-house,” said Tommy. “I must get off for a bit or I’ll bonnet Joggleberry or get up and propose a national monument to Guy Fawkes or something silly.”

I did not see him for a day or two, and then one morning he rang me up and peremptorily summoned me to dine with him. I went, knowing very well what I should find. Tommy was off next day to shoot lions on the Equator, or something equally unconscientious. He was a bad acquaintance for a placid, sedentary soul like me, for though he could work like a Trojan when the fit took him, he was never at the same job very long. In the same week he would harass an Under-Secretary about horses for the Army, write voluminously to the press about a gun he had invented for potting aeroplanes, give a fancy-dress ball which he forgot to attend, and get into the semi-final of the racquets championship. I waited daily to see him start a new religion.

That night, I recollect, he had an odd assortment of guests. A Cabinet Minister was there, a gentle being for whom Tommy professed public scorn and private affection; a sailor, an Indian cavalry fellow; Chapman, the Labour member, whom Tommy called Chipmunk; myself, and old Milson of the Treasury. Our host was in tremendous form, chaffing everybody, and sending Chipmunk into great rolling gusts of merriment. The two lived adjacent in Yorkshire, and on platforms abused each other like pick-pockets.

Tommy enlarged on the misfits of civilised life. He maintained that none of us, except perhaps the sailor and the cavalryman, were at our proper jobs. He would have had Wytham–that was the Minister–a cardinal of the Roman Church, and he said that Milson should have been the Warden of a college full of port and prejudice. Me he was kind enough to allocate to some reconstructed Imperial General Staff, merely because I had a craze for military history. Tommy’s perception did not go very deep. He told Chapman he should have been a lumberman in California. “You’d have made an uncommon good logger, Chipmunk, and you know you’re a dashed bad politician.”

When questioned about himself he became reticent, as the newspapers say. “I doubt if I’m much good at any job,” he confessed, “except to ginger up my friends. Anyhow I’m getting out of this hole. Paired for the rest of the session with a chap who has lockjaw. I’m off to stretch my legs and get back my sense of proportion.”

Someone asked him where he was going, and was told “Venezuela, to buy Government bonds and look for birds’ nests.”

Nobody took Tommy seriously, so his guests did not trouble to bid him the kind of farewell a prolonged journey would demand. But when the others had gone, and we were sitting in the little back smoking-room on the first floor, he became solemn. Portentously solemn, for he wrinkled up his brows and dropped his jaw in the way he had when he fancied he was in earnest.

“I’ve taken on a queer job, Leithen,” he said, “and I want you to hear about it. None of my family know, and I would like to leave someone behind me who could get on to my tracks if things got troublesome.”

I braced myself for some preposterous confidence, for I was experienced in Tommy’s vagaries. But I own to being surprised when he asked me if I remembered Pitt-Heron.