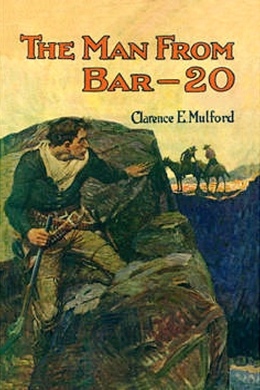 A Story of the Cow Country

When Hopalong Cassidy’s friend, Johnny Nelson, left Bar-20 searching for even greater adventure, and joined the CL Ranch, he found more than he bargained for. He found a hidden valley between Twin Buttes with over 200 of CL cattle rebranded QE. He found a gang of rustlers out to steal the rest of CL’s beef. He found the country’s fastest gun-fighter looking to cut him down. What he should have found was a fast way out of that valley. But Hoppy never told him how to turn tail and run.

A horseman rode slowly out of a draw and up a steep, lava-covered ridge, singing “The Cowboy’s Lament,” to the disgust of his horse, which suddenly arched its back and stopped the song in the twenty-ninth verse.

“Dearly Beloved,” grinned the rider, after he had quelled the trouble, “yore protest is heeded. ‘Th’ Lament’ ceases, instanter; an’ while you crop some of that grass, I’ll look around and observe th’ scenery, which shore is scrambled. Now, them two buttes over there,” leaning forward to look around a clump of brush, “if they ain’t twins, I’ll eat–”

He ducked and dismounted in one swift movement to the vengeful tune of a screaming bullet over his head, slapped the horse and jerked his rifle from its scabbard. As the horse leaped down the slope of the ridge there was no sign of any living thing to be seen on the trail. A bush rustled near the edge of a draw, a peeved voice softly cursed the cacti and Mexican locust; and a few minutes later the shadow of a black lava bowlder grew suddenly fatter on one side. The cause of this sudden shadow growth lay prone under the bulging side of the great rock, peering out intently between two large stones; and flaming curiosity consumed his soul. A stranger in a strange land, who rode innocently along a free trail and minded his own business, merited no such a welcome as this. His promptness of action and the blind luck in that bending forward at the right instant were all that saved his life; and his celerity of movement spoke well for his reflexes, for he had found himself fattening the shadow of the bowlder almost before he had fully realized the pressing need for it.

Minute after minute passed before his searching eyes detected anything concerned with the unpleasant episode, and then he sensed rather than saw a slight movement on the mottled, bowlder-strewn slope of a distant butte. A bush moved gently, and that was all.

To cross the intervening chaos of rocks and brush, pastures and draws would take him an hour if it were done as caution dictated, and by that time the chase would be useless. So he waited until the sun was two hours higher, pleasantly anticipating a stealthy reconnaissance by his unknown enemy to observe the dead. He had dropped into high grass and brush when he left the saddle and there was no way that the marksman could be certain of the results of his shot except by closer examination. But the man in ambush had no curiosity, to his target’s regret; and the target, despairing of being honored by a visit, finally gave up the vigil. After a silent interval a soft whistle from a thicket, well back in a draw, caused the grazing horse to lift his head, throw its ears forward and walk sedately toward the sound.

“Dearly Beloved,” said a low voice from the thicket, “come closer. That was a two-laigged skunk, an’ his eyes are good. Likewise he is one plumb fine shot.”

Ever since he had listened to the marriage ceremony which had subjugated his friend Hopalong for the rest of that man’s natural life, the phrase “Dearly Beloved” had stuck in his memory; and in his use of it the words took the place of humorous profanity.

Mounting, he rode on again, but kept off all skylines, favored the rough going away from the trail, and passed to the eastward of all the obstructions he met; and his keen eyes darted from point to point unceasingly, not giving up their scrutiny of the surroundings until he saw in the distance a little town, which he knew was Hastings.

In the little cow-town of Hastings the afternoon sun drove the shadows of the few buildings farther afield and pitilessly searched out every defect in the cheap and hastily constructed frame buildings, showed the hair-line cracks in the few adobes, where an occasional frost worked insidious damage to the clay, and drew out sticky, pungent beads of rosin from the sun-bleached and checked pine boards of the two-story front of the one-story building owned and occupied by “Pop” Hayes, proprietor of one of the three saloons in the town. The two-story front of Pop’s building displayed two windows painted on the warped boards too close to the upper edge, the panes a faded blue, where gummy pine knots had not stained them yellow; and they were framed by sashes of a hideous red.

Inside the building Pop dozed in his favorite position, his feet crossed on a shaky pine table and his chair tipped back against the wall. Slow hoof-beats, muffled by the sand, sounded outside, followed by the sudden, faint jingling of spurs, the sharp creak of saddle gear and the soft thud of feet on the ground. Pop’s eyes opened and he blinked at the bright rectangle of sunny street framed by his doorway, where a man loomed up blackly, and slowly entered the room.